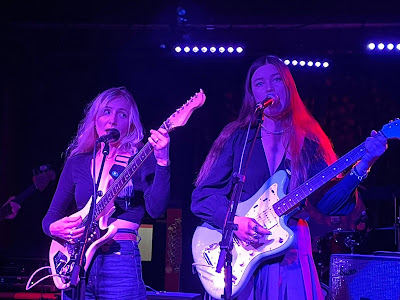 The hottest ticket in town on Saturday night was without doubt Wet Leg's sold out show at the Night And Day Cafe. With just two singles to their name, their Gorilla show in April sold out in no time so catching them in such intimate surroundings was an opportunity that won't come around for a long time given their meteoric rise so far. Their fourteen song set proved to doubters that there's far more to them than their breakthrough debut Chaise Lounge. Support came from Honeyglaze.
It's only a week or so since we first caught Honeyglaze at The Castle supporting The Lounge Society so the benefit of familiarity means that we know what to expect from them. Their songs still feel taut and fragile and on the edge of breakdown, but the sound tonight is much kinder to them, talking at the back aside, and the real beauty of their songs can be heard in the nuance and detail of songs like debut single Burglar and Shadows allowing us to fully appreciate them. Anoushka's vocals betray the emotional weight of the words she's singing at points and the sparsity of the guitars and drums bring that into even sharper focus and make them a compelling band to watch and listen to. 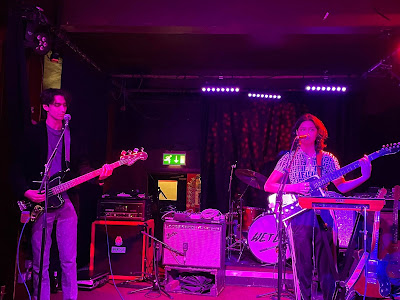 Wet Leg appeared seemingly out of nowhere with their debut single Chaise Lounge, having been signed after playing only four gigs. They've been out on tour with Declan McKenna and Inhaler recently and there's points where they're almost incredulous that the audience is here for them tonight, Rhian laughing when she gets to the point three songs in when she'd normally introduce them. Given that they've already sold out a venue three times the size of this six months in advance across town, it's something they're probably going to have to get used to. It's been a long time since we've witnessed so much love in the room for a band with just two singles to their name.
For a band with so little released material their live set is an impressively long one with fourteen songs played including a couple of first plays of Piece Of Shit, which has Rhian in almost uncontrollable fits of giggles when its title is mentioned, and Loving You. There's already a couple of songs that scream single at us even on first listen - Supermarket and Angelica, the latter being even more earworm and infectious than Chaise Lounge and more palatable to those who've already dismissed them as a novelty band. 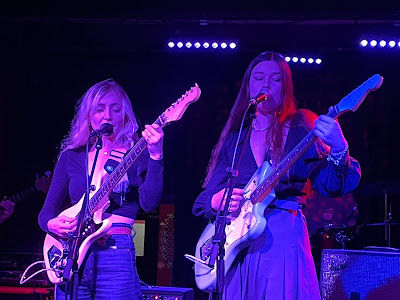 They're far from that; their live show has an impressively bulked out sound to it with three guitars and bass at points, two with keyboards at others yet it doesn't compromise the intrinsic playfulness at the heart of Wet Leg. There's a real variety to the pace and direction of these songs too, the moments where you can let loose to them more prevalent but also points in the set where they slow things down and become more reflective. Hester takes on lead vocals on Convincing towards the end of the set too with Rhian joining the others in providing the lift that the backing vocals crucially add to much of the set.
Wet Leg will split opinion without doubt yet this is a good thing - there's nothing worse than music generating a disinterested shrug. Po-faced perfectionists will despise them, they'll be derided as fakes or plants by those they bypass on their way up in the way others have recently, yet there were two hundred and fifty who adored them tonight who clearly think otherwise and plenty more waiting for the opportunity to and no one seems more surprised about that than they do. The absolute joy and sense of disbelief that there's a room full of people here just for them is something hopefully they'll never lose because it's so refreshing to witness.