TRACK OF THE DAY : VLURE - Heartbeat 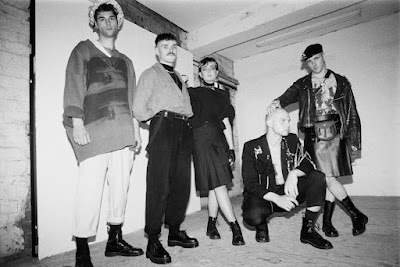 VLURE have today released Heartbeat, their second single in quick succession to be taken from their Euphoria EP due in January. Another live favourite, the song is very much aimed at the dancefloor, both in terms of the music and its lyrical content.

Set to a booming drum and bass backbeat and with Hamish's heavily-accented vocals front and centre, as he demands with increasing frenzy "Give me a release!" VLURE really don't sound like anyone else, their influences spread so far and wide yet fused together into something that sounds unique, uplifting and ultimately empowering. Heartbeat is about letting go of your inhibitions, escaping everything that weighs you down and losing yourself in the wildest night out of your life.

The band explain the meaning of the song - “It starts on the tips of your fingers and soles of your feet. A faint pulsing energy as the anticipation builds, it’s warm and the dense air adds to the atmosphere. Condensation blurs and streaks the light, you only catch snippets of movements when silhouettes briefly light up to show you the full figure. You do not want the night to end. Take it all in. This is opulence, this is escapism.”

The Euphoria EP features both previous single Show Me How To Live as well as Heartbeat as well as three further tracks that will be familiar to those who've experienced the live VLURE phenomenon - The Storm, I Won't Run (From Love) and the EP's title track and set-closer Euphoria.

The Euphoria EP is out on January 14, with vinyl to follow in March. A limited edition of 100 with lyric book is also available from Rough Trade.