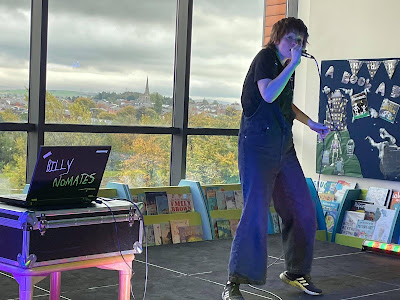 The latest in the series of gigs put on by Get Loud In Libraries saw Billy Nomates and Memes play a Sunday afternoon slot in Oldham Library with the Pennines in the background outside the glass windows behind the stage.
Glasgow's Memes open up proceedings with a half-hour set that's full of energy and anger at the ways of the world. Their recent single Heavy Night opens up their relentless onslaught of live guitar and bass and heavy backing track with John barking out lyrics laced with sarcasm and irreverent humour as well as social commentary when not rolling around on his back on the stage and in the space at the front of the crowd. They might not be familiar to most of the crowd but they very quickly win them over as they blast through a set of mostly released tracks like J.O.B.S, Funny Man, Blah Blah and Oll Korrect without pausing for breath save for a minor technical interruption. They finish on a six minute plus Cheer Up, double the length of anything that's gone before, that's a chaotic and wild end to a set out of fitting with the sedate surroundings of a library. 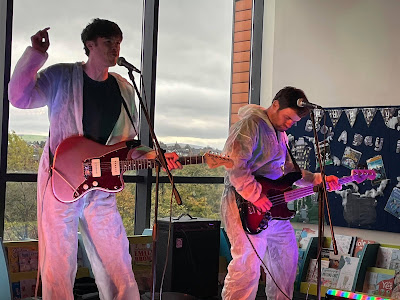 Billy Nomates is a one-woman phenomenon. Single-handedly winding up the sad wankers corner of the internet that thinks you need to have a band on stage to be a proper musician. Armed with just a laptop, microphone and a set of her own unique dance moves she rages war against injustice, inequality, misogyny and she does it with a smile on her face as she sticks the knife into the fat white man, the hippy elite and the work until you drop for minimum wage culture that she's suffered at the hands of. It's raw, visually challenging, the message unequivocal and straight to the point and ensures that people will leave with an opinion on her, one way or another, and the worst thing that a musician can do is generate a disinterested shrug. 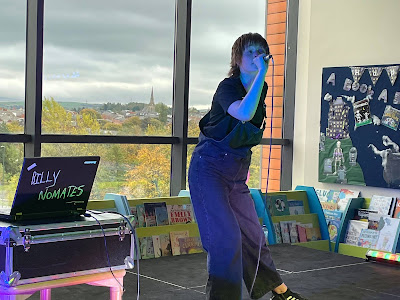 There's no worry of that as the Oldham crowd even start to move around a little despite the bright lights meaning there's no place for anyone to hide their shyness. The energy coming from the stage is infectious though, the style may be very much her own individual way of moving but that's what art should be, an expression of the individual through whatever medium they choose and we've all danced around our bedrooms without the courage to do it in front of a room of people. She takes us through most of her debut album plus a couple of tracks from the follow up Emergency Telephone EP during a non-stop forty-five minute set where she has little pause for breath. The roar at the end of each song is so unbefitting of a library that it highlights the genius of bringing music to these places. Billy Nomates might not fit the identikit image of a pop/rock star, but she very much is one in her own inimitable way.

Billy Nomates' official site can be found here and she is on Facebook and Twitter.  She plays Cardiff Clwb Ifor Bach (27).