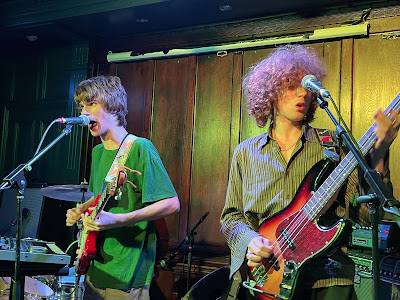 Wednesday night saw a packed out Music Room of The Castle Hotel in Manchester reverberate to the sound of The Lounge Society, a band at the vanguard of a second wave of bands from the Calder Valley following in the footsteps of Working Men's Club in their own way and fellow Speedy Wunderground signings Honeyglaze.

Honeyglaze are fascinating. Their songs move from the fragile and skeletal, introduced by a line or two of poetry that seem to bear no reference we can deduce to the song that follows, but works, to the urgent crispness of jangling guitars played to the point at which you'll think they'll break. They've only released their debut single, Burglar, a month ago so they're still very early in their journey as a band but the Manchester crowd warms to them very quickly as they get through ten songs plus the poetic interludes within their half hour slot. 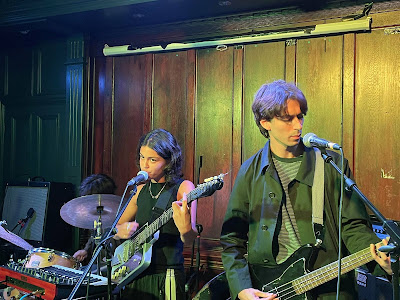 They describe themselves as an "ungodly fusion of three humans into a clamouring superorganism" and there is very much the impression that they work together as a team with a sum greater than the individual parts as they work together so well. Anoushka's vocals complement perfectly Yuri and Tim's rhythm section, whilst backing vocals lift the songs when they need them to broaden the punch and kick at the right moments. This allows them to successfully deliver the quite broad palette of songs that make up their set that make them a band to keep a close watch on.

The Lounge Society are on something of a roll after widespread acclaim for their Generation Game debut, Silk For The Starving EP and their brand new single Last Breath that came out this week and a series of festival performances that have cemented the buzz around them across the country. These two intimate shows at The Castle, of which this is the first, sold out immediately six months ago so they're on close to home territory tonight and on a safe bet, yet you wouldn't know it from the way they launch into Cain's Heresy from the EP as if they were out to impress complete strangers who would dictate their existence.

Last time we saw them was on a big stage outdoors in Cathedral Square in the rain, but here you can see the whites in their eyes, every single expression and awkward dance moves, nothing in lost in translation or lack of participation. Cameron is completely lost in the music completely, in a world of his own, oblivious to those around him, but if you watch them all closely there's an intuitive connection in the way the four of them come together, balancing on the precipice on the likes of the EP's closing Valley Bottom Fever and Heather, where we're asked to dance or leave, and the pure adrenalin headrush acceleration of the unreleased Numb. Herbie, Hani and Cameron interchange guitars and bass through the set, each bringing their own style to the instruments, keeping everything fresh whilst Archie's drumming flits from military precision, the end of Generation Game feeling like he's bombarding us into submission with machine bullets, to dictating the direction the song takes next. 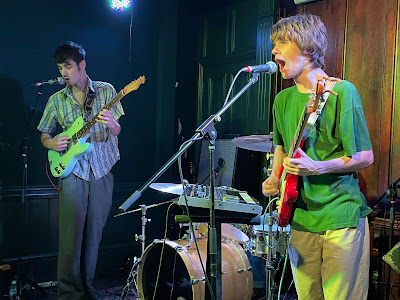 The foot's rarely taken off the accelerator through the hour-and-a-bit eleven song set that reveals they've got more songs like Money, Remains and No Driver that are awaiting their turn in the spotlight to shine, each of them identifiable by their DNA, but with a personality, strength and unstoppable momentum of their own that's quite impressive and rare for a band that's still in its teenage years.

Whilst bands have shown promise at that age before and then faded, there feels like a real sense of purpose here, not too cool to plug their merch for instance whilst retaining their sense of social and political injustices, that will serve them very well. You sense the curious being drawn in alongside the friends, family and early adopters as the set progresses, tentative dance steps being taken when you sense the point that a full room is throwing themselves around to them isn't too far around the corner.

Email ThisBlogThis!Share to TwitterShare to FacebookShare to Pinterest
Labels: Honeyglaze, The Lounge Society