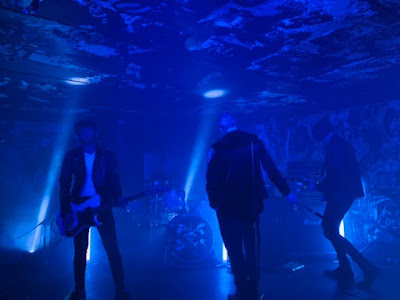 On a bitterly cold Wednesday evening in the North East of England we were left to the highly impressive Humanist to warm the cockles of our hearts with a performance way beyond our already huge expectations.

When Rob Marshall released one of the albums of 2020 under the eponymously titled Humanist a big marker was put down and if there was ever any doubt as to how the live show would work, given the fact all round good human Rob had collaborated with a number of vocalists, then all fears were dispelled with the announcement that ex-Puressence frontman James Mudriczki was to take the helm.

Accompanied by one of Rob’s trusted lieutenants in Scott Pemberton on drums (both of them were integral cogs in two of the most underrated bands of all time - Lyca Sleep and Exit Calm) and the cool as fuck Del on bass sporting magnificent sideburns, a wicked studded leather jacket an ability to rock the foundations of wherever he plays his bass.

Humanist’s big expansive sound engulfs the small room and crowd alike. Rearranged dates and COVID can be the only explanation for a relatively small audience or maybe it’s just the people of Newcastle not appreciating what’s right before their eyes as they choose to pack out the local student haunts instead.

Regardless, the band put on a show that wouldn’t have you thinking they’ve only played a handful of gigs together. There’s venom in Rob’s guitar throughout, fire in the belly and vocal of Jimmy, dynamite in the sticks of Scott and TNT in the bass of Del creating an explosive sonic boom. It’s a wall of noise screaming at you with the majority of the audience screaming back at them in appreciation and celebration.

Taking to the stage with a typical no frills entrance the band let their music do the talking as the menacing opener Beast Of The Nation leaves a lasting impression. It all feels claustrophobic with the dirty bass and monster guitar gripping you tightly as Jimmy snarls and snaps like a man possessed. Such is the ferocity we all take a step back literally but we’re beckoned forwards again because this is a two way experience. 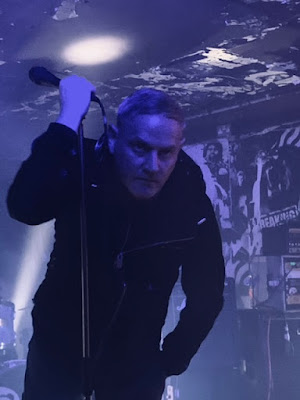 With no time to breathe or hear yourself think the band launch into a bone shattering Skull. Rob, by his own admission a perfectionist, reminds us all just how brilliant he is with some outrageous work. The sounds coming from his axe defying the fact it’s only he creating that melody. Booming choruses and emotive vocals lend a hand in taking the song to a new level when performed live.

Taking it down a notch or two with a chilled out, trippy Ring Of Truth and the shoegaze vibes of When The Lights Go Out it shows a band confident and assured. Visceral landscapes and kaleidoscopic noise counteract the backdrop of a dimly lit stage as Jimmy appears from the shadows before slipping back into them enabling the unassuming, shy Rob Marshall to take the deserved centre stage.

I can only run out of superlatives in describing Shock Collar. Call it what you want but I’m telling you it’s colossal. It’s monstrous. It’s beautiful. It’s magnificent. It’s the song U2 wish they’d written. Scott’s military style drumming, a rumbling bassline and huge guitars are the staple diet adding fuel to an unforgettable fire. The original has Depeche Mode’s Dave Gahan on vocal but James Mudriczki claims it as his own with a mesmerising, spellbinding delivery.

A close to ten minute epic of English Ghosts turns out to be the standout track of the night. Chipping away at your inner demons while prompting and probing you. Soul searching of the highest order against a relentless drum and bass, ferocious guitar and uncompromising vocal.

Beehive, the only track not from the eponymous debut, is trademark Mark Lanegan/Screaming Trees probably because Rob wrote it for Mark’s 2017 album Gargoyle. A proper organic rockers tune with soaring melodies and the catchy “Honey just gets me stoned” mantra. Collectively it’s a Molotov cocktail that ignites the crowd and the knowledgeable, enthusiastic crowd are left demanding more.

Concluding the evening with Gospel it’s left to Rob’s exquisite guitar playing to get more of an airing although all four members of the band are equally integral and Rob is very much aware of this. It’s a song demonstrating the endless search in the pursuit of faith. Heartfelt lyrics written by an emotional, unassuming, good soul and performed by a man with the voice of an angel delivering on the promise that these live shows would be special.

How far Humanist can go with this line up is anyone’s guess. It’s four uniquely magnificent musicians making music in the now. Music for the people, by the people and after talking to them you know these shows mean a hell of a lot to all of them. It’s a travesty that tonight’s show hasn’t had the full support it thoroughly deserves but it will remain long in the memory of those present as the night when Humanist spread their wings and brought joy and warmth to us all on the coldest of evenings.

Email ThisBlogThis!Share to TwitterShare to FacebookShare to Pinterest
Labels: Humanist