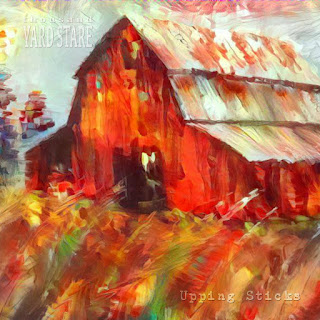 Thousand Yard Stare continue one of the most unlikely nineties reunions with their new single Upping Sticks, their first new material since last year's comeback album The Panglossian Momentum.

Upping Sticks will delight fans of the band who released two albums Hands On and Mappamundi plus a number of EPs and a compilation Fair To Middling in the early nineties before splitting up and then reforming in 2015 and releasing a Live At Electric Studios album, a double EP Deep Dreaming / Stargrazing before their first full-length in over a quarter of a century The Panglossian Momentum last year.

The song manages the neat trick of sounding warm and familiar to those who followed the band back then with the infectious melodies, driving guitars and Stephen Barnes' immediately recognisable vocals and intelligent lyrics very much to the fore. Yet, unlike many of their contemporaries, it also feels fresh and modern rather than dated and trying to recreate past glories.

Stephen explains a little about the song's subject and genesis - "Upping Sticks was originally realised as a song during the sessions for our 2020 album The Panglossian Momentum, but it was clear it was an errant child that needed to stand on it’s own; a black sheep of the flock if you will. Now seems the right time to release it, as we re-oil the wheels on our wagon after our enforced exile, and ready ourselves to re-integrate into the fringes of society."

"It’s been a favourite of ours that’s been clawing at the barn door for some time, and now it’s free to roam. The idea of the song spawned from the time honoured urban versus rural debate, which it could be argued, has led to the compromised vanilla of sprawling suburbia. But ultimately, it’s more satisfying to know we can still peel out a three and a bit minute adrenaline indie rock tune after all these years!"


The single is available from their Bandcamp.