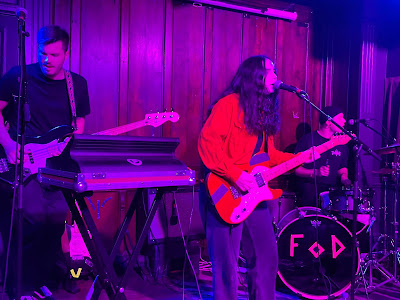 Francis Of Delirium played their first ever Manchester show at the Castle Hotel on Tuesday night. An energetic ten-song set featuring tracks from their two EPs as well as recent singles Come Out And Play and All Love and a brand new track won over an initially reticent audience as the set progressed.
They open with Lakes, which segues into Red, the first two songs from this year's Wading EP. Both songs start off slow and build to the choruses, led by tight rhythmic drum patterns that loosen as the chorus approaches. It's not a new trick but it's one that Francis Of Delirium show themselves to be particularly adept at; the third track, the unreleased Funhouse, picks up the pace yet also shows depth to their songwriting, ending in a crashing flurry of drums, and, for us, is the highlight of the set. It's followed by their new single All Love, again more expansive than the tracks from their early EPs; particularly impressive when the three of them join forces vocally and you feel the song lifts. They're very very good but at this point the audience reaction has been nothing more than polite.
The set takes a turn half way through the fifth track Circles where Jana takes over solo and the intensity and ferocity feels ratcheted up a level and the audience start to respond. It's a tough act for a travelling band to come to a new place and play to people for the very first time who are stood there arms folded demanding to be impressed and many don't succeed - yet the second half of the set feels like a breakthrough. Let It All Go and recent single Come Out And Play are uplifting songs with the jagged edges still protuding out with Jana's personality writ large across them while Jeff and Denny beef the songs up with a rhythm section that's powerful and driving. They don't look at each other or say a great deal to each other, but the sense of connection between them feels strong. 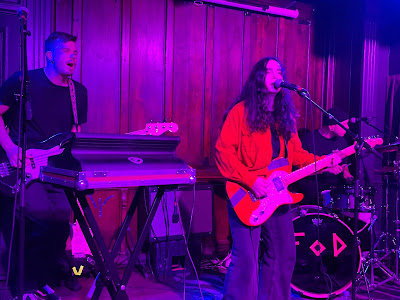 I Think I'm Losing slows things down a little without breaking the momentum that they've built as they head towards the end of the set. Ashamed starts with Jana telling us that we can dance to it and the crowd start to move, cautiously mind but they're won over now. They finish on Quit Fucking Around, their most streamed track to date, with a simple chorus that has the audience singing it back and then they're gone leaving a really positive first impression - gauged by the fact that most people stayed at the merch desk to pick up a vinyl or t-shirt, usually the best barometer of such things.
Francis Of Delirium's website can be found here and they are on Facebook and Twitter.
They play London Folklore (October 20), Ramsgate Music Hall (21), Bristol Crofter's Rights (22), Worcester Drummonds (24) then join Coach Party at Oxford Bullingdon (26), Guildford Boileroom (27) and London Omeara (28) and play London Sebright Arms (February 2).
________________________________
Follow Even The Stars on Twitter at @eventhestarsuk and like our Facebook page for all the latest updates
Posted by Even The Stars at 23:29

Email ThisBlogThis!Share to TwitterShare to FacebookShare to Pinterest
Labels: Francis Of Delirium