TRACK OF THE DAY : Before Breakfast - I'm A Good Friend 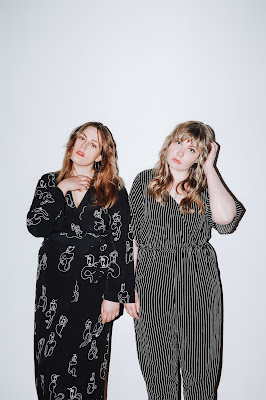 Sheffield's Before Breakfast, aka Lucy and Gina, release their new single I'm A Good Friend today, the latest track to be taken from their forthcoming debut album I Could Be Asleep If It Weren't For You. The single and video deal with the torturous process of dating and the cycle of attempting relationships that are doomed to failure when the other party is not emotionally mature enough to deal with the situation.
Lucy explains a little more about the track - "Don’t tell your single friends, ‘it’ll happen when you least expect’, ‘you’re too picky’, ‘isn’t there anyone at work? Their loneliness is real and these go to phrases have never helped. I’m A Good Friend is a goodbye to all of the non-committal men that have plagued my life. You don’t always have to tell yourself to feel optimistic about dating when experiences tell you it’s hopeless. Keep your high standards and trust your gut."
It's accompanied by a video depicting one such man trying to explain his feelings and failing miserably. Shot at Sheffield Park Hill flats, it's an essential accompaniment to the song as it plays out the themes within the song.  It's the follow-up to their last single Wreck, which only came out in August and will also feature on their debut album I Could Be Asleep If It Weren't For You, which dealt with the breakup of Gina's last long-term relationship, continuing the band's exploration of themes and societal expectations and pressures on women entering their thirties.
Before Breakfast's website can be found here and they are on Facebook and Twitter.
I Could Be Asleep If I Weren't For You is released on January 14 and can be preordered from Piccadilly Records.
They play Manchester Levenshulme Talleyrand (October 16), York Live At Forty Five (23), Leeds Brudenell Social Club (31), Otley Black Horse (November 20) and Sheffield Upper Chapel (December 18).
________________________________

Email ThisBlogThis!Share to TwitterShare to FacebookShare to Pinterest
Labels: Before Breakfast