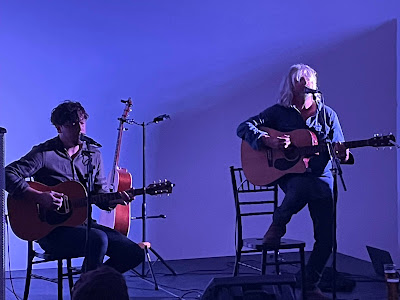 John Bramwell continued his never-ending tour of the UK with his first show in Edinburgh for four years at the splendid Old Dr Bells Baths at the foot of Leith Walk performing a set of I Am Kloot classics interspersed with tracks taken from his Full Harmonic Convergence's upcoming The Light Fantastic album, accompanied and supported by Dave Fidler.

The evening is opened up by Dave Fidler, who's either familiar to the audience from previous shows with John, or who by the end of the evening, judging by their reaction to his seven-song set, very much will be in future. Described by John in his opening introduction as "my favourite songwriter" he demonstrates just why with a batch of songs that demonstrate his mastery of the six-string guitar, particularly in the instrumental Tommy, an homage to one of his heroes Tommy Emanuel, and his ability to craft songs that trade in the basic human emotions around family and friends, like the emotional Easy Gone Easy Come about his son Dylan from his debut album I'm Not Here. 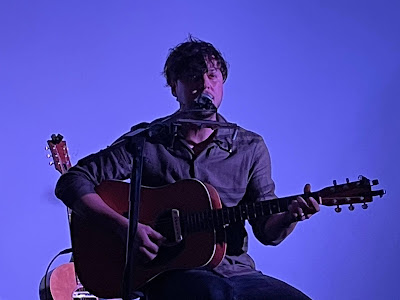 With a third solo album in the works for next year, from which we're given a sneak preview, including a duet with John on a song called Higher at the end of the night, it's hoped he'll get at least a proportion of the acclaim reserved for the likes of Elliot Smith and Nick Drake who Dave tells us Skylark, from his last album Songs From Aurora, was sandwiched between on Radio 2, as there's plenty for fans of those two artists to love here.

Towards the end of his hour and a half set John comments on how much he loves the convivial atmosphere of these smaller shows he's playing compared to big halls; the intimacy and audience's complete attention to the songs and performance in this beautiful converted swimming baths that is perfect for this type of event very much make us feel we're attending something special, more than just a gig.

That sense is accentuated by the fact that we're listening to I Am Kloot songs that could fill those big halls stripped down to the barest of bones and their most natural of forms and they're more beautiful, affecting and poignant than they are fleshed out with other musicians. There's so many of them too, that people join in for, the accordion solo on To The Brink is sung out of time and out of tune with restraint from the Edinburgh crowd, but "artistically correct" as John tells us. One look round the room and there's people eyes closed mouthing along every word to these songs, living them as if they'd come from their own pen because the magic in these songs is the brutal honesty in which they depict feelings, experiences and reactions that we've all, man or woman, old or young, got the ability to relate to. 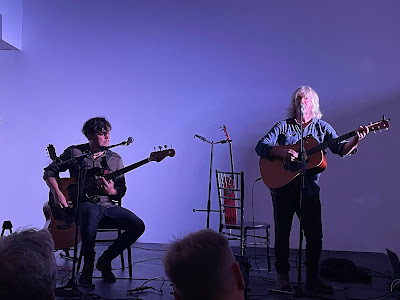 The new songs, which John has written and recorded with the Full Harmonic Convergence and has performed for the past few months with various iterations of that band, feel like sketches, intimate and revealing in this skeletal form, but brimming with possibilities of other instruments layering magic on top of them. As John says, half bragging half laughing, that even at 59 he's still very much got it - these songs - Before The Lights Went Out, I Am The Sky, Sky Full Of Thunder And Lightning, Days Go By - don't shirk in any comparison with the much-loved songs around them in the set.

John's in relaxed form too, self-deprecating as ever, calling himself a hairy dwarf and comparing himself to one of The Muppets' band at points in the set. He tells stories of Roddy Frame with affection, borrowing the "we've got all the bullets but no one left to shoot" line in Fingerprints from his High Land Hard Rain. He tells all his old jokes about writing songs after listening to La Vie En Rose and breaking up into small groups to discuss something and that no one laughs more at his jokes than he does - and everyone laughs whether they're hearing them for the hundredth time or the first because his disarming charm is quite impossible not to submit to.

He finishes on a singalong of Northern Skies and Proof, where the audience finally turn the volume up on their mouthing of the words before hiding at the side of the stage and returning to play Black And Blue, a song he wrote as a sixteen year old that he's still immensely proud of, and rightly so. You can draw a line from it, joining the dots to Before The Lights Went Out, the newest song he plays. His refusal to play the game the way it needs to have been played might mean he's not had the acclaim of some of his contemporaries who laud him as an inspiration, yet this audience, knowledgeable and attentive, know the deal. Modestly he invites Dave Fidler back on stage and joins him on guitar and backing vocals and harmonies for a song called Higher that sends everyone home with a smile on their face and a bit more love in their hearts.

He played Bigger Wheels, Mouth On Me, I Believe, No Fear Of Falling, Gods And Monsters, Fingerprints, To The Brink, I Still Do, The Same Deep Water As Me, Astray, Before The Lights Went Out, Who Is Anybody Anyway, I Am The Sky, Sky Full Of Thunder And Lightning, 86 TVs, Days Go By, Northern Skies, Proof and Black And Blue.

Email ThisBlogThis!Share to TwitterShare to FacebookShare to Pinterest
Labels: Dave Fidler, I Am Kloot, John Bramwell, John Bramwell And The Full Harmonic Convergence