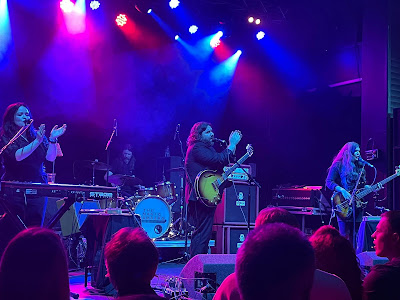 The Magic Numbers belatedly celebrated the fifteenth anniversary of their self-titled debut album with a show at Manchester Academy 2 on Tuesday night, playing the album in full in order including their first hits Forever Lost, Love Me Like You, Love's A Game and I See You, You See Me. Support came from Salford's own Ren Harvieu with a mix of tracks taken from last year's second album Revel In The Drama and brand new songs.
At times there's seven people on stage, including Romeo and Michele from the headliners, but all eyes and ears are on one woman and her show stopping voice. Ren Harvieu has been something of a local heroine around these parts since she broke onto the scene with her debut album Through The Night, hitting the top five whilst recovering from a freak accident where she broke her back. Tonight she plays absolutely nothing from that album, a brave move, but a totally understandable one from an artist determined to make her own way in the industry, playing songs that come from her heart and in which she had a central role in the creation of one, making them intensely personal. Last year's Revel In The Drama album was the first step in that process, eight years on from her debut. Tonight very much is about revealing the next steps ahead of her own headline tour next month. 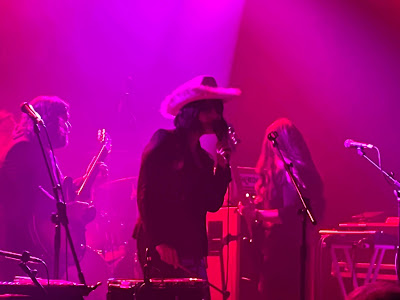 The new songs very much have her mark all over them - focused less on trying to be commercial and more about expressing herself in the way she wants to. From the opening Toughen Up Love, which feels like an instruction to herself, to Salford Superstar, which recollects a talent night as a teenager at a working men's club the now demolished Mocha Parade and Is It Love, where she adopts a second microphone to deliver a vocal with effects, it's abundantly clear that she's doing things her own way now. The songs from Revel In The Drama - Yes Please, Strange Thing, Teenage Mascara and the set-closing Curves And Swerves - are delivered with the confidence of someone making art that she's happy with and which is true to her. Combine that with that voice and you have something magical which demands your undivided attention.
We've never been fans of this classic album format. For one, albums are not sequenced like a gig. The Magic Numbers is heavily front-loaded in terms of the faster, more upbeat tracks as was the case with most long players when they released this album in 2005 (and still is predominantly the case) and that can give an uneven balance when traditional set-closer Mornings Eleven opens up the gig and Forever Lost and Love Me Like You are dispensed of early on. Secondly, the audience tend to know just the singles so there are large periods where people are stood around and rather than listen chat with whoever they're with, usually on the slower numbers. It happens tonight, but because The Magic Numbers was such an important album for us in 2005, we saw them fourteen times that year and were on first name terms with them, we were happy to let our reservations slide and lose ourselves in the music like the two brilliant slightly worse for wear women dancing throughout to our side reciting every word as they did.
What's often overlooked with The Magic Numbers' debut is their musicianship. This evening is no turn up and play the album verbatim event. Those singles are delivered with a much harder edge, the vocal harmonies more uplifting and perfect in the flesh than on the record, whether it be in the head rush moments of Long Legs and Love Me Like You or when things are slowed right down on a drop dead gorgeous Which Way To Happy and Wheels On Fire, which demand, and get for the most part, absolute attention and respect. 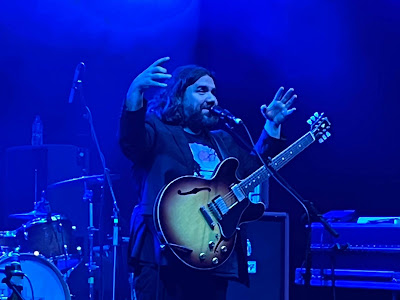 These songs are played with a freshness, the band's obvious love of playing live has never diminished over time even if they're not pulling the crowds they did at their peak. It was never about commercial success, as Romeo inadvertently and long-windedly alludes to as he tells the story of the band, the decade-long partnership between himself and drummer Sean before they realised the solution to their ever-changing band line-ups was with their younger sisters. The moments of connection, when the audience join in en masse or when three vocals combine to give Don't Give Up The Fight and Love's A Game an exhilarating soaring lift, are beautifully genuine, the smiles on the band's faces as excited as they were the first time they made them back when these songs were turning them from a school gymnasium band to the hottest new band in the country for the six months that preceded the release of this record.
They finish the evening with a raucous This Is Not A Song, the key track from Those The Brokes, the follow-up to The Magic Numbers and a long stretched-out jam of Sweet Divide, the lead single from their last album, 2018's Outsiders with two of Ren's band joining in on brass. It's a typically Magic Numbers move, to finish on a song that eschews the traditional send them out the doors buzzing with a big hit approach to encores. They were always much more than the cartoon characters the sleeves of their debut single Hymn For Her and the album promo CDs portrayed them as and the singalong singles that broke them and whilst tonight confirms they could produce radio-friendly earworm anthems with the very best of them, it also evidences that they were and still very much are a live band whose influences and talents stretch far beyond those false first impressions. It might have been a dark cold Tuesday night, but this was a timely reminder that gigs can be full of fun and joy.
The Magic Numbers played Mornings Eleven, Forever Lost, The Mule, Long Legs, Love Me Like You, Which Way To Happy, I See You You See Me, Don't Give Up The Fight, This Love, Wheels On Fire, Love's A Game / People Get Ready, Try, Hymn For Her, This Is Not A Song and Sweet Divide.
The Magic Numbers' official website can be found here.  They are also on Facebook and Twitter.