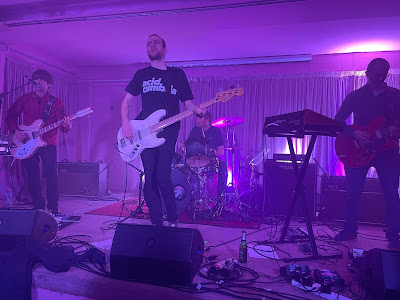 The Lucid Dream finally brought their The Deep End album to the Pink Room of Yes in their second home of Manchester on Saturday night for an ecstatic seventy-minute trip through their growing collection of five albums supported by Pray For Mojo.

Pray For Mojo open up the evening with a set that gets the crowd warmed for what's to come. The Warrington band's performance is energetic and intense, whether it be in the moments where they head off into psychedelic instrumental sections or when they feel more like a traditional rock band. They pull off both; recent single Oh Me, Oh My, Oh Mine sits more in the latter camp but as it merges into their final song Salvador they spread their wings out and become more expansive and adventurous, switching vocalists and taking off into longer instrumental sections that will serve them well in a very cluttered scene right now where it's hard to stand out. 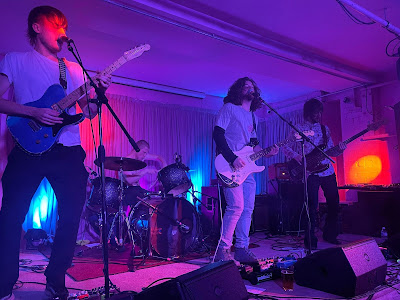 The Lucid Dream do of course. They're a one-off right now, eschewing the usual advice to create radio-friendly songs to follow their own path and create their own sound that's almost impossible to define, although we'll let bassist Mike's t-shirt do that job for us, proudly and defiantly describing them as "acid Cumbria"

Whilst they're away from home, there is a spiritual bond between the band and the city, as front man Mark breaks from habit and addresses the crowd to acknowledge the loss of John Hall, Denise Johnson and Chris Dench who'd formed part of the dedicated bunch of people who followed them from their early days in The Castle to the bigger gigs they're doing now. The crowd very much form part of The Lucid Dream experience - within two songs there's guys with tops off aloft on their mates shoulders and as the set progresses the pit of people dancing around, one minute lost in the minute, the next hugging their friend or a complete stranger who happens to be next to them, grows. 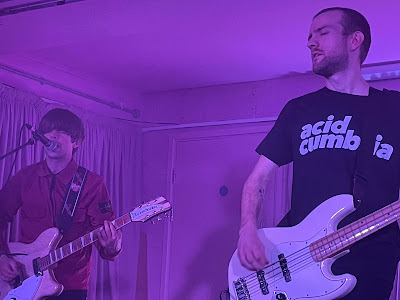 The songs, if you can call them songs as in many cases they go beyond that simple definition into a multi-headed sonic experience, guitars and synths married in union with drums sitting dead centre holding the whole thing together taking the audience on journeys that don't need words most of the time that often stretch past the eight-minute mark, particularly the closing trio of Ardency, Coalescence and Epitath which make up about half of the set length.

The audience's elation at losing themselves in the music is mirrored on the stage, Mike standing in the centre acting as the leader of the throng, mouthing lyrics and encouraging the front rows to immerse themselves deeper. Bad Texan, CHI-03 and SX-1000 have them bouncing along to the music in a show of unison. They are invitations to let go of whatever frustrations and focus on the sounds The Lucid Dream create and to use them as a means of catharsis for an hour or so - and that's what music should be about.

Email ThisBlogThis!Share to TwitterShare to FacebookShare to Pinterest
Labels: Pray For Mojo, The Lucid Dream