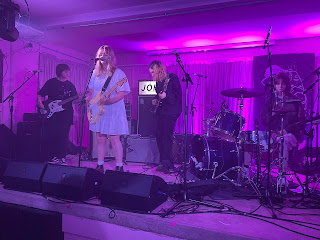 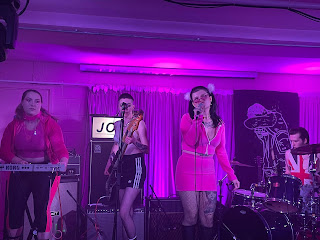 The start of our Thursday night gig-going saw us in the Pink Room of Yes to capture The Red Stains and wych elm, two of our favourite new acts in very different ways, open up for John.
The Red Stains are very much a band on the up. The introduction of Cesca to the band has breathed new life and energy into them, both visually and sonically after being very quiet over the course of lockdown. Whereas before their chaos was unpredictable and had potential to end in disaster, now there's a sense that they've got control of it without losing any of the madness such as when Natalie heads down to the floor, dances in the face of two guys doing their thing and then wonders how she's going to get back on stage without flashing everyone or as she describes them as Manchester's best Spice Girls tribute band. Her stage presence now still has the unmistakable Glasgow charm it always had, but now she knows how to get a crowd on side - by the end of the set the growing crowd are eating out of the palm of her hand as the huge roar as they finish their wild, weird and wonderful cover of Madonna's Material Girl. 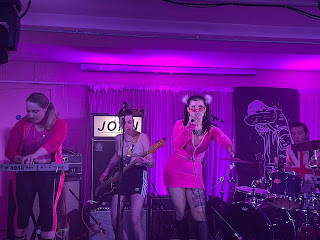 Their own songs have gone from being exciting but unstructured to targeted and potent, the rhythm section of Ben on drums and Sterling on bass combining with Cesca's keys and samples. It's in the detail, such as the short train sample at the start of Jump The Met that sees Natalie impersonating a train along the front of the stage, but there's not one of the older songs like Mannequin, Trolley Dashers, Pacer Train and Mother's Ruin that don't feel as if they've gone through a transformative reinvention while new single Smile feels like the hardest kick with the sharpest heel right into the bollocks of the patriarchy but delivered with a cheeky wink and grin. You'll still love them or hate them, but you'll have an opinion on them either way and people will judge you on it.
wych elm's recent Rabbit Wench EP felt like a bolt out of nowhere; a potent powerful statement of intent telling dark deeply personal stories of subjects at a level that most artists are too afraid to reveal and delivered with an anger and directness that will unsettle and shock. Even with Caitlin clearly struggling with her voice through overuse, not surprising, even given that they truncate their set to just under twenty minutes and eight songs, because she leaves nothing behind as she tells these stories, every bit of pain and hurt expelled in these one to two minute explosions of vitriolic realisation and revenge. 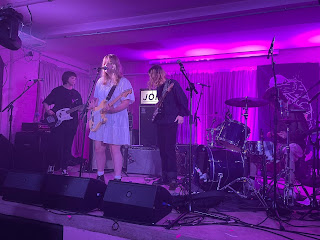 Five songs from Rabbit Wench - Executioner, Scold's Bridle, Brute, Wench and Feed Me - are delivered with the same intensity as on the record and draw the audience forward and into the music, sucked in by the live show as much as we were by the stream we found them on. Caitlin's vocals have that rasping piercing quality to them, despite the issues, that ensure every word hits home. Set opener Monkey Jaw, 1983 and closer Susan Smith come from their previous EP Rat Blanket and make us wonder why they'd gone under our radar. One of the two guys jumping around at the front asks them if the songs are originals. Once we get over the shock, we realise it's because wych elm sound at face value like the perfect modern incarnation of many of the very greatest rock bands of the last thirty years without ever sounding like they're copying them.