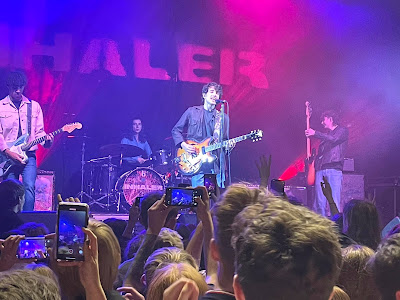 Inhaler completed their sold-out UK tour in support of their number one album It Won't Always Be Like This at The Ritz in Manchester on Tuesday night supported by Wet Leg and Dylan Fraser. A thirteen-song set featuring all but one songs from the album and three pre-album tracks showcased a band passing through on their way to much bigger things.
Dylan Fraser opens up the evening and it's clear he's already made a positive impression on the Inhaler hardcore who get referenced at various points in the evening by all three artists on the bill. Writing songs from personal experiences about bad relationships and the mental health implications of them they touch a nerve with large parts of the audience, particularly I'd Rather Be Here and his closing song Nightmare which are taken from his recent The World Isn't Big When You Know How It Works EP. 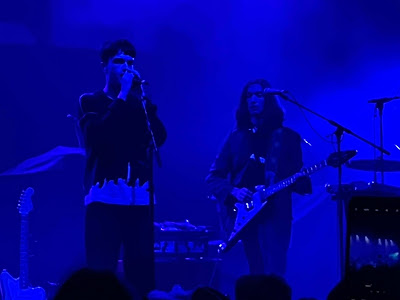 Musically upbeat, mixing a live band with judicious use of backing tracks, he creates a sound that grabs your attention even if you're unfamiliar with his work and one which works particularly well live where his accented vocals give a real sense of authenticity to the performance. His rambling introductions to songs might betray a little bit of nerves on these big stages, which he acknowledges when referencing his Bathgate roots, but it shows us that he's out their living his dream right now and good luck to him with that.
We weren't sure what to expect with Wet Leg - the 6 Music crowd fawning over their debut single Chaise Lounge, which we weren't sure wasn't some sort of novelty single, and the surrounding hype of them booking US dates on the back of it, almost unheard of these days, led us to be suspicious. We needn't have worried though. For a start their sound is much harder than we expected, causing circle pits to open to our, and very much their, surprise. 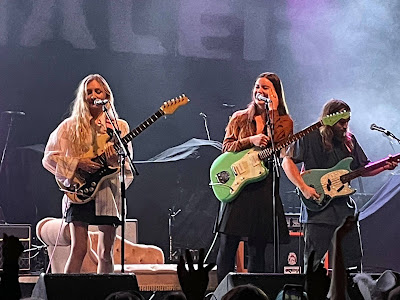 Like Dry Cleaning, they may well be an acquired taste for some and create views on them at opposite ends of the scale but never indifference - definitely a good thing as indifference is the worst emotion music can generate. Their songs are full of sharp, jagged edges with half-sung half-spoken stories that repeat themselves, feel like they're full of in-jokes and double-entendres that you'll get the more you listen, but they pretty much fully dismiss the fears we had about them before they come on stage. Even the cheesy sight of three men bringing on a chaise lounge that someone has gifted them and them erupting into fits of giggles at the surprise gift leaves us smiling.
It is Inhaler's night though; the last night of a tour that's seen them elevated to selling out venues like this months in advance with spares at a premium on the back of their number one album It Won't Always Be Like This. By the end of the night it feels though like we've witnessed a band on a stopping off point to arenas and further down the line stadium. The sprung Ritz dancefloor is given one of its most strenuous workouts and we find ourselves moving from one side of the room to the other and front to back under the sheer weight of the crowd's momentum as fifteen hundred people lose themselves in a set of thirteen rock songs that have all the power, gravitas and energy you'd expect from a band with such a burgeoning reputation. They might be just one album into their career, but, set length apart, walking into the room unaware of that you would never have known.
Kicking off with the album's title track the band's progression over the past few months, let alone years, is immediately noticeable. A unit of five acting as one, backing vocals from Rob and Josh giving the songs the lift and impetus at the right moments, every one of these thirteen songs feels crafted to have maximum impact whilst still feeling heartfelt and delivered, at the end of a grueling promotional cycle and tour, like they were playing it on an opening night.
The big moments are just that; powerful and consuming everyone within earshot. The opener, old favourite Ice Cream Sundae and the wild last stand of Cheer Up Baby and My Honest Face threaten the very foundations of the building. The quieter moments have no less impact, the lights-down ending to A Night On The Floor, the segue between the two parts of Who's Your Money On (Plastic House) mid-set are not a lull, which you could forgive with a band with a limited armory of songs, but an opportunity to show the depth and breadth they possess. 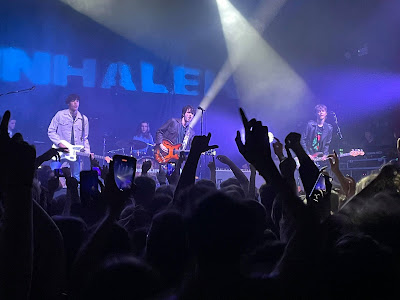 Eli doesn't say much, he doesn't need to. He dedicates a song "to the Irish", another one to "the fans", gestures to those raised up on their friends' shoulders and commends a crowd-surfer for his moves. Inhaler, refreshingly, let their music do their bidding for them. There's no attempts at trying to generate an atmosphere artificially, no encouraging the audience to create pits, to raise their arms in unison and to let loose - it all happens naturally as we're taken on their journey with them rather than being pressured into doing so.
Much has been made of the renaissance of guitar music. Most of it is nonsense. The phenomenal resurgence of Liam Gallagher aside, it's being used to prolong the life of turgid bands that should have been put to bed years ago and promote new ones that are just creating very pale reflections of what's gone before or who are being made to run before they can walk to their detriment. There's a very few genuine exceptions to this and Inhaler sit right at the top of that pile.
They've managed to capture both the audience with the disposable income to buy the dozenth plus variant of the album to project them into the charts and the young audience desperate for the communal buzz that comes with live music. The connections that have enabled their rise become irrelevant from the moment they start playing - as one of our friends says they don't mean anything if the band are shit and the industry is littered with kids falling into and failing to step out of their parents' footsteps. Our (irrational) hatred of U2 means we should despise Inhaler with every bone in our body, but there's three or four moments tonight, as a song drops just before the chorus lifts us all off our feet, that we get that surge of excitement, the thrill of the shared moment, where nothing but the music matters, that only truly special bands can command.
Inhaler played It Won't Always Be Like This, We Have To Move On, Falling In, Slide Out The Window, Ice Cream Sundae, When It Breaks, A Night On The Floor, Who's Your Money On (Plastic House), My King Will Be Kind, Totally, In My Sleep, Cheer Up Baby and My Honest Face.