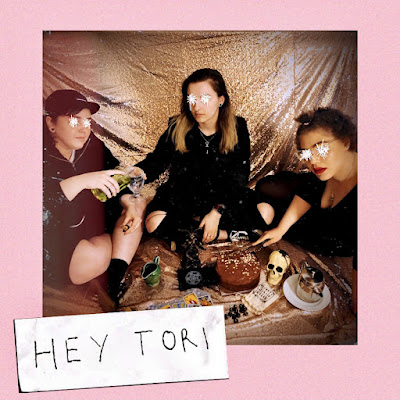 CHERYM are a three-piece from Derry who describe themselves as “three basic bitches” yet there’s nothing basic about this second EP although some of the caustic digs at some of the characters in the songs could easily be described as bitchy.
Three of the tracks here might be familiar; as is the wont of labels these days Kisses On My Cards, We’re Just Friends and Listening To My Head have already been released as singles, leaving just the last two Gone Girl and She’s A Lot Going On as the only brand new songs here. Hey Tori will however draw in a whole bunch of new fans as the noise around them builds around this release and their UK tour that’s just kicked off.
Listening To My Head sets down the marker, a breathless introduction to the EP lyrically and musically as Hannah rails against someone who’s cheated on her whilst turning her anger inwards at herself for failing to acknowledge the clear and obvious signs. Kisses On My Cards is very relatable to most people; an unrequited love that declares “I can make you mine if you just give me a try” but with the “you don’t even wanna talk about it” response from the other party that everyone will recognise from one platonic friendship or another. Two songs in and it feels so effortless for CHERYM - an infectious mix of pop and punk sounds that come together perfectly.
“Someone told me we were soulmates, I believed them because it’s true” opens up We’re Just Friends, a more positive spin on relationships when you know you’ve found the one, references to matching tattoos and not being able to picture life without the other. Musically you wouldn’t notice the change in mood from the first two songs though as it’s full of the immediate hooks and delicious harmonies that you’ll have fallen for already.
That positivity doesn’t last long as Gone Girl reflects on being treated badly in a relationship opening up declaring “what you did was just too bad, you took everything I had, I thought you loved me, but instead you messed with my head.”  It does turn round although as the song progresses with the two fingers of “I’m doing alright now you’re gone.” The final track She’s A Lot Going On starts off playfully with a raspberry being blown and the EP’s most immediate hook before a word is sung - its key line as it picks over the uncertainty of relationships and friendships declares “I said I’d go and I’m just waiting for that lightbulb moment”
Hey Tori is a perfect introduction to CHERYM. It has the energy and excitement of a band early in their life unaffected by the industry telling them what they should sound like and what they should look like, influenced by their favourites but never copying them and singing about things that matter to them in their day to day lives that run in parallel to their existence as a band. Chaos sits alongside moments of beauty, the energy and anger hit the spot and the subjects will be ones we know all about.
CHERYM are on Facebook and Twitter. The EP is available from Alcopop's Bandcamp
They play Birmingham Sunflower Lounge (October 7), Royal Tunbridge Wells Sussex Arms (8), Middlesbrough Twisterella Festival (9), Brighton Green Door Store (10), Guildford Boileroom (11), Manchester Talleyrand (12), Newport Le Pub (13), Southampton Heartbreakers (14), Bristol Exchange (15), Edinburgh Sneaky Pete's (16) and Glasgow Hug And Pint (17).
________________________________
Follow Even The Stars on Twitter at @eventhestarsuk and like our Facebook page for all the latest updates
Posted by Even The Stars at 00:30

Email ThisBlogThis!Share to TwitterShare to FacebookShare to Pinterest
Labels: CHERYM