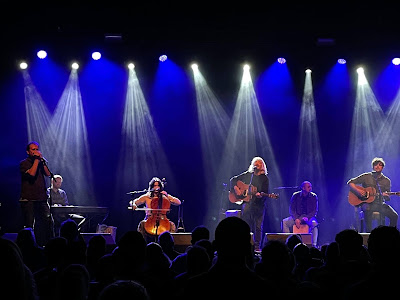 John Bramwell brought his Full Harmonic Convergence to Manchester's Ritz for a long-awaited and oft-postponed gig to showcase their forthcoming album The Light Fantastic as part of the Manchester Folk Festival supported by India Electric Co and Ellie Gowers.
It's Ellie Gowers first visit to Manchester as she excitedly tells us at the end of her opening song, a cover of Mimi and Richard Farina's The Falcon which is given a respectful treatment. Like the best folk story tellers she takes time to introduce her own songs and give some insight into the thought processes behind them. We're struck by the richness and depth to her voice that complements perfectly her subtle understated guitar - it gives a real sense of her personality in Waking Up To Stone, a reflection on the HS2 train line running through her childhood play spaces in her native Warwickshire, or Against The Tide from her most recent EP. 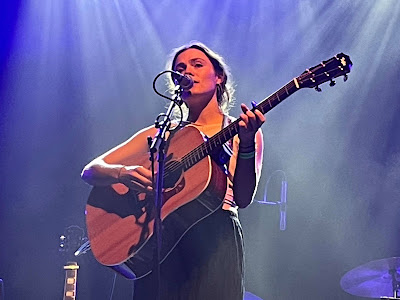 India Electric Co are a more energetic take on folk, taking songs from their two albums to date - 2015's The Girl I Left Behind Me and 2020's The Gap, from which Statues is the stand-out track of their set - plus their own inventive interpretation of Bruce Springsteen's I'm On Fire. Cole is an enigmatic front man, living out these songs visually as well as vocally as Joe and Aaron provide him the canvas. They're engaging, both with each other and the audience, who take to them well as the response they get grows as the set progresses to its conclusion with Eyes And Tears and My Friends Are Rich from the debut album. 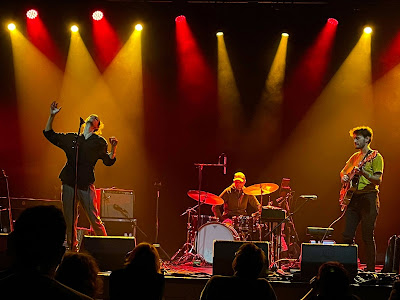 For the last two years John Bramwell has been touring with various iterations of The Full Harmonic Convergence between lockdowns and their availability whilst recording an album, provisionally called The Light Fantastic, which showcases a songwriter thriving in the company of musicians he loves and respects, referring to Dave Fidler at one point as the "best friend a man could have" and writing material that stands up against everything that's gone before.
It's testament to the confidence in the songs that of the twenty-three played, ten come from the unreleased album and four from his Leave Alone The Empty Spaces solo debut, whilst the I Am Kloot classics in the set like Because and The Same Deep Water As Me are reinvented for this expanded line-up and . Whilst other singer-songwriters might be happy to rest on their laurels, John clearly has unfinished business.
The band - Dave Fidler on guitar and bass, Harriet Bradshaw on cello, Andy Fidler on cajon and Alan Lowles on keys with Nigel Winn guesting on mouth organ on a couple of songs - are the perfect foil for John, adding light and shade to songs that started life, in most cases, in a dark place. Whilst this amount of new material in a set would ordinarily be an invitation for an audience to talk throughout, there's a hushed reverence at the beauty of these songs, the tenderness in Sky Full Of Lightning, the wistful bruised romanticism of World Full Of Flowers and The Light Fantastic in particular. 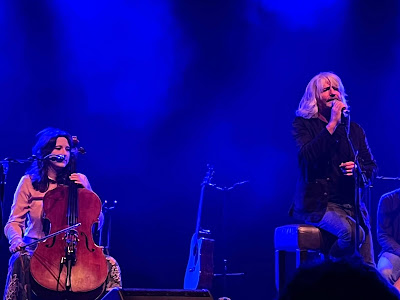 There's an energy to at the core of I Feel You and Here It Comes, both being played for the first time, that steps up the tempo and Nothing Left But You starts with a long spoken-word section accompanied by just a solitary almost not-there acoustic guitar; the sound of a writer pushing his boundaries without losing sight of why so many in this room hold him in high esteem.
John jokes at one point that comedians should watch him to get tips. Few people could get away with telling the same jokes at gigs for over ten years, yet John turns this itself into a joke, one that everyone in the room knows the punchline to, but still find as hilarious as they did the first time they heard it. His self-deprecating nature means he's forgiven time taken to tune his guitar throughout the show that would have less-loved artists chastised. He takes heckles from the audience in good nature and throws it back at them and when he thanks us multiple times for holding on to our tickets, we know it's genuine rather than the usual platitudes and he makes a beautiful heartfelt dedication to Manchester legend John Hall that's personal and real. 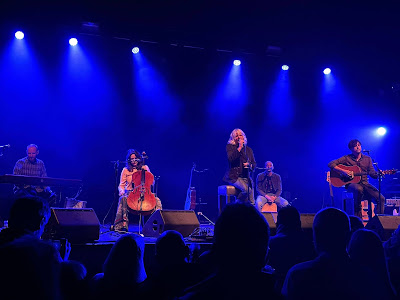 There is, of course, I Am Kloot material for those who've been on the journey longer. He opens with solo acoustic versions of Bigger Wheels and Mouth On Me and drops the likes of 86TVs, The Same Deep Water As Me, I Still Do and To The Brink into the middle of the set. He takes time to thank Pete and Andy from Kloot too.
The set finishes with the trio of a welcome resurrection of debut album favourite Because and his traditional closers Northern Skies and Proof that allow the audience the opportunity to join in and let loose their voices that they've been dying to made heard all night whilst they've listened intently to one of the country's finest songwriters showcase his newest and possibly finest work.
Ellie Gowers' website can be found here and she is on Facebook and Twitter.
India Electric Co's website can be found here and they are on Facebook and Twitter.

They played Bigger Wheels, Mouth On Me, Sky Full Of Thunder And Lightning, Element Of Truth, World Full Of Flowers, Who Is Anybody Anyway?, 86 TVs, When The Lights Go Out, Meet Me At The Station, The Same Deep Water As Me, It's Just You (Stepping Stones), The Light Fantastic, I Still Do, Sat Beneath The Lightning Tree, To The Brink, I Feel Me, Here It Comes, Time's Arrow, I Am The Sky, Nothing Left But You (On And On), Because, Northern Skies and Proof