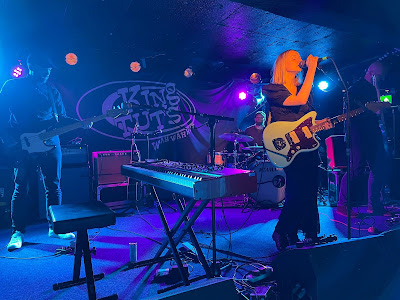 Lanterns On The Lake continued their much-rearranged UK tour with a sold-out show at Glasgow King Tut's Wah Wah Hut on a wet and cold Friday night. Despite being one woman down they put on a performance to warm the hearts and minds of the audience supported by fellow Bella Union artist Hilang Child.
Opening the show is Hilang Child who released his second album Every Mover earlier this year. Ed Riman, who records and plays under the pseudoynm, is joined by multi-instrumentalist Sophia. He moves from drums to keys, Sophia plays keys and sax and provides backing vocals that add depth and shade to tracks like Good To Be Young, Shenley, Anthropic (Cold Times) and Earthborne from Every Mover. The songs feel intensely personal, even in the moments where the drums kick in and break the intimacy and intensity of the words being sung. The Glasgow crowd warm to him as the set progresses, drawn in by the honest emotional content and delivery. 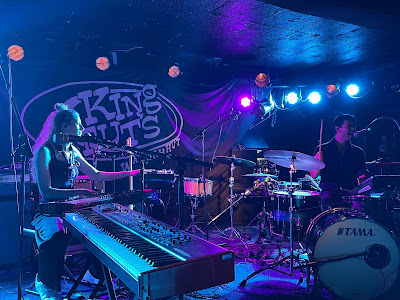 After a number of postponements Lanterns On The Lake aren’t going to let the illness-enforced absence of one of their number - violinist and multi-instrumentalist Angela Chan - derail tonight even if Hazel jokingly asks if any of us can sing the string parts in Swimming Lessons. What it means is that we get a unique gig, the harder edges of the songs are accentuated by the lack of the strings without compromising the intrinsic beauty and intensity of them.
They deliver on Hazel’s promise to “play our hearts out for you.” There’s moments of levity, particularly when Hazel launches into Locusts instead of Baddies and her band mates go with her in an impromptu setlist reorganisation and only mention it at the end, and a serious point where she dedicates Before They Excavate to the “COP lot” who are in town for their conference. Lanterns On The Lake very much, in the flesh at least, let their music do their talking for them.
The twelve song set features the whole of their Mercury Prize nominated Spook The Herd, the title track from its predecessor Beings. Through The Cellar Door and a brand new song Locusts. Whilst there are gaps where the strings would be, the band do their best to fill them, Paul’s guitars in particular take on an even more central part in the songs and his playing is visually quite breathtaking to watch at times. 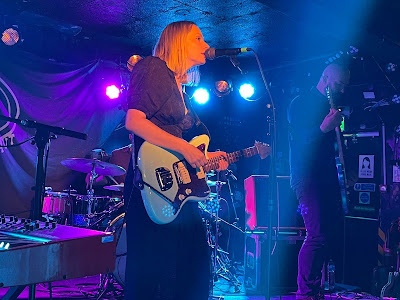 We’re then treated to an impromptu encore - “we haven’t played this song in seven years so forgive me if I get the chords wrong” Hazel asks jokingly - as she and Paul perform a guitars and vocals-only version of Ships In The Rain from their debut Gracious Tide Take Me Home.
The Glasgow crowd, the first time they’ve sold out King Tut’s, is attentive and receptive. The delicate moments in these songs could be ruined by talkers but there’s a mesmerising quality to these songs that ensure we have no such issues.
Lanterns On The Lake played When It All Comes True, Blue Screen Beams, Every Atom, Swimming Lessons, Before They Excavate, Through The Cellar Door, Secrets And Medicine, Locusts, Baddies, This Is Not A Drill, Beings, A Fitting End and Ships In The Rain.

Email ThisBlogThis!Share to TwitterShare to FacebookShare to Pinterest
Labels: Hilang Child, Lanterns On The Lake