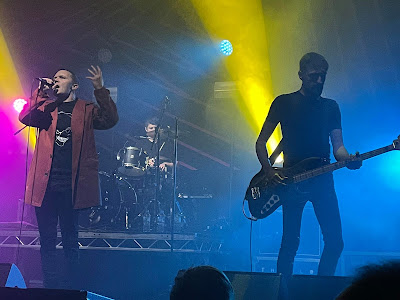 The Slow Readers Club continued their UK tour with their nearest-to-hometown show at Warrington Parr Hall on Friday night supported by Birmingham's The Clause and Wigan's Lynchs.
Lynchs open up the evening and their confrontational style is quite a contrast to what follows. Standing at the front of the stage staring at the front rows is an interesting approach but it's one in keeping with the way they approach their art. This might be the biggest stage they've played on, it's certainly by far the biggest we've seen them on, but they fill the room with the sound of early singles Think Responsibly and the set-closing Waxwing as well as their own take on Kraftwerk's The Model, which they turn into a Lynch's song with the electronics of the original replaced by crunching guitars. They go down surprisingly well with The Slow Readers Club crowd. 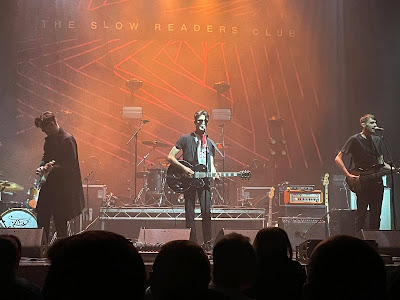 As do The Clause, the Birmingham four-piece's seven-song set is full of the well-structured songs that the headliners have made their strength - they understand the power of an uplifting chorus that lifts out of verses that build to it and have plenty of them in their locker - forthcoming single Cruella, Electric and In My Element being the best examples even if the sound is probably a little bit too loud and threatens to distort at times. In front man Pearce they have a vocalist with the power to command the room and your attention whilst the rest of the band also draw you in visually with their stage presence. They go down a storm with the room that's rapidly filling up as their set progresses and clearly win over a new set of fans. 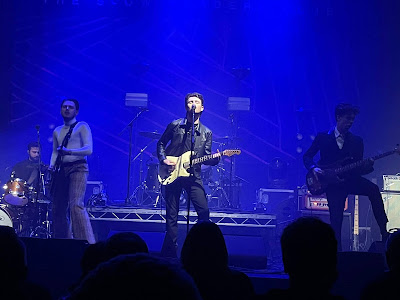 The ability to craft anthemic songs that grab you immediately is something The Slow Readers Club have mastered over the years. Whether it was the likes of Block Out The Sun, Feet On Fire, Forever In Your Debt and I Saw A Ghost that were hiding in plain sight for years off their first two albums or the likes of the more recent All I Hear, Killing Me, Two Minutes Hate and latest single Tell No Lies they are masters of crafting songs that never fail to lift you, and those around you, up and out of whatever is going on elsewhere.
They've taken themselves out of the small venue circuit they frequented for years to the point where halls like this, and bigger ones, feel like their natural home these days without losing that intimacy, that arm around the shoulder and whispered words of reassurance that has been crucial to their rise. These are songs that speak to people's vulnerabilities, the often unspoken ones and tell you that it's alright to feel like that, and in a room with a thousand plus like-minded souls, to actually celebrate them. A quick turn round from our vantage point at the front when I Saw A Ghost hits the section where the audience join in and pretty much every pair of arms, downstairs and on the balcony, are raised skywards. 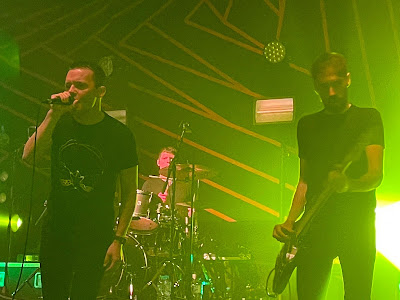 They don't mess about. Eighteen songs are dispatched in less than seventy-five minutes. They leave the fancy arrangements, elongated guitar solos and long monologue speeches to others, The Slow Readers Club are about short, sharp bursts of unbridled uplifting surges of adrenaline, a tight as rhythm section with Jim Ryan's strutting around stage deserving of a player cam in its own right. Sitting centre stage are Aaron Starkie's increasingly imposing vocals, impressive in range and power, allied to a more natural front man persona that he's developed over time as they've risen to play places like this. It'll serve them in good stead if the opportunities open up for them to step up still further as this is a sound that you pick up and drop into arenas and high-billing festival slots with no reservations. 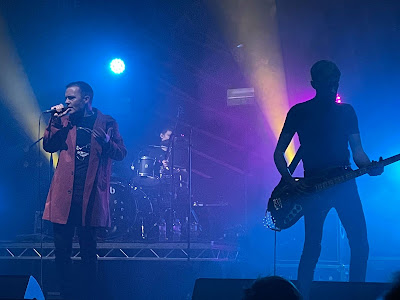 By the time On The TV, with its hook line that the audience threaten to drown out the band with such is the volume as they sing it back, and Lunatic reduce the front rows to one heaving mass, they've already won over any doubters or first-timers and reminded, like we could forget, those of us who've been longer on the journey with them why they generate so much love and affection from their loyal fanbase.
The Slow Readers Club played The Wait, Fool For Your Philosophy, You Opened Up My Heart, Plant The Seed, Killing Me, Two Minutes Hate, Jericho, Problem Child, Forever In Your Debt, All I Hear, All The Idols, Everything I Own, Block Out The Sun, Feet On Fire, I Saw A Ghost, Tell No Lies, On The TV and Lunatic.

Email ThisBlogThis!Share to TwitterShare to FacebookShare to Pinterest
Labels: Lynchs, The Clause, The Slow Readers Club