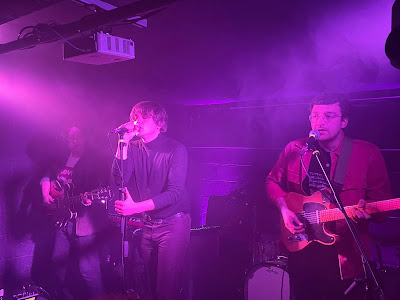 Neon Waltz are celebrating the completion with a short UK tour that took in the basement of Yes in Manchester on Monday night. Focusing on tracks from their debut Strange Hymns and subsequent interim releases while revealing one new track they left us wondering quite why they're not playing much bigger stages. Support came from Little Strange.
This is Little Strange's first gig for eighteen months, front man Jamie tells us half way through the set but there's very few signs of ring-rustiness in their sound as they power through half a dozen tracks that go down very well with the growing crowd. As a six-piece their biggest challenge is not getting in each other's way as they deliver a set that's heavy on their singles - Alright Now, Cosmic Girl, Let Me Go and Loving Only Gets You Down - as they refind their feet on the live stage. 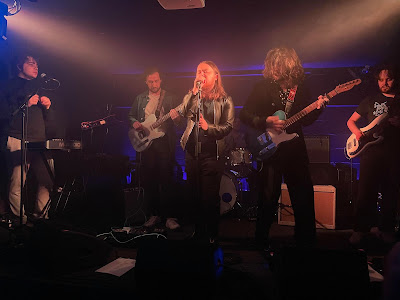 Heavy on guitars, but with keyboards also playing a part and Jamie's vocals sitting dead centre, their songs are very much groove-focused rather than trying to blow the audience away with power and that gives them a sense of familiarity without it feeling like they're trying to copy anyone in particular and that means the crowd warm to them immediately.
"You should do what you love while you can" Jordan declares on their set-closing Dreamers, a song so unflinchingly uplifting that it should be prescribed as a prerequisite in any self-help manual and a dose watching Neon Waltz perform is certainly strong medicine against the blues many feel as the last vestiges of summer turn into autumn and the dark nights draw in. 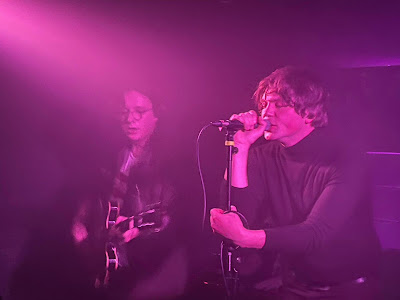 Songs like Perfect Frame, Heavy Heartless and Bring Me To Light from Strange Hymns soar effortlessly into widescreen choruses whilst later tracks such as Thanks For Everything, Strung Up and All In Good Time from the last release, 2020's Huna EP, demonstrate a broadening of their horizons whilst retaining the magic that drew most of this audience in. The one new track, curiously titled just AGAG on the setlist, is introduced half way through the set and feels like a further progression of their established sound on first listen. Even when they slow things down on an early single I Fall Asleep that sense of magic that pervades these songs doesn't dim, Jordan's warm reassuring voice as strong without the tidal wave of guitars and keyboards lifting him up.
The pandemic may have stopped them in their tracks as they prepared for album two, but it's feels like Neon Waltz have regrouped stronger and armed themselves for another assault on the fickle feted world of the music business. As we leave with the romantic optimism of Dreamers ringing in our ears, we're still puzzled at why they're not huge yet privileged that they're still the same wonderful band we stumbled across all the way back in 2014.
Neon Waltz played Perfect Frame, Friends Who Lost Control, All In Good Time, All Is Said And Done, Thanks For Everything, Heavy Heartless, AGAG, I Fall Asleep, Stranger Things, Strung Up, Bring Me To Light and Dreamers.
Neon Waltz's official website can be found here and they are on Twitter and Facebook.
Their tour hits Leeds Headrow House (October 26), Birmingham Actress And Bishop (27), Brighton Green Door Store (28) and London Hackney Oslo (29).
Our recent interview with them can be found here.
Little Strange are on Facebook and Twitter.
________________________________
Follow Even The Stars on Twitter at @eventhestarsuk and like our Facebook page for all the latest updates
Posted by Even The Stars at 17:00