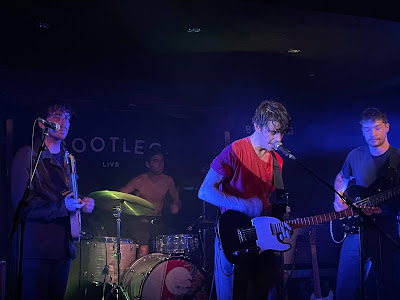 With their Manchester show clashing with other commitments we jumped on the train to Blackpool and the brilliant independent Bootleg Social venue to catch Egyptian Blue on the tour to promote their new single Salt ahead of their debut album next year supported by Grandma's House.
First up, a word about Bootleg Social. Whilst venues and gigs these days seem to be increasingly focused around the major cities, the owners of Bootleg Social are trying to buck that trend and bring established and up-and-coming acts to Blackpool and their intimate basement venue that has hosted the likes of The Slow Readers Club and She Drew The Gun in recent times. Tonight's turn out is disappointingly low, but the crowd that are there are appreciative of both acts and it's hoped that people will support them in trying to create something that stands out as a scene, as an oasis among the amusement arcades and stag and hen bars that proliferate in the town these days.
Grandma's House open up the show with a ten-song blast that lasts just over twenty minutes. What they don't give us in terms of song length, they more than make up for in terms of incendiary intent and quality with their nine songs released to date, including their current self-titled five-track EP, plus the set-closing Who Am I. With guitarist Yasmin and drummer Poppy sharing lead vocal responsibilities and bassist Zoe making it a trio at points, often in a call and response or repeating each other in sequence and the songs driven by powerful guitar riffs, tight taut drum patterns there's a real energy to them that wins over the initially reticent crowd that might be small in number, but who very clearly know their stuff. 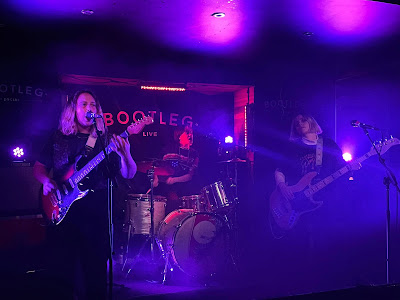 Whilst they're very much no frills, at no point do these songs ever sound like they're going back over old ground, whether it be the unpredictability of where the songs are going to go, who's going to sing the next line or whether they're going to suddenly stop dead. There's a wonderful flow and energy and a real genuine passion in each of the ten songs. Devil's Advocate and Girl are particular standouts if we had to choose and just to show they're not all dark, black and serious Pasty is an excellent tribute to a woman who sells pasties in their adopted hometown of Bristol with a line about "buy one get one free". With no frills, airs and graces, Grandma's House are a real back to basics rock and roll outfit and a really quite brilliant one at that.
Egyptian Blue recently announced their debut album alongside new single Salt, but tonight's set heavily focuses on their first two EPs with six of the nine songs taken from them with two new tracks Belgrade Shade and Skin alongside Salt making up the list.
You can almost sense their frustration at being held back from playing for so long such is the energy they expend during their set. Andy and Leith provide the rocket fire vocals that complement their spiky, thrusting guitar, bass and drums onslaught that's unrelenting across these songs, stopping, turning volte face and heading off in another direction as they go. Leith prowls the stage taking out his mic stand multiple times in the process while Andy stands dead centre, sweat running down his forehead in front of Isaac on drums who's ditched his shirt a couple of songs in. Luke on bass, essential to the sound, is cool and unruffled in comparison to his band mates. 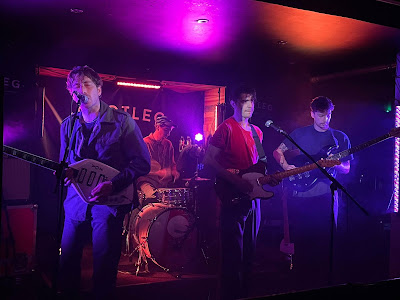 The audience respond to the performance, that energy is contagious and affecting, the songs delivered with a genuine hunger and passion, them losing themselves completely in their music, setting the adrenalin flowing and you could look forward and seeing huge rooms seething with it down the line. These songs deal with the trials and tribulations of modern day life, the monotony of the day to day grind and the impact it has on mental health as a means of escape and dealing with them. The older songs sound reinvigorated, the new ones true to the Egyptian Blueprint but developing it. It's a shame that both bands and the venue deserved a bigger crowd for one of our favourite shows since lockdown was lifted.
They played Never, Nylon Wire, Belgrade Shade, Four Is The Last Four, Skin, Collateral, To Be Felt, Salt and Contain It.