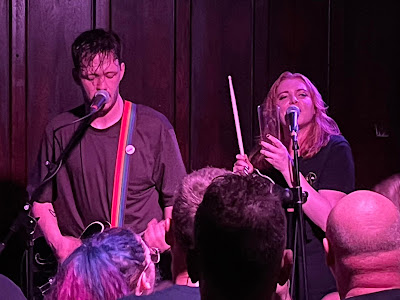 Sprints are the latest in the wave of Irish bands making their mark across the sea. Their first visit to Manchester sold out weeks in advance, no mean feat these days, and The Castle’s music room is packed right back to the door to witness a powerful forty-five minute set of loud songs that Sprints scrawl their effervescent personalities across.
In the PR for their forthcoming EP Modern Job Karla explains the songs are about “a critique of modern existence but also an exploration of growing up queer” and the opening unreleased track makes references to “should I cut my hair? should I wear a sweater?” challenging stereotypes. Sprints aren’t afraid to be confrontational; musically their songs feel constantly on the edge of careering out of control but never do thus taking the audience on a thrilling rollercoaster ride. There’s big guitar licks, Sam takes lead vocals in parts of a couple of songs, audience participation encouraged as Karla threatens to topple into the crowd off the monitors and we know full well if there were space she’d be in amongst us.
They play all four tracks off their Manifesto EP plus a series of unreleased songs that show that have the same relentless energy and passion. New songs like I’m In A Band, the second EP A Modern Job’s title track and new single How Does The Story Go sit comfortably alongside debut single The Cheek and Manifesto’s title track. 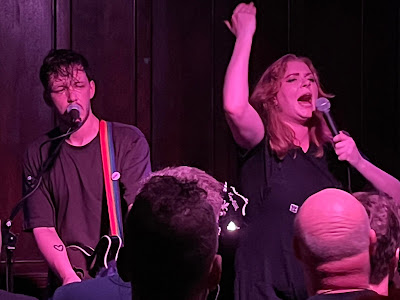 They lace their intersong chat with humour; during one brief pause for breath Karla quips “we’re having technical difficulties, I can’t play guitar” and there’s references to them being delighted to finally being in Manchester because they’re United fans, pointing City fans to the door. It’s all in good faith though; Sprints are all about inclusion and coming together and losing themselves in the music. They finish with a cover of Wet Leg’s Chaise Lounge, Karla grabbing an empty pint glass to replace the cow bell they’ve lost and they deliver a much heavier version of the song that straddles the middle ground between the two bands brilliantly.
They tell us their next show in Manchester in February in a bigger venue. As we book on the way out for February 24th in the basement of Yes, we know that space isn’t big enough for them now and they need to follow the like of their countryfolk Pillow Queens and New Dad to Gorilla.
Sprints' website can be found here and they are on Facebook and Twitter
They play Birmingham Sunflower Lounge (October 30), Blackpool Bootleg Social (31), Newcastle Head Of Steam (November 2), Sheffield Sidney And Matilda (3), Margate Elsewhere (5), Brighton Mutations Festival (6), Cardiff Festival Of Voice (7), Liverpool Shipping Forecast (9), Leeds Oporto (10), Dublin Grand Social (December 11), Limerick Kasbah (18), Cork Winthrop Avenue (January 21), Galway Roisin Dubh (22), Manchester Yes Basement (February 24), London Moth Club (March 2).
________________________________
Follow Even The Stars on Twitter at @eventhestarsuk and like our Facebook page for all the latest updates
Posted by Even The Stars at 09:44

Email ThisBlogThis!Share to TwitterShare to FacebookShare to Pinterest
Labels: Sprints