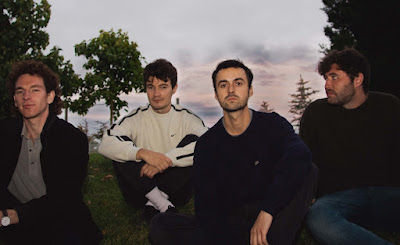 Dublin's Odd Morris today release their new single Silhouette, the second track to be revealed from their forthcoming Cityscape The Ballet EP, which delves into the subject of toxic masculinity, in particular the inability or unwillingness to share feelings and the consequences of not doing so.
The song deals with the way men, in particular, are afraid to express their feelings and how that can lead to more trouble in the long run as front man Daragh explains - "I had bottled things up, so I just let my subconscious do the talking, I think lads specifically could benefit from being more open with each other. This isn't a song about bashing masculinity, not at all, I see it almost as an invitation to be more open so we don't keep making the same mistake"
It asks the very pertinent question "but do you feel alright? because if you don't, just know that it's alright" before dissecting the fact that not accepting that can end in tragedy for the "men who've never open up about the shit in their head" if they try and fit the expectations of their grandparents in the modern world ("we're a different generation lads").
Silhouette is taken from Odd Morris's debut EP Cityscape The Ballet which is due for release on October 27 and features previous single The Once Was Enough as well as the title track, Rose Like Smoke and You Tried.
Odd Morris's website can be found here and they are on Facebook and Twitter.
They play Cardiff SWN Festival (October 16), Norwich Wild Paths Festival (17) before supporting John at Oxford Bullingdon (19), Brighton Patterns (20), Southampton The Loft (21), London The Moth Club (22) then playing festival slots at Newcastle Hit The North (23) and Amsterdam London Calling (29) before their own headline dates at Glasgow Hug And Pint (November 3), Manchester Gullivers (4) and London Sebright Arms (5) and concluding with Brighton Mutations Festival (6).
photo credit - Jack Martin from PR
________________________________