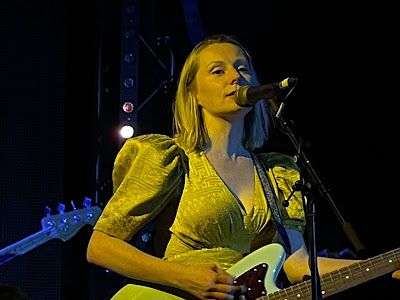 Lanterns On The Lake made their long-awaited return to Manchester for their biggest headline show in the city to date at their much-delayed Spook The Herd tour at Gorilla on Tuesday night playing their Mercury-nominated album in full.
We enter as Wyldest is finishing the last two songs of her set after heading over from another show at Yes. We'll cover her in more depth in future but we were so impressed on our first listen to her that we bought her album on the strength of less than ten minutes. If you're going to see Lanterns On The Lake on this tour, it'd be worth your while getting down early.
It’s been close to six years since Lanterns On The Lake last played Manchester. A lot has happened since then. The venue The Ruby Lounge has been lost to the capitalistic greed that’s threatening the heart and soul of our city whilst the band’s fortunes have turned for the better. Their extraordinary performance with Royal Northern Sinfonia was captured for posterity in early 2016 and they went out on the road with James in 2018. It was though the release of their fourth studio album Spook The Herd in January 2020 and its subsequent nomination for the Mercury Prize that raised the profile of a band that looked and talked like it might be over as the campaign for previous album Beings wound down.
Fortunately, for us and them, they didn’t throw in the towel and in Spook The Herd they produced their finest set of songs today, dialling back their tendency to throw everything at the songs for a more focused approach which strengthened rather than diluted the album whilst still retaining their experimental ambitions. It was the album they’d been threatening to make since they broke on to the scene with their homemade trio of cds at the start of the last decade. 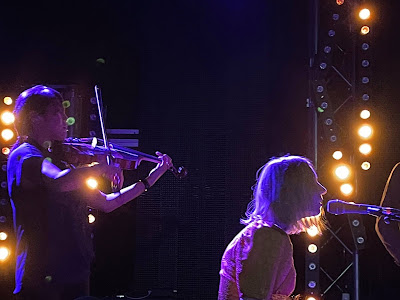 Understandably after not being able to play these songs live to an audience, they play Spook The Herd in full, making up nine of the twelve songs with the addition of a new track Locust and the title track and Through The Cellar Door from its predecessor Beings.
“It’s been too long, we weren’t going to cancel, no fucking way” Hazel Wilde tells us by means of explanation for the moments in her set where she’s struggling with her throat. Her band mates join in with the ending to Beings to support her but whilst you can see her discomfort at points it does little to impact the way these songs hit us.
The emotional clarity of the likes of Before They Excavate, Secrets And Medicine, Every Atom, This Is Not A Drill and A Fitting End feels even more stark on the sparsely lit stage with an attentive audience who stand and listen intently. The songs take on additional depth and meaning, the sounds Paul Gregory extracts from his guitar and pedal board, aided by a violin bow on Beings, feel outerwordly at points and visually you could be drawn to him all night. Angela Chan’s violin pierces the reverential silence, one minute soaring, the next adding depth while Bob Allan and Oli Ketteringham’s rhythm section provide the framework essential for this magic to happen. 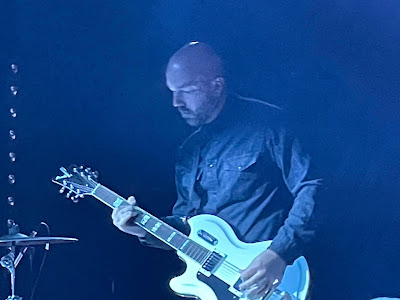 There’s space for a new song Locust which, on first listen, takes the modus operandi of Spook The Herd and stretches rather than reinvents it and it’s a relief to hear that they’re still creating after being cut off for eighteen months just as they were about to get the acclaim and rewards their talent demands.
Lanterns On The Lake might just be a little too difficult for mainstream tastes, refusing steadfastly to settle and be categorised, one minute a quiet almost-not-there skeletal folk sound, the next heading off into full on rock band territory, often in the same song, never standing, or, as Hazel feels like she moves from seated at keyboard to standing on guitar at the end of every song, sitting still. Yet it's exactly that which makes them so special, a band to fall hook, line and sinker for, to invest time and emotion into and reap the rewards of the beauty that they create both at home and here where you can see the whites of their eyes.
Lanterns On The Lake played When It All Comes True, Blue Screen Beams, Every Atom, Swimming Lessons, Before They Excavate, Through The Cellar Door, Secrets And Medicine, Baddies, Locust, This Is Not A Drill, Beings and A Fitting End.