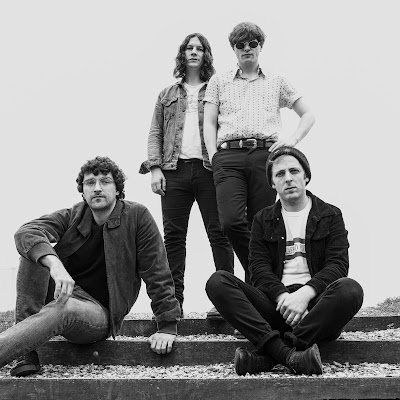 Neon Waltz head to Manchester tonight as part of their first tour since 2019 showcasing songs from their second album that they've just completed as well as reminding us of the brilliance of their debut Strange Hymns. We caught up with them in the van as they hit the road.

Your tour is finally happening at the third attempt. How does it feel to be actually in the same room as your audience again?

I might sound daft but after two years apart it maybe felt like we'd have lost something we had together, us and the fans. One song in on Friday in Edinburgh and that notion was completely wiped out. It was insane to experience that weird but wonderful bond once again. We'd definitely forgotten how that felt.

Were there times during lockdown that you thought about jacking in the band and what kept you going?

I don't think that was really something any of us experienced, not anymore that we normally do. It's fucking hard doing this and that feeling rears it's head every other day, lockdown or not. I don't know if it's that this is some how inbuilt, a bit like breathing or some other cliches or just that the good times always seem to triumph the struggles but we keep going. I think we all enjoyed the break maybe, we've all got a spring in our step again.

You’ve completed your second album. When can we expect it to be released?

Spring-ish next year we hope. It's being mixed right now and there's a process that follows that takes time but we'll start putting singles out as soon as possible.

How and where did you record it?

The bulk was recorded in eight days in a castle two miles from home. It was something we always knew we'd do at some point and the way the record was coming together it became pretty clear now was the right time.

We'd already had Tarek onboard and a few studio suggestions floated about, some fell through & others just didn't suit. So we just built a little studio in Freswick Castle and got on with it.

After the experience of Strange Hymns when you had seven producers across multiple sessions does the next record feel more like a cohesive body of work?

Yes, for sure. We were able to sit down with Tarek and discuss themes that could link the songs together, something that never happened on the first album.

Has the sound of the new album changed from the Neon Waltz we know from Strange Hymns?

Yea, absolutely. But just enough. The progression seems manageable but it's hard for us to say. There's more space in some places, it's harder hitting in others. It has all the same dynamics but the songs remain king, it's always about the song first then the sound.

What are your plans after this tour?

I think we should arrive home to mixes of the record, so we'll deal with that immediately, get it finalised and then mastered. Then start working towards its release.

December and Christmas is by far my favourite time to write songs and because we're on tour now we'll have it off this year. So we'll make the most of that.