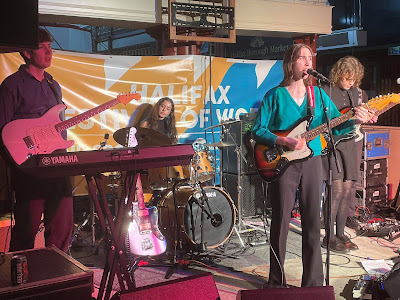 Julia Bardo finished off her UK tour supporting her debut album Bauhaus L'Appartamento in the slightly surreal surroundings of the Albany Arcade in Halifax's Borough Market performing the album in full and her own interpretation of a Pixies' classic. The impressive support came from last minute replacements Pale Blue Eyes and a new local band Stonebow.
One of the delights of festivals outside big cities is the discovery of new bands from the town that might not have yet reached the radar yet and Stonebow are very much an example of this. Accomplished musicians, the guitar solos in particular are impressive and inventive, with a vocalist who has a presence that's strong now but which you could see flourishing on bigger stages, they've already got a very solid set of songs for their opening half hour set that goes down well with an admittedly partisan audience.  You're Down, Like Me and Changing particularly stand out. There's nothing on line at present but they tell us that they've recently recorded a four-track demo that should be out soon. It's telling that their cover of Crazy Little Thing Called Love feels a little superfluous given the standard of their own material, but that's a minor quibble from a band we expect to hear a lot more of. 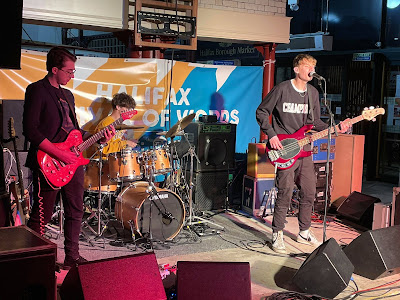 Pale Blue Eyes hail from Devon and jumped on this show at the last minute after the original support pulled out because of you-know-what and it's a convenient diversion of their journey to Derby where they're opening on the Sea Power tour. Sea Power fans will find a lot to love here, their songs possess a wonderful propulsive energy that drives them along with vocals that sit on top dipping below and then rising above the surface creating a really dreamy effect that's unassuming yet draws you right into its softly spinning whirlpool. Their debut single Motionless kicks off the set and is a good barometer of what's to follow as they run through a set of six songs that have a real continuity of flow and sense of purpose to them, particularly their final seven minute song that feels like the most wonderful hazy soundtrack to a day of doing nothing. 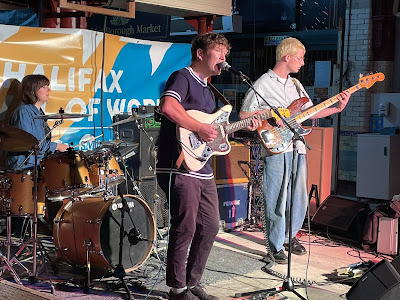 Julia Bardo's debut album Bauhaus L'Appartamento is one of the albums of 2021 in our book and she's been out on the road with her band for the last few weeks culminating in tonight's show. She's gathered together a five-piece band that understand the depth of emotions that run through the ten songs and who have faithfully recreated the wistful majesty of them with a slightly, but not much, harder edge than on the record.
This allows Julia's rich delicate yet charged vocal to take centre stage as she imparts these stories of loneliness, insecurity and homesickness to an attentive audience that gives these songs the respect they deserve. Starting with the album's opener The Most and finishing on its closer Goodbye Tomorrow, the songs are reordered for the live set without compromising the flow that makes the album such a pleasurable listen. It's Okay (To Not Be Okay) feels more reassuring when you can see the person dispensing the advice in front of you and is a message that more people need to hear. Julia doesn't talk about the songs before playing them, but that merely heightens the impact of them. 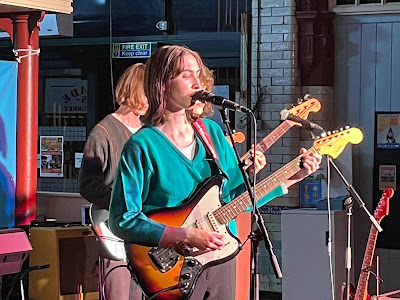 They cover Pixies' Gigantic, dedicated to a man called Paul in the audience, and rather than try the impossible and replicate the original, they translate it into a Julia Bardo song, even removing the forced pronunciation of the title. It might infuriate the purists, but it's a thing of genuine beauty very much in keeping with what's going on around it. Love Out Of Control and Impossible, shorn of its Italian spoken word section, are particularly gorgeous, imbued with a warmth and clarity of thought that belies the confusion behind the lyrics.
While Bauhaus L'Appartamento might not on first glance appear to be a record suited to translation to the live environment, in this market place with the hoarding extolling the virtues of the finest cooked ham in the land in the background, the old saying that first impressions can be deceptive is very much proved to be true.  The audience's heartstrings are well and truly tugged to their limits by these intensely personal songs whose existence feels like a catharsis for both performer and those fortunate enough to witness it.