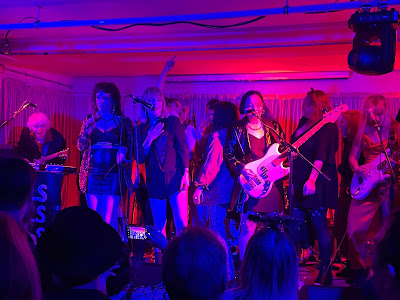 Tonight's show is billed as an album launch for PINS' third album Hot Slick, released in May last year, and after a year's delay we finally get to see them play tracks from the album live at the end of a short UK tour.
Bulked up to a six-piece tonight with tour stand-in Erin from Loose Articles and the returning Lois both playing guitar, they turn an initially reticent Pink Room crowd into a dancefloor throng by the end complete with a stage invasion of women from the audience in a celebration during their final song Girls Like Us, the only track to survive in the set from their debut album of the same name.
That very much feels like a statement that PINS are a very different band these days. For one they look like they're having a world of fun and encourage their audience to do the same. Twice Faith and Kyoko come out into the crowd; the second time Lois and the backing vocalist (who doesn't get introduced) join them leaving just Erin and drummer Abbi on stage although by the end of the night, there's another twenty of them up there as they combine the fun with a serious statement that gig venues need to be a safe space for women. They move around the stage; looking each other dead in the eye and smiling and laughing and it's an infectious behaviour that transmits itself to the audience in a way previous incarnations of PINS probably haven't been able to achieve. 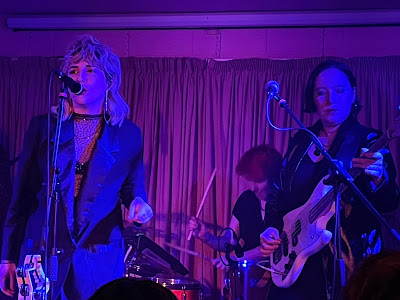 They're tighter and stronger than they've ever sounded before as well, the multiple backing vocalists in particular giving the songs a lift at exactly the right moments, Kyoko in particular. Their songwriting has evolved too; the newer songs seem simpler than the older ones. Like so many great songs, they make heavy use of repetition (Serve The Rich and Ponytail being prime examples), yet in doing so, they grab the attention immediately, even if you're not familiar with them, and you feel like they're old favourites by the time they reach the final chorus. The opening five tracks - the title track from Hot Slick, two further songs Bad Girls Forever and Ponytail, plus two singles Bad Thing and Serve The Rich that preceded it - feels like a mini Greatest hits collection and the audience roar their approval at the end of each one as if they were.
While they might not be getting the critical acclaim they received earlier in their career, PINS have evolved over the past eight years, changed line-ups and their sound and as we leave 2021 they appear to have rekindled their love of playing live, playing together and connecting with an audience that crosses genders and age groups. They deserve bigger rooms than this but they're comforting themselves by making this fun for them as much as us.
PINS official website can be found here.  They are on Facebook and Twitter.
They played Hot Slick, Bad Thing, Bad Girls Forever, Ponytail, Serve The Rich, Young Girls, All Hail, After Hours, Ghosting, Bad Habit and Girls Like Us
________________________________
Follow Even The Stars on Twitter at @eventhestarsuk and like our Facebook page for all the latest updates
Posted by Even The Stars at 13:46