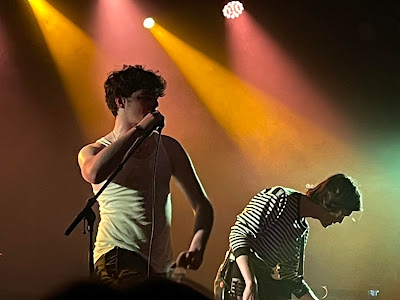 Working Men's Club played their biggest headline show to date at a sold-out Manchester Ritz on Friday night. An eleven-song set ended with Syd riding on a sea of arms in the audience as they charged through a fifty-minute non-stop exploration of the boundaries where rock and electronic music merge into one intoxicating cocktail.
As Working Men's Club make their entrance to the sound of Abba's Fernando, fashionably late, there's a real buzz of expectation in the room. The crowd is full of excited teenagers experiencing the closest they'll get to the thrill that the older members of the audience experienced in the heady days of this city's musical heyday of the late eighties and which you sense they see elements of in Working Men's Club, even though they themselves might baulk at that comparison.
What Working Men's Club are doing, with Syd at the helm, is creating a fusion and melting pot that pulls together diverse musical strands and knots them together into something that is far greater than the sum of its component parts like the very best mixtapes do. There's eleven songs in the set but they feel like one long continuum without pause for breath, just seconds to reset at the end of one onslaught before the next one hits you, your feet unable to stop moving from the time they take the stage to the minute they depart. 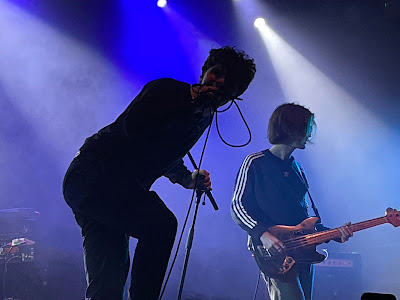 The rules of a traditional gig are broken - their recent single X is nowhere to be seen, their debut single Bad Blood which started this whole thing off has been long since consigned to the bottom of the Spotify discography. The setlist is about what fits together and keeps the energy flowing. Unreleased tracks like Widow and Money Is Mine sit alongside established tracks like Cook A Coffee, Valleys and Teeth as if they've always been that way.
There's no words from artist to audience but the connection is made through movement, Syd is animated throughout, pulling shapes and faces as if he's one of us rather than the performer whilst his band mates look on in their own space and time. This allows Syd to be the focus of the audience's attention, once they open their eyes and look stage-ward, lost in his own world one moment, spitting the vitriol of Cook A Coffee the next and ending the show surfing on a sea of hands as Teeth brings the set to a close. 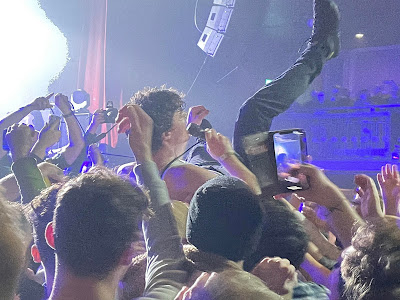 There's always a question mark where a band forged in small tight-knit clubs and venues make it to bigger stages, whether they can handle the heightened expectations of playing to crowds of four figures rather than a few dozen, whether they can fill a room with their sound or they shrink and feel small. Working Men's Club unequivocally answer that tonight and pose the question of just how big they can go.
Working Men's Club played 19, Valleys, Cook A Coffee, Widow, AAAA, John Cooper Clarke, Money Is Mine, Be My Guest, Rapture, Angel and Teeth.