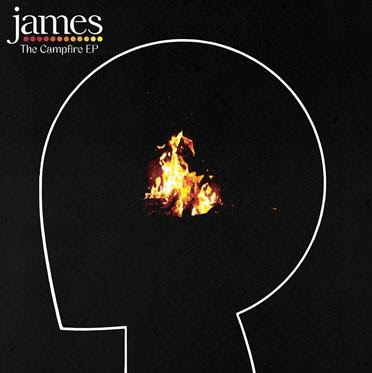 Back in June James released their sixteenth studio album All The Colours Of You. Prior to that the band reconvened for the first time in eighteen months at Broughton Hall in Skipton to rehearse and record radio sessions. From that retreat comes a four-track EP that strips down three tracks from All The Colours Of You and an old favourite Just Like Fred Astaire to show a very different side to a band about to embark on an arena tour.

Miss America opens up the EP. Recorded in the stately home’s library rather than the campfire of the EP’s title, it’s a compelling takedown of the toxic culture around the former US president Donald Trump set to the theme of the Miss America beauty pageant that he used to present. The cello plays a key part in the song, the long lingering opening creates a powerful tension that’s juxtaposed by the guitars and keys as the song progresses. With Chloe Alper’s providing both lift and harmonies to Tim Booth’s lead there’s a real contradiction between the warmth of the vocals and the biting nature of the lyrics, an oft-overlooked facet of James’ work over the years. It’s a superior version of possibly the weakest track on All The Colours Of You.

Recover follows, recorded round the campfire, and really needs the video that’s available as a download to purchasers of the EP via the band’s store or at their merch desk on the tour to fully appreciate.  Opening with a longing melodica from Mark Hunter, violin from Saul Davies and some more haunting harmonies from Chloe as the band sit around a campfire in the hall’s grounds, the song is the story of the loss of Tim’s father in law to COVID in the early days of the pandemic and it’s evident that the scars and the sense of loss are still exceptionally raw and painful in his delivery.

Magic Bus has undergone the most radical transformation of the four tracks here. The big electronic stylings of the album version are replaced by a soft pounding drum beat and more subtle atmospherics, starting with a solo whistlling Andy Diagram as its intro. The tight rhythmic drums give it a tight claustrophobic feel, punctuated by shards of  trumpet before the song erupts into a wall of vocals from round the fire then stopping dead. It’s a creative reinvention of one of the album’s most upbeat moments into something that retains its power, a trick James have mastered for radio sessions for the best part of three decades.

The EP is completed by Just Like Fred Astaire from the 1999 Millionaires album. The song’s been performed in this stripped down way on recent tours and it allows for the romanticism that’s right at the core of the song to take centre stage rather than be embedded in the slightly overbearing production of the released version. Violin and cello feel like they’re leading the dance like the first one at a wedding, full of the unapologetic love of which Tim sings.

The Campfire EP is a success on many levels, it feeds the James’ fanbase’s love of them taking songs and twisting, turning and breathing new life into them by adjusting the perspective on them. For the All The Colours Of You tracks it’s a companion piece to the album that we’d love to see them explore for future records whilst the inclusion of Just Like Fred Astaire in this form is a welcome alternative take.

The EP is available to preorder from the band's store and will be available on the merch desk at their forthcoming shows.