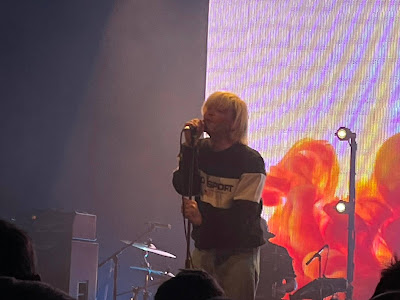 Saturday night saw The Charlatans' month-long tour in support of their career-spanning boxset head to the O2 Academy in Birmingham for a sold-out show that took the crowd on a nostalgic journey through some of their biggest hits, but also reminded us with some of their more recent material that they're an active thriving band even after all their trials, tribulations and tragedies over the years. Support came from Martin Carr & What Future.
Martin Carr & What Future are stripped down to a trio tonight due to their bass player Gaz having tested positive for COVID, but if he hadn't have told us, we wouldn't have realised that the former Boo Radleys songwriter and guitarist's half-hour set was a man down. Highlights of his set are Mainstream and The Santa Fe Skyway, but as you'd expect given his long history of songwriting, the craftsmanship on display is detailed and focused across the whole of his set. 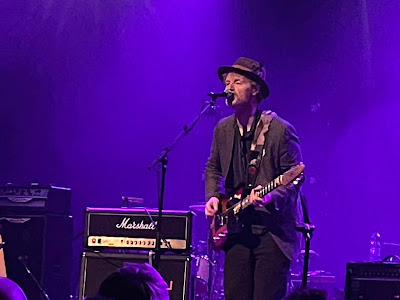 There's a real feeling of warmth emanating from the stage. He references his family sat up on the balcony and whilst not all the audience afford him the respect his reputation and the quality of his songwriting craft should afford him, he leaves a really positive impression with the honesty and openness of his art.
The Charlatans' set is a celebration of a band's survival into their fourth decade, still intact even though they've tragically lost a couple of members on their route - Rob Collins to a car crash and Jon Brookes to a brain tumour. These are events that would have finished a lesser band, but they've regrouped and continued but have never forgotten them - a touching dedication of The Only One I Know to them is the visible sign but their spirit very much lives on in the way the older songs sound. Whilst it's Tim Burgess up front orchestrating and encouraging the crowd to join in, they are very much still a collective and the Charlatans audience very much appreciates that fact.
With thirteen studio albums under the belt and twenty-two top forty singles from the days when indie bands had hit singles, they've got an impressive body of work from which to select tonight's set. It's testament to this that they play a set of this length and there's still crowd favourites - singles Indian Rope, Over Rising, Crashin' In, Just Lookin', Love Is The Key and Jesus Hairdo as well as a raft of classic album tracks - that don't make the cut. 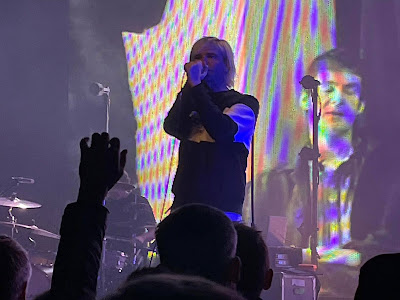 The songs that do though demonstrate a band operating across the best part of thirty years. The Only One I Know and Then, from their debut Some Friendly, possess the same basic strands of DNA as the more recent Different Days and Plastic Machinery that take their place mid-set. Sproston Green finishes the set as it has at pretty much every show since it was first played - and whilst it's predictable, it would feel wrong for the night to conclude any other way.
There's a heavy focus on their second wave - Tellin' Stories in particular contributing significantly to the setlist and the most raucous of the audience response mainly the closing duo of the main set - North Country Boy and How High - although the older bodies of the audience means we don't get a repeat of the ecstatic scenes from their early years playing out on the backdrop. Almost every album is represented alongside the rarity Sleepy Little Sunshine Boy that was rescued for the A Head Full Of Ideas boxset that they've just released.
The backdrop is an impressive mix of early footage of the band at The Ritz, Blackpool Empress Ballroom and other venues, memorabilia and photos from across the years and unseen snippets of footage and adds to the celebratory feel of this retrospective where the audience are revisiting the songs they grew up with and which helped forge their musical identities.
Tim Burgess is very much their ringleader, conducting the audience at times and turning round the usual front man aversion to people filming the gigs by grabbing his phone and taking photos and videos at different points in the night. He tries to include everyone in the show too, pointing at people on the balconies, spotting fans in the crowd and acknowledging them and ensuring that the audience feel part of this without playing the big showman role because he understands the band are equally important in what The Charlatans are even if they let their instruments do all their talking for them. In moments you sense he's living out his dream and can't quite believe his luck at doing this at all and still being able to do it so many years on and that infectious energy very much transmits itself to the crowd who are here to celebrate him and his band's survival for so long.
The Charlatans played Forever, Weirdo, Can't Get Out Of Bed, Then, So Oh, You're So Pretty We're So Pretty, Sleepy Little Sunshine Boy, Just When You're Thinkin' Things Over, One To Another, Different Days, Plastic Machinery, I Never Want An Easy Life (If Me and He Were Ever To Get There), A Man Needs To Be Told, The Blind Stagger, The Only One I Know, North Country Boy, How High, Blackened Blue Eyes, Trouble Understanding and Sproston Green.

Email ThisBlogThis!Share to TwitterShare to FacebookShare to Pinterest
Labels: Martin Carr & What Future, The Charlatans