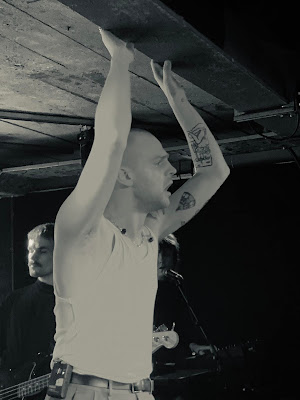 VLURE completed their first UK tour with a show at Headrow House in Leeds. We diverted our travel plans as part of our mission to see them as much as we can at this important phase in their development as a band and were rewarded by another intense and unique performance from a band that excited us from the first note we heard from them and the love for who continues to grow.
Stourbridge's The Novus are given the thankless task of opening the evening to a dozen of us and to their eternal credit, they play as if they're in the Academy a few hundred metres across town. Fronted by Connor, an indefatigable front man who strikes poses, rushes round the open space of the venue, rolls around on the floor and still delivers an emphatic enigmatic performance for half an hour, they're a cross between a punk and a traditional heads-down rock and roll band and a very self-confident and aware one at that, capturing first the attention and then the admiration of the small but willing crowd. 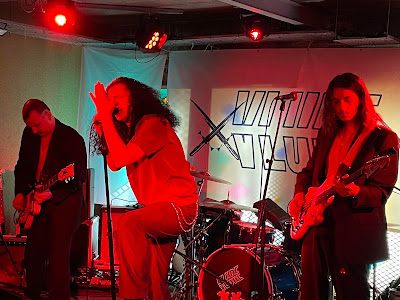 Refrain and The Mantra are highlights of a set that's consistent in its quality over the half-hour they play, showing that The Novus have a very clear view of who they are and what they're about - and at the centre of it is an unshakeable belief that they love what they're doing and people need to pay attention to it even in such small numbers and that's the abiding memory we'd have of their set. Loud, powerful and direct without losing the ability to create a song that has a hook to draw you in they're an impressive opening act.
There's no more than three dozen people here to witness the final night of VLURE's first UK tour. The numbers don't matter to anyone except the promoter. There are bands who are bigger than VLURE are likely to become who've played their first tours to crowds smaller than this every night. The first tour is about deepening the bond of friendship that exists between the band, learning to live in each others pockets for a couple of weeks and going to places where they have few friends who will tell them everything is wonderful and they have to work for the response they get. They finish the tour with more disciples than when they started, and disciples is the right word to use here. Watching VLURE is like a religious experience, but without the false prophets and promises. One look at Hamish mid-song and you know this is about the full life, body and soul experiences he's gone through and this is his release, to coin a line from their recent single Heartbeat. 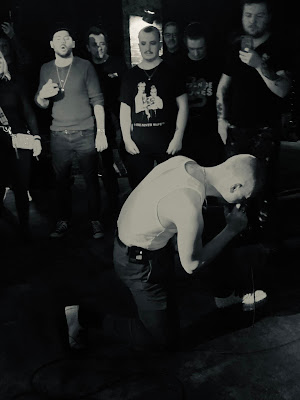 He spends the gig on the floor, off-stage, amongst us after bidding us to move closer after the opening Desire where he prowls between us. One minute he's lost in the music, the next eyeballing the nearest person as he screams words of escape and of salvation, exposing his vulnerability for all to see. These songs are a powerful catharsis, the emotions of feeling lost and alone in the world, riddled with doubts, living for the weekend to escape the drudgery of work, are all ones that anyone can relate to whether from the streets of Leeds, or Glasgow, or anywhere that they will be setting forth their agenda in 2022.
It'd be easy to focus just on Hamish, but behind every great front man (or woman) there's a great band. The phenomenally powerful platform that Conor, Niall, Alex and Carlo build is as fundamental to the impact of these songs. Their music is a powerful potion that crosses genres, generations and movements with a magical formula that feels fresh and invigorating - you could lose yourself in dancing to it on its own without the words and performance of the front man. 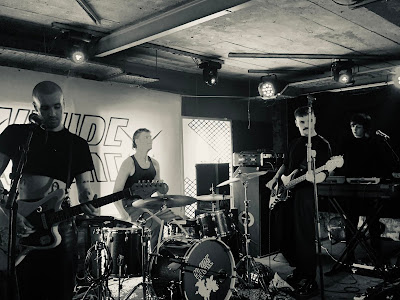 Their debut EP drops in January and all five tracks from it form the basis of tonight's set - the previously released Show Me How To Live Again, Heartbeat and I Won't Run (From Love) are accompanied by the magnificent wrecked The Storm where Hamish asks the simple question "what's life but a storm, where's the sense, what's the norm" over and over again searching for answers and the set-closing Euphoria, preceded by a poem read by their tour manager.  With previous singles Desire and Shattered Faith and their punk / disco / glam mash-up cover of Faithless' God Is A DJ completing the set, they're only on stage for less than forty minutes, keeping their powder dry for what comes next.
It's an absolute privilege to watch a band at this phase of their development in the absolute certainty that there's going to become a very big deal indeed in the not too distant future, to share moments where you almost feel like you're part of the band such is the intensity, the proximity and the connections that are made and that can never be repeated once they reach a certain level. VLURE are the most important new band in the country right now and we'll never tire of telling you that.
VLURE played Desire, Heartbeat, I Won't Run (From Love). The Storm, Show Me How To Live Again, Shattered Faith, God Is A DJ and Euphoria.

Email ThisBlogThis!Share to TwitterShare to FacebookShare to Pinterest
Labels: The Novus, VLURE