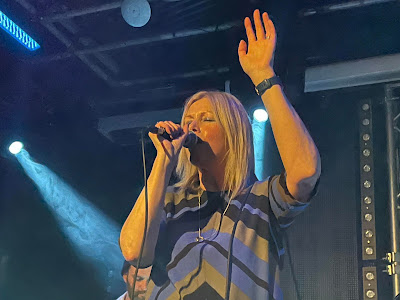 Jane Weaver brought her Flock tour to Manchester Gorilla for a sort-of-homecoming show on Saturday night. Mixing tracks from Flock with highlights from her growing back catalogue, she delighted a crowd that allowed itself to get lost for an hour and a quarter in intoxicating songs that seduce rather than overpower.
As Jane and her band - Paul on guitar, Raz on synths, Matt on bass and Andrew on drums - take to the stage, there's problems as Paul's guitar doesn't seem to be working, which Jane tells us in a mix of English and broken French and German that has the audience laughing. It's practically impossible not to like Jane Weaver - she has that air of a slight nervousness still at being on stage even after many years, an awkwardness that betrays that it isn't her natural environment that makes everyone warm to her even more. Especially when she starts to sing and the warm vibes that exude from every note of these tracks wash over a crowd that's impeccably polite, you have the sense that there's a genuine connection being made without the need for bravado or rash experimentation. And it's a beautiful place to be. 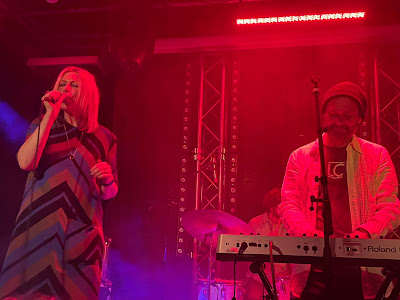 Whether it be the songs from Flock - and eight of the ten tracks from it make up two-thirds of tonight's set - or the reaches into the back catalogue for Modern Kosmology's title track and I Wish, The Silver Globe's Mission Desire and I Need A Connection - there's a sense of flow to the set that makes it feel like Jane and the band are taking us on a journey with them. They don't seek to overpower us by turning everything up; everything is set at a level where Jane's airy and expressive vocals are allowed to surf atop the fluid rhythm and melodies of these songs, dipping below and rising above them at just the right moments to draw you in. As she leaves us with I Need A Connection and we head out into the cold Manchester night, we do so with a warm glow.
Jane Weaver's official website can be found here and she is on Facebook and Twitter.
________________________________
Follow Even The Stars on Twitter at @eventhestarsuk and like our Facebook page for all the latest updates
Posted by Even The Stars at 09:57