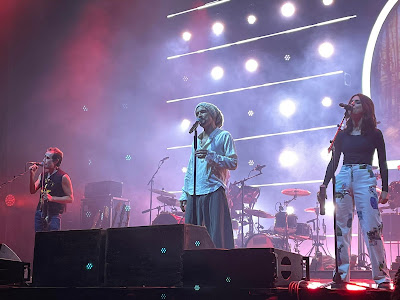 James opened their UK and Ireland arena tour at Leeds First Direct Arena on Thursday night supported by Happy Mondays. Mixing classic crowd-pleasing singles with deeper cuts from across their career and a fair smattering of songs from this year's All The Colours Of You album, the newly-expanded nine-piece demonstrated that they're still a creative force to be reckoned with.
At one time Happy Mondays would be filling venues like this on their own back. That they still exist is an achievement in itself and they have come to the conclusion that they have a catalogue of songs that will evoke memories of a certain time and place for people of our and their age. The likes of Wrote For Luck, Hallelujah, 24 Hour Party People and Step On were songs that defined a very specific period at the end of the eighties and into the nineties (nineteen of course) and still hold a special resonance for many given the response those songs get. 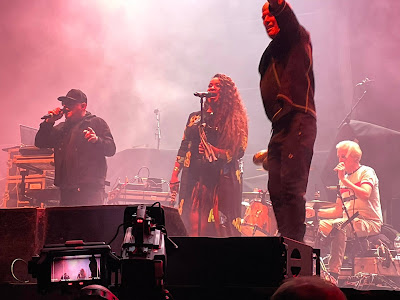 Shaun's problems have been well documented and it's very much Rowetta and Bez who are the stars of the show these days. Rowetta has always possessed a phenomenal voice and she almost takes on a lead role whilst prowling the stage in her own unique provocative manner whilst Bez leads the dance, whilst pushing both Mark and Paul to the front at times to be acknowledged by the crowd. There's no surprises in the set list, but then that's not what Happy Mondays are about. 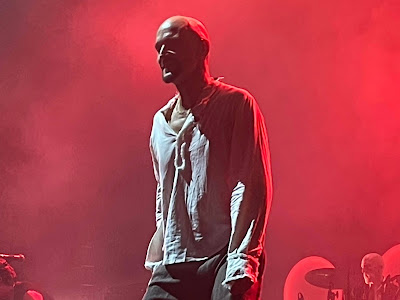 Time has been kinder to the headliners and much of that has to be down to their desire to constantly reinvent themselves and not being afraid to expose their fans to a significant chunk of new material alongside old favourites. This means that there's a slew of songs from their reformation onwards in 2007 that now class alongside the bigger hits of the last century in the minds of enough of this crowd for them to feel like big singles. They're still writing them too - three of the songs from All The Colours Of You; the title track, Isabella and Beautiful Beaches are big singles born at the wrong time.
The addition of Chloe and Debby has added much to a band that has always been greater than the sum of their individual parts. The on-stage relationship between Tim and Chloe, particularly when their vocals combine, is at the heart of this iteration of James, even on older songs like She's A Star, Curse Curse and Attention, whilst Debby adds a really infectious energy whether it be on the drums during the likes of Hymn From A Village and Gold Mother. 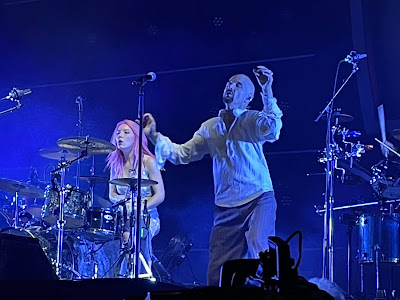 There's small observations that tell us just how much this version of the band has gelled and love playing together - Jim crouches with a smile on his face watching Dave and Debby go hammer and tongs at the end, Tim standing awe-struck as Saul and Jim create an intense improvisation during the second part of Sound and Debby leaning on Adrian's shoulder as she comes out to dance around the stage on Come Home.
It's reflected in a setlist too that jumps around the back catalogue without ever feeling disjointed, the old sits perfectly alongside the newer. Isabella and She's A Star don't feel like songs written twenty-four years apart and neither do All The Colours Of You and Gold Mother which have over three decades between them. The reason is the way James infuse their older songs with the vibrancy of the new and perform them as if they've just been written. Even the really big hitters Sit Down and Laid at the end of the set benefit from having been rested at points in the past few years and come back refreshed with the band playing them through a love of them rather than a sense of duty to meet an audience expectation. 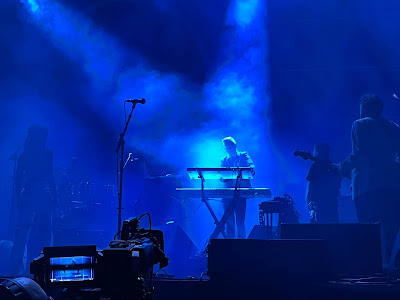 What they've lost due to Tim's inability to come down and connect physically with the audience is tempered by the on-stage energy and a powerful lighting set up. All The Colours Of You is accompanied by a series of lit discs that change colour in sequence with the album artwork then turn white and are uplit then in the same colours. Gold Mother, resurrected after a decade, has a series of gold lights that really add to the effect of the song especially where Jim leads on the bass. They're just a couple of examples from a set where the lights augment but never steal the show and the arena sound is also very complementary to what James are trying to achieve as a nine-piece, the First Direct proving its reputation as one of the best in the country.
They leave us with an encore that starts with Wherever It Takes Us, which is feels they capture right for probably the first time and the duo of Sit Down and Laid that has the floor bouncing and the seats up and standing. Tim stops Laid at first as he spots some trouble down in the audience and they don't start until they know it's been resolved. Once it has Laid sends everyone out of the room buzzing - leaving us with the same question Tim has at the start of the encore - "what else is there left to say?"
James played Zero, Isabella, She's A Star, Born Of Frustration, Five-O, All The Colours Of You, Gold Mother, Come Home, Curse Curse, Miss America, Attention, Hymn From A Village, Beautiful Beaches, Getting Away With It (All Messed Up), Sound, Wherever It Takes Us, Sit Down and Laid.