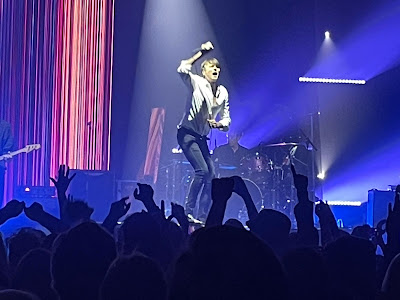 Suede rolled into Manchester for the penultimate night of their long-delayed anniversary tour for their 1996 album Coming Up performing the album in full in the first half of their set with a mix of singles and more recent tracks in the second half. Support came from Nadine Shah.

Nadine Shah's forty-minute support slot is an impressive one with a huge seven-piece band bringing to life tracks from last year's Kitchen Sink album as well as her Mercury Prize nominated Holiday Destination. The songs have a real groove to them live and the highlights are where Nadine delivers their confrontational (to some) message - whether it be the "how are you going to sleep tonight?" of Holiday Destination's title track aimed at those that decry immigration or the challenging of gender stereotypes and roles on Ladies For Babies (And Goats For Love) and Trad from Kitchen Sink. 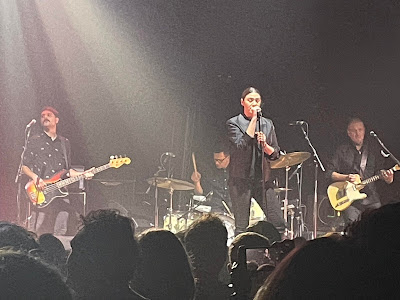 She's exuberant in her praise for the Suede fanbase who seem to have taken her to their heart and give her a really positive response to the set which gets stronger as the set progresses and the building fills up. She finishes her set with a wonderful rendition of Out The Way, the track she performed at the Mercury ceremony and leaves with the applause of the crowd ringing in her ears, but it won't be the last we will see of her tonight.

We're not usually fans of these classic album gigs but there's certain exceptions we'd make and Suede's Coming Up is one on its twenty-fifth anniversary. We might have not listened to the album in full for many years, but the experiences half a life back don't go away and we remember every single word to each of the ten songs from Coming Up, the album that made us Suede fans as we'd been indifferent to the hype surrounding the first two albums at the time. Packed to the very edges with singles that four thousand people sing in unison, saving Brett from the highest notes, the first half of the set is the album in full with imagery and videos across the screen behind them taking us back in time.

There's nothing much that can be said about Coming Up that hasn't been said in the past quarter of a century since it made its mark as one of the defining albums of the Britpop era. Half of the album was released as singles - Trash, Beautiful Ones, Saturday Night, Filmstar and Lazy - and naturally these songs elicit the most enthusiastic of responses of the ten songs that make up the first half of the show. They still sound as fresh and vibrant as they did back then - anthems for the outsiders that don't fit in and whilst the audience has grown and matured they provide a reminder of how music can still strike a chord and evoke memories and feelings like nothing else can.

Brett roams the stage like a man possessed; still throwing everything into these songs like they were written yesterday and are being performed for the first time. Whether he's up on the monitors arms raised demanding a connection from the audience or in more reflective mood on Coming Up's quieter moments like Starcrazy and Picnic By The Motorway, he's very much the focus of the audience's attention. The band though deserve the ultimate credit for ensuring these songs, twenty-five years on, still have the energy and passion they did back then. 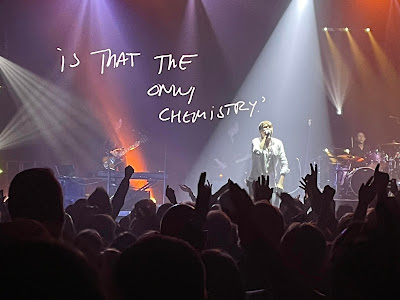 The second half of the set is a mix of new and old, starting with the trio of Coming Up-era b-side Young Men and post-reformation Night Thoughts' No Tomorrow and Bloodsports' It Starts And Ends With You. There's a touching moment in the middle of the second half where Brett introduces Nadine Shah with gushing praise for her song Fool, telling us that he wishes he'd written the song before they perform it as a one-off duet that feels like a genuine moment of mutual appreciation. They finish the main set with a mini Greatest Hits section featuring Can't Get Enough, We Are The Pigs, So Young, Metal Mickey and Animal Nitrate which are greeted with the same roar as the Coming Up songs.

Those two newer songs demonstrate the problem with a band of Suede's history - the songs stand up against what they'd done prior but the audience haven't always moved with the band apart from the hardcore fanbase who you can identify in these moments. The band though, rightly, are not resting solely on their past despite the nature of this tour. Their encore is pointedly the most recent song in the set - Life Is Golden from The Blue Hour album, an anthemic arms-in-the-air moment that captures the anxiety of parenthood - written about Brett's son now he's not a "crappy indie goth." 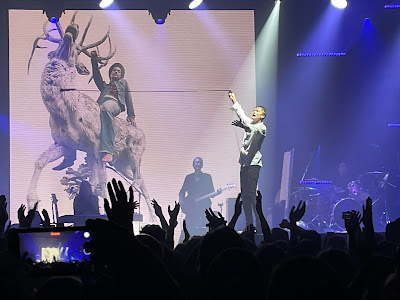 "It's like being at a football match, I'm not saying where" Brett says half way through the Coming Up set, although there's none of the crushing disappointment as we depart recently felt by visitors to Old Trafford, under whose shadow the patently unlovable Victoria Warehouse sits. Suede do pull off the difficult task though of transcending a sterile freezing cold box of a building and creating a sense of joy and celebration of better times past whilst giving us a little nudge that they're still an active band releasing new music they believe stands up to their golden past.

Suede played Trash, Filmstar, Lazy, By The Sea, She, Beautiful Ones, Starcrazy, Picnic By The Motorway, The Chemistry Between Us, Saturday Night, Young Men, No Tomorrow, It Starts And Ends With You, Fool, Can't Get Enough, We Are The Pigs, So Young, Metal Mickey, Animal Nitrate and Life Is Golden.