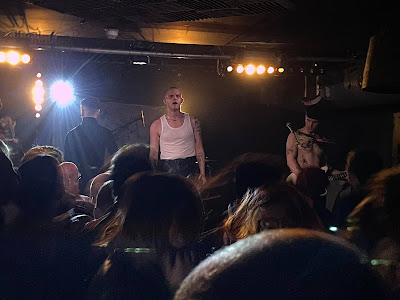 VLURE opened their UK tour on Saturday night at The Mash House in Edinburgh with a forty-minute genre-bending set of huge outsider anthems that set aching stories of loneliness, paranoia and mental health challenges to stomping dance beats that had the speakers on the verge of toppling and the floor creaking as the whole room lost themselves in an ecstatic experience.
Shredd opened up the show. The Glasgow three-piece make a huge noise when they let loose, but what impressed most of them was the control they exerted over their set, knowing just when to take songs down and build them back and when to just let loose and threaten the hearing of anyone who might stand in their path. It's only their third gig back, but there's very little sign of rustiness as they take an initially reticent crowd and by the end have them roaring in appreciation. They don't say much at all, but they don't need to. We knew nothing about them going into the room, we bought a CD on the way out even though they were insistent it was an old one. They need to get a new one out there because they were serious impressive. 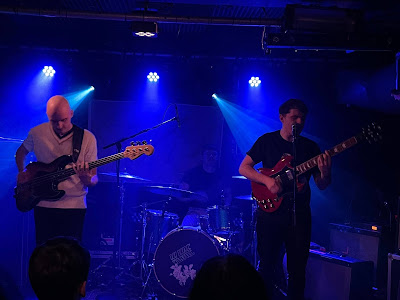 It's hard to know exactly where to start describing VLURE. Their sound is huge melting pot of so many strands of music that they've concocted a recipe from to create the most visceral thrilling fusion we've witnessed in a long long time. There's elements of rave culture in here and the transfixed response that they get from the Edinburgh crowd feels like that is what we're experiencing, but in the synths you can hear eighties influences permeating through as well. Whatever their secrets are the results are magical, it's twelve hours since they left the stage as we write this and we're still buzzing on a high that's longer and more powerful than most gigs we've ever been to.
You sense that the band go through that same experience. Hamish comes amongst us twice, veins bulging in his neck as he eyeballs us seeking that all-important connection as he bellows out the words to these songs of catharsis and celebration of friendship. "Give me a release" is the key line of single Heartbeat and as it hits the breakdown and the crowd bounce as one, it's exactly what the hundred and fifty of us lucky enough to witness this get from them. They also ask questions - "what's life but a storm, where's the sense, what's the norm?" is repeated like a mantra by Hamish, among us once again - like the answer is key to everything. Almost drowned out by the crowd, the question feels like it's also the answer. 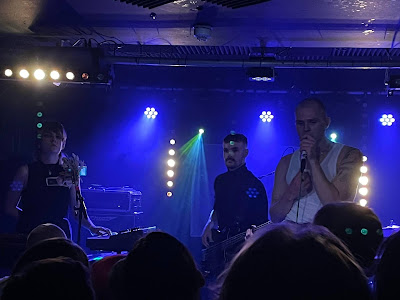 The band, Conor excepted who joins Hamish in the crowd for Euphoria, provide a real contrast, almost oblivious to the actions of their front man as he stands shirtless beating his chest and pointing at the tattoo under his breast, eyes staring into the middle distance, but each one of them is an absolutely vital component to what VLURE are. Whether it be Alex's synths or the rhythm section of Niall and Carlo, VLURE's sound is very much a collective, a symbiotic collaboration of like-minded souls which they invite us to be part of. Hamish tells us this towards the end of the set, that we're now part of them and by this point they've shattered all the boundaries between them and us.
They only play for forty minutes, including a cover of Faithless' God Is A DJ which they make their own, the "this is my church" line in particular feeling so appropriate. They don't need to play any longer. To dilute this right now with songs they've not quite finished to fill it out would be an error and you sense VLURE are more than wise enough to know this. They seek perfection, they seek connection in their music. All or nothing. As it should be. If you're anywhere near one of their upcoming shows, cancel everything and make sure you attend.
VLURE played Desire, Heartbeat, I Won't Run (From Love). The Storm, Show Me How To Live Again, Shattered Faith, God Is A DJ, Euphoria and Heartbeat.