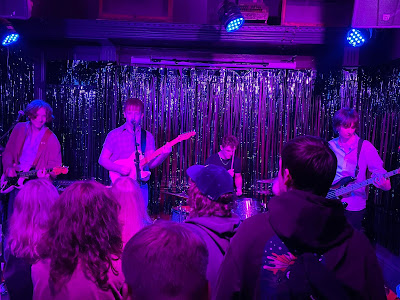 Saturday night saw the first ever show by Dan Selwood and his band opening for Trunky Juno at The Castle Hotel in Manchester. The four-piece band put on an impressive debut showing that betrayed the fact they hadn't played together in front of an audience before and put Dan's songwriting very much on our radar.

Dan Selwood has been around on the Manchester scene for a couple of years, the Glossop-based singer-songwriter, releasing his Dirty Hands EP in 2019 and a couple of singles last year. His reputation and the anticipation of this first show with his band has spread though as The Castle's music room is packed out as they take to the stage at eight o'clock on a Saturday night. Gigs here don't get full for the supports and we're a little taken aback by this turn of events.

The set is short; just six songs lasting twenty or so minutes but it's long enough to make a real impression. With Tom on guitar and backing vocals, Oscar on bass and Joel on drums (or "shirtless Joel" as he becomes known after removing his shirt in the sweat pit after two songs), Dan has assembled a band that takes these songs to another level. If we hadn't known this was their first gig there was no way we would have guessed it, such is the accomplished manner and confidence with which they go about the set.

All six tracks have the effortless feel of a band knocking out singles for fun. Dan's voice is strong on its own, but augmented by Tom's backing vocals and a really tight rhythm section, it feels quite special. Round the room people are singing, or mouthing, along with these songs and the roar of appreciation at the end of each song takes them aback a little, although there's a modesty to that because it's really absolutely deserved. The Mess I've Made, Cigarette and I Need This More Than You are particular highlights if we had to choose, but the other three songs could equally claim that mantle.

With a crowd and a performance like this, the possibilities for Dan and his band going forward appear exceptionally promising. It's rare to see a room so packed and a crowd so animated by the music, particularly as we come out of a difficult year and a half for live music, but for a band playing their first show it's pretty much unheard of.  We await more.