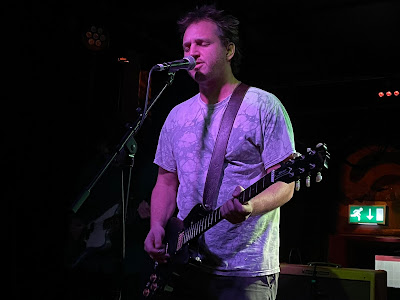 Willy Mason's UK tour in support of his new album Already Dead rolled into Manchester for two nights this week. We caught up with the second of them, a sold out show at the Night And Day Cafe where a twenty-song set delighted an attentive crowd. Support came from Voka Gentle.
Voka Gentle open up the show. Dressed in boiler suits, a trio featuring sisters Imogen and Ellie Mason and William J Stokes - they joke we're getting two lots of Willy Mason as a result. They mix acoustic guitar, synths and samples, spoken word and sung vocals as they showcase a number of tracks from their new album Writhing across a half-hour set that's diverse in its style and approach. The performance is also visually striking as the three of them immerse themselves in these songs. It's a little frustrating that some near the front think their conversations are more important than the artist, but a selfish few apart, they get a strong reception from a crowd who they would be new to for most. 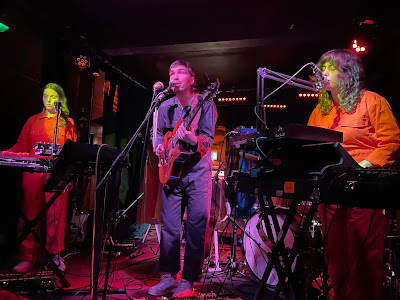 It's sixteen years since we first saw Willy Mason in upstairs bars around Camden in London, long drunken nights before he was catapulted for a brief period on to Radio 1 with the release of Oxygen and it felt like he might become the next alternative superstar. He never really was a game player though, not a careerist musician and those opportunities passed by as he remained true to his roots, retaining a loyal fanbase in the process. This year's Already Dead album is his first for nine years since 2012's Carry On and is rich in the songwriting tradition that Willy has taken and placed his own indelible mark on.
Tonight's set list is an indicator of where his mindset is - only Oxygen is played from his debut Where The Humans Eat and its follow up If The Ocean Gets Rough fares little better with just The End Of The Race and We Can Be Strong. Whilst he cracks at a smile at the audience singing along with him at these memories, you sense his real joy is in his most recent creations - eight of the tracks from Already Dead plus one from the accompanying Bok Bok Hill EP, the standalone 2020 single Take It Off and two unreleased ones make up more than half the set and Carry On contributes another five. While other more successful artists lean heavily on their heritage, Willy Mason has moved on, grown up and retained his integrity and authenticity. 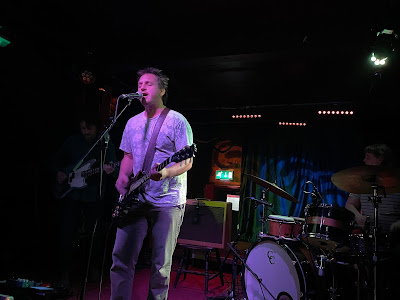 Accompanied by the fantastic rhythm section of Charlotte Anne Dole on drums and Alex Heane on bass who form both the perfect foil for Willy's lived-in vocals and provide light, shade and depth to these songs, Willy rattles through twenty songs in under an hour and a quarter. There's not a great deal of audience communication; the music does the talking for him, delighting both those who've followed him through the fallow periods where he's not toured and those here to reminiscence on the albums that he barely touches but who are drawn in by the sheer undeniable quality of the songwriting craft and honest, open and raw delivery that's free of any false showmanship. A rare breed these days.
Willy Mason played You'd Like To Be Free, Reservation, Talk Me Down, Outwit The Devil, One Of The Good Ones, Gilded Lie, What Is This, Take It Off, The End Of The Race, She Did It, One Glow, Shadows In The Dark, Restless Fugitive, If It's The End, If There's A Heart, Oxygen, Worth It, Youth On A Spit, I Am Love and We Can Be Strong.

Willy Mason's official site can be found here and he is on Facebook and Twitter. His UK tour continues at Leeds Brudenell Social Club (November 10), Chester St Mary's Creative Space (12), Newcastle Cluny (15), York The Crescent (16) and Birmingham Glee Club (17).
Voka Gentle's official site can be found here and they are on Facebook and Twitter.  They support Willy on his remaining UK dates and then head on their own tour at Glasgow SWG3 Poetry Club (November 20), Bristol Louisiana (21), Manchester Night People (23), Brighton The Hope And Ruin (25), London King's Place (26) and Stroud Goods Shed (27).
________________________________
Follow Even The Stars on Twitter at @eventhestarsuk and like our Facebook page for all the latest updates
Posted by Even The Stars at 07:00