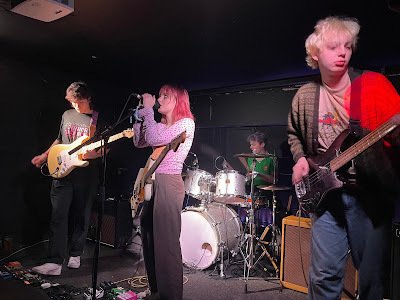 NewDad are the latest of the new breed of bands to cross the Irish Sea to win the hearts of the UK's music lovers. Hailing from Galway and with an impressive selection of singles under their belt, they've sold out venues around the country on their first visit, including Manchester's Yes Basement on Sunday night where they mixed singles with tracks from their Waves EP and new songs that whet the appetite for what's to come.
Crush are a last minute addition to the line-up following the withdrawal of the original support, and given the gig had sold out weeks in advance, we can only assume the rapturous response they get is from people who've been blown away from them on first impression. It's no surprise; they possess a sound that's easy to fall for, reminiscent in parts of some of the more accessible areas of the shoegaze movement, but with a knack of writing songs that hook you with their underpinning melodies and Amber's dreamy vocals that float enticingly on their surface. 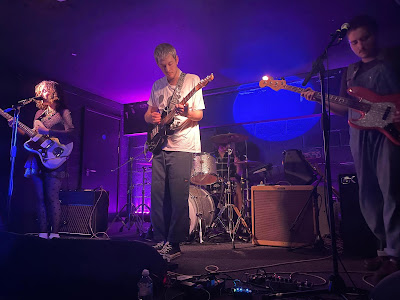 Recent singles So Strange and Chewed are dispatched with early in the set and promisingly they're not the strongest songs on display tonight. False Start and Features in particular suggest that there's plenty more to come from them in 2022 as they start the year with their own headline on this stage. A little different from many of their contemporaries on the Manchester scene they seem committed to following their own path and their own identity and this is a very good thing indeed.
The buzz around NewDad has been quite remarkable with their appearances on 6 Music's playlists and their UK shows selling out rapidly, to the extent that their next Manchester show in April has bypassed a number of circuit venues and headed straight to Gorilla. Their appeal seems to span genders and age ranges too more noticeably than most bands that come to town so early in their career. They're still very much a band learning their trade, Julie's lack of a setlist means she has to repeatedly ask her band mates what song comes next and a complicated changeover of guitars to play just one song Ladybird at the end of the set might have derailed them had the audience not been completely smitten by them at that point in the evening.
They open with Drown, the opening track from their Waves EP that announced them to a wider audience earlier this year after a series of standalone singles in 2020 that filled the gap from their first release coinciding pretty much with the start of lockdowns and curtailing their ability to go out on the road. It's followed by Banshee, a new song from their forthcoming second EP, and it confirms that NewDad aren't going to follow in the footsteps of their contemporaries and try and blast us off our feet rather slowly wrap themselves around us with songs with taut tight claustrophobic rhythms whether it be in the familiar sounds of breakthrough track Blue, early single Cry or the brand new Say It and In My Head. 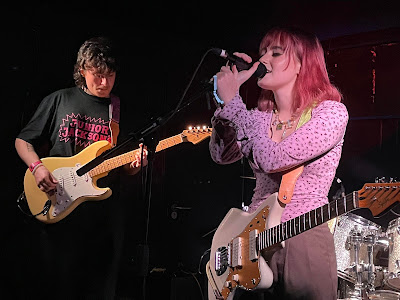 The main set finishes with the telling juxtaposition of their debut single How, released a short eighteen months ago, and their latest Ladybird that's been out in the world two weeks. It shows the consistency in approach and quality of NewDad's songs but also demonstrates how much they've progressed as a band without betraying their roots. The Manchester crowd isn't done with them yet and the encore starts with Waves' title track before they deliver their take on Pixies' Gigantic, somehow managing to capture the raw energy of the original whilst putting a very NewDad slant on it.
New Dad played Drown, Banshee, Blue, Say It, Cry, Hide, I Don't Recognise You, Slowly, In My Head, How, Ladybird, Waves and Gigantic.