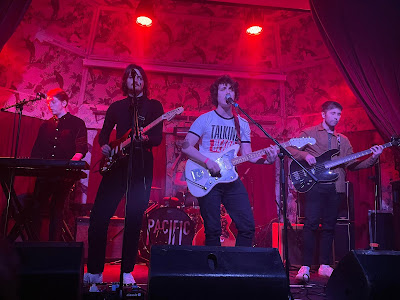 Fever opened up for Pacific at Manchester's Deaf Institute on Friday night . Over half an hour they delivered a nine-song set featuring recent singles My Imagination and Time Will Define as well as seven other tracks that could all stand up as singles in their own right.
Fresh from supporting Blossoms, on whose Very Clever label they've released their recent singles, Fever are now seeking to build on the momentum gained by that exposure. They've recently announced the release of their first vinyl single - a 10" featuring those two recent singles My Imagination and Time Will Define as well as two new songs that don't get an airing tonight.
Fever trade in gloriously optimistic sounding three minute alternative pop songs with enough variety in them to ensure that they're not simply repeating the same pattern over and over. It's a trick that served their label owners well in their early days and Fever have a number of songs in this set that have the same timeless qualities; songs that will sound familiar on first listen because they're unashamed of having overt influences and not afraid of pushing hooks and melodies to the fore. A new track Gold Intentions is a real standout and it's always a good sign for an emerging band when the newest song does just that given it sits around seven of the eight songs they've released to date.
Musically they're very tight despite suffering from monitor issues throughout, sounding very much like a unit that moves together rather than individuals. James' vocals sit dead centre, powerful without being overpowering and with a range that's expressive enough to make these songs feel like they're personal rather than rock and roll bravado. With an impressive and growing bank of songs in their pockets and a live set that makes it very difficult not to warm to them they've got every chance of breaking through given the right opportunities and exposure.
Fever played International Dream, Electric, Jungle Man, Money Love, Life Feels So Real, Gold Intentions, Honesty, My Imagination and Time Will Define.
Fever are on Facebook and Twitter.
Their debut 10" single featuring the already released My Imagination and Time Will Define plus two brand new tracks Out Of Luck and Life Feels So Real (When You Feel What I Feel) is available for pre-order from here.