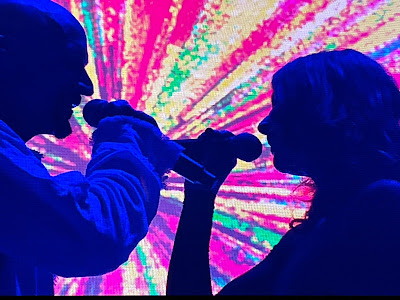 James' UK tour in support of their sixteenth studio album All The Colours Of You rolled into the cavernous surroundings of Birmingham's Utilita Arena on Friday night. A career-spanning set mixing chart-busting classic tracks, deeper cuts and fresh new songs had the crowd dancing from start to finish feeding off the energy emanating from the nine-headed beast of a band operating at full throttle. Support came from Happy Mondays.
You never quite know what you're going to get with Happy Mondays. You never did. It was somehow part of their charm when they were filling places like this as the headliners back in their pomp. Musically they're a tight unit, the rhythm section and guitars of Paul Ryder, Gaz Whelan and Mark Day provide the unmistakable groove that always drove them along and never got the attention they deserved because of the focus on the trio of Shaun, Bez and Rowetta. Not a great deal has changed in that respect and is unlikely to ever. The contrast between Rowetta's show-stopping vocals and Shaun's often mumbled drawl, autocue always in sight to help overcome his recently diagnosed ADHD which he references between songs, is a strange one - you wouldn't put them together but it's that relationship that makes them so fascinating to watch and listen to, even between songs when Shaun tries to taunt an unimpressed Rowetta. 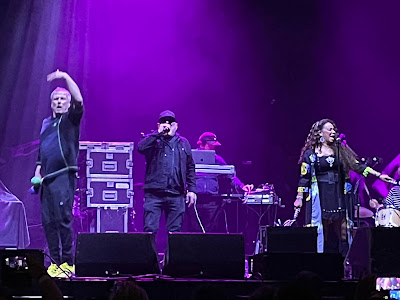 The songs that people grew up dancing to in indie clubs across the land still evoke a strong reaction - and the Happy Mondays have plenty of them that go down a storm tonight. Heavily focused on their most successful album Pills N Thrills N Bellyaches - pretty much all their hits are rolled out. Kinky Afro, Loose Fit, Hallelujah, Step On and Wrote For Luck helped define a time and place and for an hour thousands are transported back there. They're far from perfect, but anyone who actually remembers that far back, will recall they never were. It was part of their charm, in fact it was pretty much all of their charm and they're too old to change now.
James on the other hand would be long dead if they didn't change. It might have stopped them being more successful than they are - although they're selling substantially more tickets still than the media darlings of Suede and Manic Street Preachers despite refusing to play many of the games that bands of their age are expected to in these history-obsessed times. Tim asks half-way through the set after a stunning nine-minute Walk Like You, from 2014's La Petite Mort "who's sitting around waiting for some 90s nostalgia and not living in the present?" as a challenge to those who, like the gentleman near us, was shouting Sit Down over the top of every song. 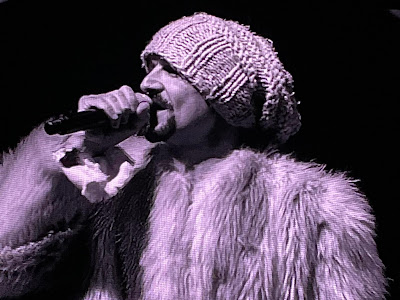 The set is certainly a challenge. Other than the trio of Laid, Sit Down and a curfew-busting Sometimes at the end, it never stays still. Where some bands might divide a set into sections around albums or periods of their history, James dart frantically from one time to the next and because they reinvent and reinvigorate the songs, and if we're being frank, themselves too, other than the volume of the roar of recognition, it'd be impossible to time-stamp these songs.
Tim claims at the end of an improvised segue between All The Colours Of You and Many Faces, two more recent songs with a inclusive theme and rejection of hatred and division, that they're making this up and they don't know what they're doing. The relationship between the nine of them, which seems healthier now than we've ever seen it, means they can fly by the seats of their pants and take chances and deliver something that's fresh and exciting. 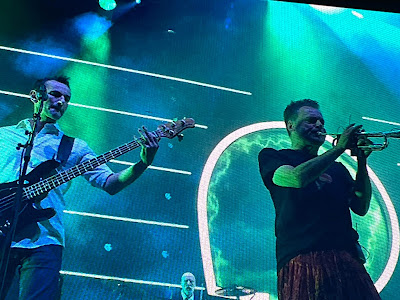 It's their lifeblood, their oxygen and when it's flowing at its peak, then James deliver shows that transcend the traditional concert and tonight feels like one of those special times. Saul says at the start of the encore that it's one of his favourite James shows ever. Easily said in the heat of the moment, but if you woke him up just now, he'd probably still tell you the same. "Lovebombed" is how Tim described it and we can't find a more appropriate word right now. 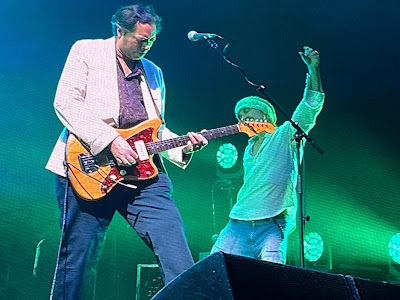 As ever the set changes with the mood of the venue and the night. Tomorrow has a power that transmits all the way to the back of the never-ending standing area in this most soulless of arenas on this tour whilst Honest Joe's booming beats have somehow made the journey from an improvised album that was almost a career suicide note to a spectacular highlight that really sees them let go of traditional song structures and allow their creative spirit to guide them. "We're getting too old to play that one" Tim jokes at the end.
They change the set on the fly too. After a soaring Moving On, another song that was simply born in the wrong era to be a chart hit single, Tim goes to each of the others and they go way back in time to 1982 and Hymn From A Village. It's a wise move as it keeps the momentum rolling rather than taking it down, although by this point it's an unstoppable juggernaut. Come Home and Curse Curse are celebratory, uplifting and cathartic despite the less than so lyrical content. They've finally nailed Wherever It Takes Us, a wandering song off All The Colours Of You where the verse and chorus feel like the strangest bedfellows at first glance but perfect when you've seen them together a few times. 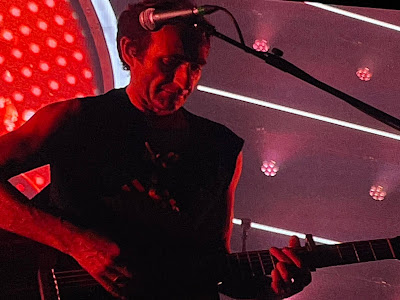 Getting Away With It (All Messed Up) is a perennial favourite, a song that has survived their tendency to rest songs for periods. It's telling that many of the songs we'd class as James-by-numbers - if such a thing were actually to exist - Say Something, Waltzing Along, How Was It For You, Ring The Bells even Out To Get You would be our contenders if you care to know - where the unpredictability factor is lowest are absent tonight yet this one never feels tired or in need of a fallow year.
The main set finishes with a stretched-out extended Sound where the band take themselves and us on a journey that never has the end point marked out until we reach it. The Utilita's sound, one of its positives, allows the delineation between Saul's guitar and Jim's bass to be clearly heard as they stand inches apart as if they were in the practice room working out a new song and not with ten thousand pairs of eyes upon them and the big screen that shows their fingers at work on their fret boards. 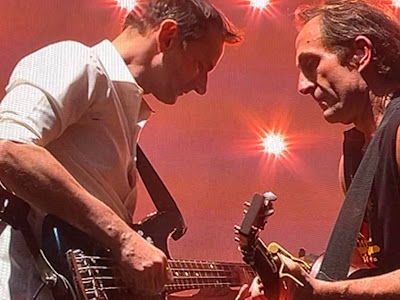 That James still write songs that match, and in cases better, anything they've ever done is proven by the encore opener Beautiful Beaches, their most powerful "single" since they reformed back in 2007. Laid feels even more ramshackle than ever, and so much better for it, as they extend the intro to allow the audience to sing the first verse before Tim comes in. He then stops to explain that they've started to play Sit Down again because it was the song his father-in-law asked him to sing to him on a video call shortly before he died of COVID last year and it now has new resonance to him. He sings the first verse without accompaniment other than ten thousand voices including the relieved gentleman stood near us before the band come in and everyone loses themselves in it. It feels possibly more relevant today than it ever has. We live in shit times where people's selfishness has replaced a selflessness and the song is about unity and surviving together rather than fighting on your own.
It's almost curfew time but no one is going to allow them to go. Tim tells us they've been told they're over curfew, but that we're going to have to say "fuck you" to that and they finish with a brief curtailed Sometimes, sneakily dodging the clockwatchers by stopping playing and just singing unamplified with us with their instruments downed before taking in one final roar of approval. And then they depart into the night, leaving us to wonder how the hell we're going to sleep with the adrenaline of the night buzzing through us.
James played Zero, Isabella, She’s A Star, Born Of Frustration, All The Colours Of You, Many Faces, Tomorrow, Honest Joe, Walk Like You, Moving On, Hymn From A Village, Come Home, Curse Curse, Wherever It Takes Us, Getting Away With It, Sound, Beautiful Beaches, Laid, Sit Down and Sometimes