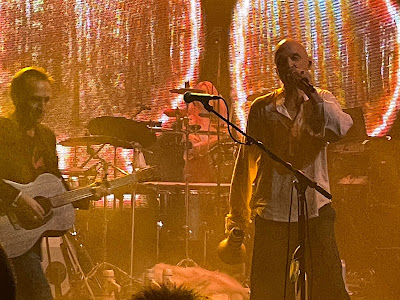 James warmed up for their forthcoming Arena tour with a two-hour career-spanning set at Wolverhampton's KK's Steel Mill on Tuesday night. Covering ground from 1985's second single to this year's sixteenth album with curveballs aplenty from across their catalogue as well as many of their biggest hits, they delighted an attentive crowd desperate for the unique connection that live music provides.
Bryony Williams opens up the evening, the selection of Wolves Music as a local artist to support James. With a couple of EPs and a recent three track single under her belt, she's already got a considerable local following, many of who make themselves known during the course of her set which picks from all three records. She's pulled together an impressive band that gives a harder edge to the songs, with the three songs from her Conscious EP - opener Scared and final two tracks Whirlpool and Hypnosis benefitting most from that approach. 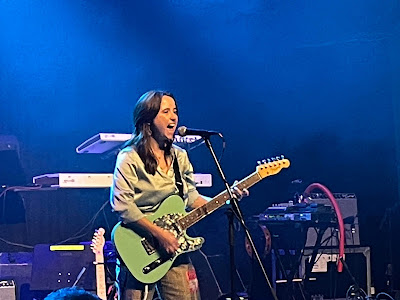 She's very much the star of the show though, not fazed at all by the occasion, confident enough to crack a joke about signing people's chests at the merch desk before apologising to her Mum who's in the crowd. Her two most recent tracks - Little Tree and Silhouette - appear mid-set and show that's she's still developing and progressing as a songwriter from the slightly poppier Cherry Red and I Can Be from last year's State I'm In EP. Overall though, Bryony was an excellent choice as support and hopefully won a raft of new fans tonight as the audience response was both attentive in listening and loud in its response for an exceptionally talented and promising emerging artist.
Fashionably late as ever, James make it to the stage just after nine and start with two songs from their recent All The Colours Of You album. Tim chides us for being maskless and tells us the first song is quite apt - as Zero starts with the line "we're all going to die" which is sung back at him almost deafening him out. It's a very atmospheric opening, a slow build of a song but one which they seem to now have worked out how to capture live. Isabella has never had any such issues, one of the most immediate upbeat tracks they've released in years, the red lights act almost as a warning to avoid the song's character because she's trouble. Already, just two songs in, you sense the nine of them up on stage are going to ensure we enjoy the evening by them enjoying it themselves. This tour promises to be fun yet unpredictable.
Sound being in the set is almost as predictable as you can get with them, but for it to be dispensed as the third song certainly isn't, yet its mesmerising winding journey, that Tim describes as being open-ended and all the better for it, never feels tired as it's never the same twice. Jim and Saul are almost eyeball to eyeball encouraging each other whilst Tim prowls the stage and loses himself in dancing. She's A Star starts with Saul's guitar riff of the souped-up electronic version that's deferred to the stripped-down acoustic version in recent years, but tonight, with the excellent sound of the hidden treasure of a venue that is KK's Steel Mill, it soars as high as it's ever done as Tim and Chloe's vocals come together to lift the song. 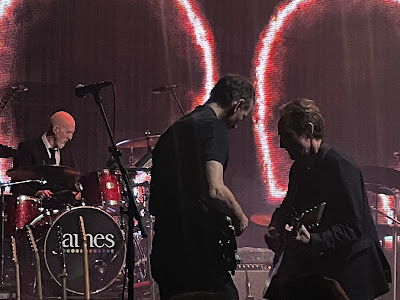 "Not many people were writing songs about mothers giving birth in 1989" gives away the next track, the welcome return of Gold Mother to the set after an eleven-year absence. It's perfect for this iteration of James as it opens up so many possibilities - Andy's trumpet is a focal point, the dual drums of Debbie and Dave provide the sound of a series of contractions as Tim seeks the on-stage connections that he can't get from coming out to us in these strange times. Curse Curse continues the almost random trip through James' back catalogue, its unmistakable calling card electronic hook line ringing around the room until they drop the song down and Chloe takes over the vocals in the breakdown through her megaphone as it slowly builds back to one last euphoric chorus.
Wherever It Takes Us is clearly a band favourite from All The Colours Of You and it feels like they're finally starting to get it together live given its many strands, the verse and chorus that could be from different songs. It finishes with Tim atop one of the monitors as the band behind him give it the lift of multiple voices.
Miss America follows with its first ever live performance, starting with an extended mournful violin solo from Saul. It's very different to the performance on The Campfire EP they've just released, but likewise is far superior to the album version. The audience shut up and listen as Tim requests - whether it's post-lockdown or just tonight's crowd, but it feels, at least where we're stood, there's more appreciation of the band and being able to see them again. Saul alludes to this by responding to Tim's comment that they might not be able to get away with it in the sheds by suggesting fucking anyone who tells them what to play as they play what they want and they haven't got to being a middle ranking band by doing the obvious. He continues by stating that at points in the last two years he felt they might never play again as a band and we're here to celebrate that and thanks us for sticking with them.
I Wanna Go Home makes a welcome reappearance in the set and that audience attention is replicated as the final track from 2008's Hey Ma album broods and builds before Tim holds the longest note as the band let loose behind him. There's so much going on across the stage it's hard to know where to focus. The opening strains of the slightly slowed down Born Of Frustration that was so successful and well-received over the summer bring huge cheers of recognition from a crowd that had been impressively patient and present so far - and once again it's a subtle twist on an old favourite that keeps it fresh and vibrant. 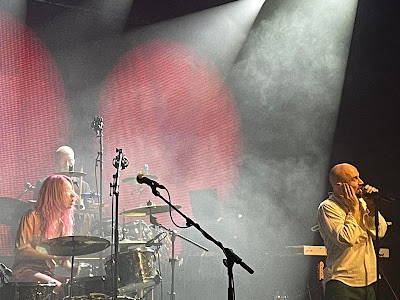 Debbie's drums are moved forward on "HMS Deborah" for a wild Hymn From A Village that they perform as a five-piece with two drummers as Dave remains on stage and Jim and Adrian. A song that's forty years old played by a pink-haired female drummer who wasn't born until a decade after its creation was probably not something the four young men who wrote it in a Withington scout hut ever envisaged, but here it is, sounding like it could have been written yesterday such is its infectious energy. From one of their earliest songs they move to their most recent single Beautiful Beaches and the transition feels seamless, like the band are somehow coming full circle with a different line-up and sound, but with the James DNA lit up in bold. At the end, as Tim jumps down off the drum riser where he's gone to encourage Debbie to go faster and wilder, he jokes that he's looked at the setlist and it's long and they're unfit after three years without playing a set of this length.
The next curveball is the resurrection of Maria's Party, a song that the band talked excitedly about in the summer of 1992 which ended up with a mashed-up version with a Larry vocal on Wah Wah. It's one of many James songs that get lost in the sheer volume of material they produce and its return is a welcome one as it offers like much of tonight's set the opportunity for the nine-piece James to spread their wings musically.
There's time for one last new one before the onslaught of hits that finish the show. All The Colours Of You has really come to life live, its references to lockdown feeling particularly appropriate as we (hopefully) come out the other side whilst its references to the political and social upheaval that coincided with it have a real resonance still. To emphasise they add the refrain to Many Faces on to the end and the audience sing back the important message - "there's only one human race, many faces, everybody belongs here" to Tim as he stands atop his monitor and it's the band's turn to watch their audience.
"We needed that, we all need that" he tells us before they launch into Tomorrow, which has Tim singing right in Saul's face and Getting Away With It (All Messed Up), their unofficial theme tune, to bring the main set to an end. The crowd are rewarded for their patience and attention and respond in kind, letting loose. 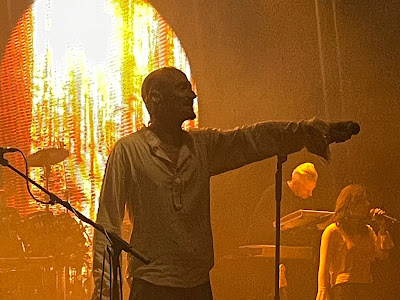 It's something the band recognise, quickly adding in Come Home to the encore in place of Honest Joe or Stutter and Tim once again moves around the stage, dancing with first Chloe then Debbie, whilst the audience throw their arms up and sing along every word like they remember from back when it was first released. These older songs feel somehow more powerful given everything that's happened in the past two years and we take Sometimes from them, once they've surrounded Adrian for his guitar solo, singing it back for several minutes without an invitation and without any music coming from the stage.
It's a reminder of the importance of live music for the mind, body and soul and there's really only one way they can end the evening - with Sit Down. They've shied away in the past from that as it's the obvious close to an evening, the trick most ordinary bands play by saving their biggest crowd favourite for last, but to coin one of their own titles we are living in extraordinary times and as it drops down and Tim almost whispers the "those who find themselves.." section it feels like the perfect end to an evening that brought so much joy and release. James will always be James, always seeking to challenge their audience but with weapons of mass celebration in their back pocket to finish off the night.
James played Zero, Isabella, Sound, She’s A Star, Gold Mother, Curse Curse, Wherever It Takes Us, Miss America, I Wanna Go Home, Born Of Frustration, Hymn From A Village, Beautiful Beaches, Maria, All The Colours Of You / Many Faces, Tomorrow, Getting Away With It (All Messed Up), Come Home, Sometimes and Sit Down