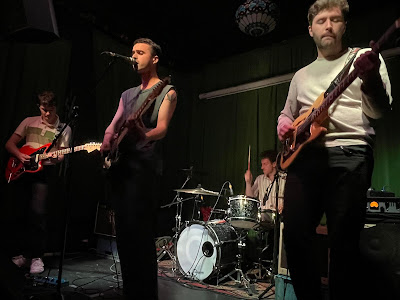 It's sixteen months since Odd Morris should have made their Manchester debut and the wait has been a very long and frustrating one since we saw them just before lockdown for the first time with The Murder Capital in London. Over a short nine-song set they charmed and disarmed a captivated Manchester audience. Support came from Yuka Tree.
Way back when Yuka Tree had just released their debut single Preacher and played their first live shows before we all went into hiding so they're now faced with the task of realighting that momentum that was starting to build behind them. They start off with an instrumental before going into their recent single The Man In The Leather Laced Shoes, which Kieran confuses as their debut laughing it off by saying "I've had a drink" and then introducing every other song until they play Preacher as "not our debut single." It's a good rescue and one that warms the audience to them. 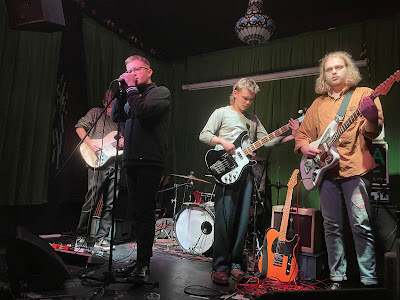 Their best moments are when they turn up the volume and crank out faster-paced tracks including one that wishes long life to a list of characters including Marcus Rashford whilst Kieran ventures down into the audience as well as Preacher and their final track. It may be their style and laidback approach, but it feels like there's a lot more potential bursting to get out of them and it'll be interesting to see how they develop over the coming months.
The room has filled out considerably by the time Odd Morris take to the stage for their first ever show in Manchester which is reassuring given the poor turnouts we've seen at some shows recently for bands that have played here in the past. Whilst there's been a lot of hype about bands from their native Dublin, Odd Morris have sneaked in under the radar with a series of singles of which opening track Cold Water and Lilac Leaves survive in the set and their new EP Cityscape The Ballet which they play in full alongside a couple of songs listed as untitled on their setlist.
Odd Morris's approach is a warm reassuring one, stripped devoid of bravado and showmanship and wearing their hearts on full view on their sleeves and in the words Darragh is singing. You can see the cathartic effect letting these words out into the world has; and the audience, to their absolute credit, stand and listen and watch and give them the acknowledgement they deserve at the end of each song. Darragh explains that Silhouette is "about me being honest with myself" and it's a powerful breakdown of the toxic masculinity that is hammered into us from a young age and how we should shun it and open ourselves up. It's a subject other bands have addressed in songs, but it feels more powerful a narrative here and in the flesh. 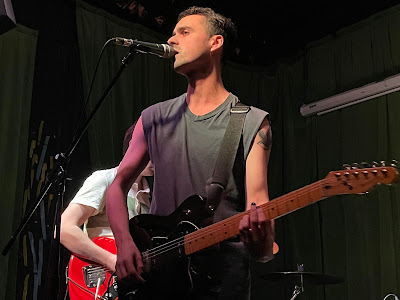 Less is most definitely more, there's space to breathe in these songs - Sam's drums are understated yet the bedrock on which everything sits whilst Ciaran's bass and Kris's guitars weave soft magical patterns that perfectly complement the simple honesty that sits on plain view in Darragh's vocals that dip down below and rise above the surface like emotions riding the natural waves they do if you live your life being true and honest with yourself. The two new songs are both different yet true to the Odd Morris palette, lots of latent beauty in there but you sense much more will reveal itself to you once you get the opportunity for them to soak into your conscience.
The aversion to volume and power doesn't mean that there's no sonic ambition in these songs though. You Tried and the closing and Cityscape The Ballet's title track are complex, tight and taut and wrap themselves around you, getting under your skin in a way only the very best music can and those two new songs leave a similar impression too. The queue at the merch stand at the end and the excited conversations between first time viewers of Odd Morris and the band tell their own story - here we have a band that makes connections, thrive off the response to their music and, in their own way, make the world a better place by being around us.
Odd Morris's website can be found here and they are on Facebook and Twitter.
Our review of Cityscape The Ballet can be found here and it can be pre-ordered on vinyl here.
They play London Sebright Arms (5) and Brighton Mutations Festival (6).
Yuka Tree are on Facebook and Twitter.
________________________________
Follow Even The Stars on Twitter at @eventhestarsuk and like our Facebook page for all the latest updates
Posted by Even The Stars at 17:51