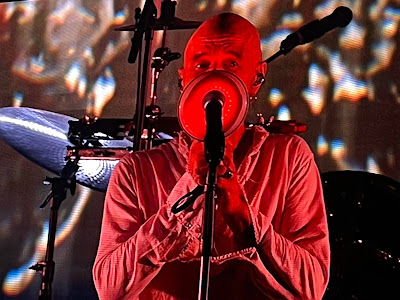 James and Happy Mondays' UK and Ireland tour rolled into Cardiff's Motorpoint Arena for James' first gig in the Welsh capital for ten years and their first in this venue since 1999. As in previous evening, James' set was a career-spanning one, but one that setlist watchers would have been thrown a few curveballs by as they introduced a few rarely-played tracks to the set without ruining the momentum and energy of the night.

Happy Mondays are on good form tonight. Shaun is in a good mood, joking that if he started telling real jokes he'd be banned from television for ten years because he's not the most PC person around and starting entertaining interchanges with Lord Beswick aka Bez and Rowetta. His fixation with the year songs were released is very much still there as a reminder as is his autocue, but his vocals tonight are the strongest they've been on the tour so far whilst Rowetta, as ever, is the star performer from the opening lines of Kinky Afro through the set. 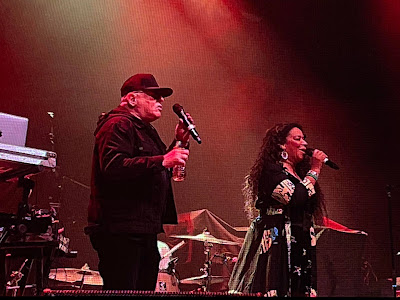 Later in the evening, after Come Home, Tim tells us that without the Mondays that song (and later Gold Mother) wouldn't have existed had they not taken them on tour with them and been corrupted by their behaviour (missing gigs, stealing riders) and influenced by the loose sounds that became classed as baggy by the music press at the time desperate for a label. They are loose, full of imperfections, songs don't always seem to know exactly where they're going - particularly some of the Pills N Thrills N Bellyaches tracks - but it's that unpredictability that means that they're still endearing and interesting - rather them than a set of word perfect renditions of songs from thirty years ago that have had the excitement and thrill stripped from them.

There isn't quite the same energy in the room as there has been on previous nights as James come on stage, primarily because it's a Sunday night so thoughts might be considering the prospect of work in the morning. However, James take on the task of making people forget the day to day dreary humdrum for two hours in which the nine of them provide a visual and aural spectacular that has moments of pure celebration when they roll out their hits, stimulation and challenge of the senses as they pull tracks out of their comprehensive back catalogue and revisit them and the odd moment where they slow things down and become more contemplative, trying new ideas out on a packed room and seeing if they work. 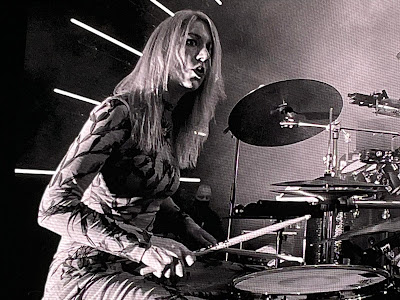 Most of the time it's successful. God Only Knows is resurrected and played for the first time since 2010 and features a middle section that's improvised on the subject of toxic male behaviour within organised religion and the patriarchy. Seven, "one of our rare love songs" that opens the encore, hasn't appeared in a set since the Australian tour in 2018. Their experiment with playing Miss America behind a curtain and requesting the crowd to pay attention doesn't quite work as the visual impact is restricted and the crowd around us at least lose a little interest and the momentum drops, but it's a brave move and one that James have never shied away from and it's rare that they miss the target. It's immediately recovered by a looping chaotic Gold Mother that always feels on the verge of implosion, but never does. Tim references the Mondays again as an influence on this track although not on the subject matter of childbirth. 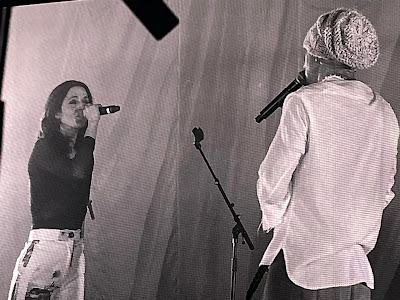 There's a real sense of connection between the band on stage, little smiles, stopping to appreciate the others when they take the lead and a touching moment that's amplified on the big screen when Tim sings the first verse of an emotional Moving On that's dedicated to those who have lost people to Jim who looks visibly touched as the camera zooms in on him. It's almost as if Tim being prevented from going out to the crowd has made them reconsider the inter-band interactions and created something that's equally as, if not more, powerful than the crowd-surfing and barrier-standing.

There's lots of subtle twists tonight. Tim ad-libs Come Home's thirty years to "after sixty years I've become the kind of man I might have dated" to reference the passing of time since its release, Chloe takes the lead at the start of the Many Faces refrain to a triumphant All The Colours Of You and Honest Joe feels like they've finally captured it fully with Saul's violin playing a key role for the first time since their epic 1994 Glastonbury version of it. 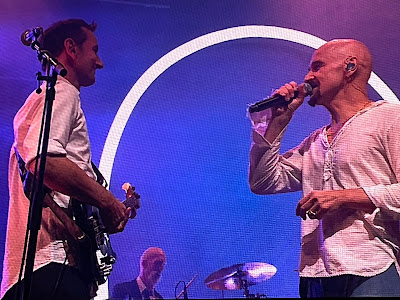 The response to the set grows as we get closer to the end, the final run of Hymn From A Village, which betrays its forty years, Curse Curse, a partly-improvised Sound that impresses Tim as much as it does us, Getting Away With It (All Messed Up), Seven, Beautiful Beaches, Laid and Sit Down, feels like an unstoppable wave that hits the crowd. Laid and Sit Down finish the set off, both are played pretty straight other than allowing the audience to take the former to the chorus before Tim comes in and repeats it, but by that time James have done their experimentation and are sticking to the tried and tested adage of sending the crowd out of the door buzzing and with that final memory of the show as one they will talk to rather than what they'd wanted and missed.

James played Zero, Isabella, She's A Star, Come Home, God Only Knows, Honest Joe, Miss America, Gold Mother, All The Colours Of You, Many Faces, Moving On, Born Of Frustration, Wherever It Takes Us, Hymn From A Village, Curse Curse, Sound, Getting Away With It (All Messed Up), Seven, Beautiful Beaches, Laid and Sit Down.