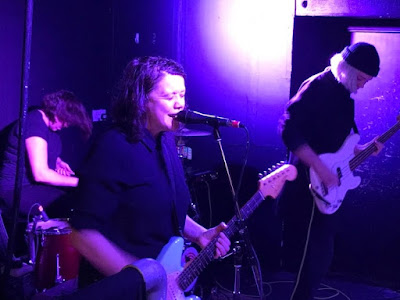 To coincide with COP26, The Vegan Society have teamed up with Blue Dot to host a short series of events, gigs and discussion panels to raise awareness of their Plate Up For The Planet campaign. Eating vegan is one of the best ways to reduce your environmental footprint. Blue Dot invited Manchester's LIINES along. The three-piece played a storming fourteen song set, featuring old favourites and a host of amazing new tunes. Stuart Ralston went home for the evening and reports back.

Our first visit to the cavernous underground complex that is The Flying Duck – a venue, bar and vegan restaurant - in the north of the city. The Vegan Society are hosting a three day mini festival with LIINES playing on the second day. Not Afraid is a powerful opening statement. Building slowly first with just Zoe's guitar, then vocal before being joined by Anna's bass and Leila's pounding drums. It builds and builds yet lasts only 2 minutes.

Last year's single On and On follows and bounces along. Anna's bass is often played as a lead instrument and at other times acts as a response to Zoe's vocals thus giving LIINES a massive sound. New one Look For You is dominated by a big powerful vocal performance from Zoe before Go slows proceedings down a little, well, by LIINES standards anyway. We are only ten minutes in and already they've delivered four songs. Another new one These Days follows and changes the tempo. It's the most reflective song in the set, showing a more soulful side to Zoe's voice and looks set to be the stand out track of their second album. 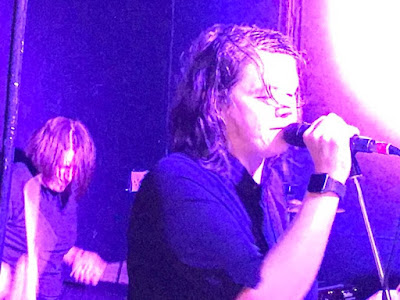 Songs from the debut album like Cold still sound as fresh as ever and again Anna's bass drives it along. Another new one, Wait, is almost a departure for LIINES as it clocks in at three and a half minutes. It demonstrates the chemistry between the three band members. Shallow on the other hand is all over in two minutes. Delivered at a breakneck speed, it's LIINES at their most punk.

Released last November (as a double A-side with On and On), Sorry is easily my favourite and most played record of the year. Opening with just drums and a wonderful guitar riff before the most incredible bass line comes in to dominate, with a snarling vocal. New single Keep On Going closes the show and sounds magnificent. Leila's powerhouse drumming dominates. Like a call to arms, it has a real Northern Soul vibe and the crowd love it. Fourteen songs delivered in little over half an hour, it's always a pleasure watching LIINES. This was their last show of the year and we can't wait for the new album.