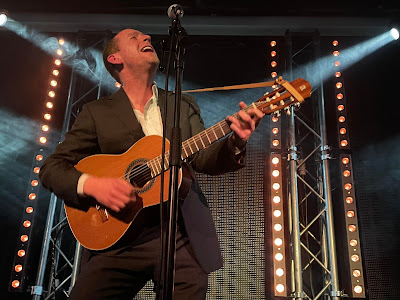 Stephen Fretwell might not come from Manchester, but it's here where he had most of his musical grounding and spent the time he was signed to a major label in the mid-2000s and the city very much treats him like one of their own. Back after a couple of very intimate warm-ups at the Eagle Inn and the Night And Day around the launch of Busy Guy, his first album for fourteen years, this Gorilla show sold out almost immediately and unlike many shows we'd been to there was very little in the way of no-shows. Support came from London's George O'Hanlon. 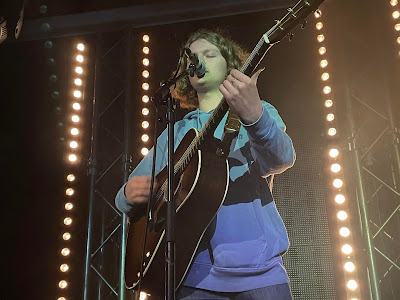 George Hanlon's six song set reveals a young man with talent, his songs are crafted with precision and delivered with an attention to detail in the music and the vocals that strives for perfection. He doesn't interact a lot with the crowd, whether that be nerves (forgetting his next Manchester date for example) or his natural stage presence, but he gets an appreciative response from the Manchester crowd awaiting the return of their prodigal son. With just four songs released to his name, he's very much still learning his trade, but it was a set of great promise.
Tonight is sort of a homecoming for Stephen. He talks about not wanting to do his usual talking and doing nonsense between songs because of the "musical devotion" of the city where he learnt his trade, wrote many of the songs from his first two albums, referencing writing - (Untitled) in 42s on Bootle Street and calling out friends in the crowd, including one Helen who he used to live with whose heckle he responded to by getting her up on stage to sing Run with him. She's not the only person to join him on stage - a gentleman called Caleb is plucked from the audience to sing on Rose and almost steals the show while having his life made and George Hanlon joins during the encore for a duet cover of John Prine's Speed Of The Sound Of Loneliness. 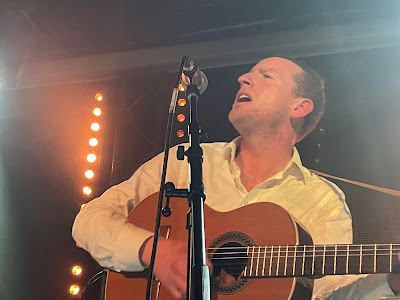 The set tonight is shorter than the previous night in Leeds by some distance yet there's a number of songs interchanged in the set - as Stephen walked out without his sketch of a setlist which he works from as he goes through the set. It's very focused on his recent album Busy Guy, but the Manchester audience doesn't seem to be too bothered by this - those that mouth the lyrics out loud can be heard quietly in the background of some of the more complex moments like Green and Pink as well as on the more familiar tunes like Emily, Run and opening track Do You Want To Come With? from Magpie and San Francisco Blues from its follow-up Man On The Roof.
The spontaneity of the evening is most evident when he recalls an unreleased song from the early years of his career called Like A Water Convene, which he says came into his head earlier in the day so he plays it - and he leaves without playing New York which we're not sure is intentional or whether he simply forgot without the setlist notes to remind him.
He's on great form - never the most naturally confident looking of performers even in his days of being signed, he punches the air at the end of most songs in triumph at getting to the end and applauds the audience as well, not something that's often seen and not behaviour you'd associate with a rock star. He pretends to mishear heckles, turning them round onto the heckler superbly and taking the audience with him. The love and affection towards him in the room is palpable though; the roar at the end of each song deafening, the quality of listening to the subtle fragilities and soul-bearing of these songs impeccable. 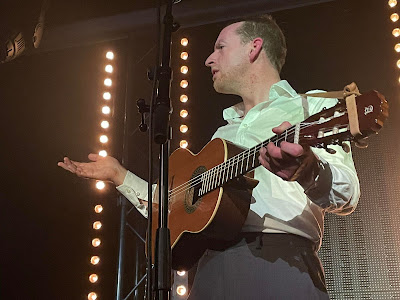 The imperfections, the little twists and additions planned and unplanned, make the evening magical and heartwarming. Being very different in many ways from the night before in Leeds means it's even more special in a world where music is becoming more homogenised, planned out to the last detail and lacking in risk and moments of chaos and confusion, creating memories that will last a long time. It has been a long time, as the lyrics of The Long Water attest to, but time hasn't changed Stephen Fretwell one bit other than the hairline that he refers to in one of his self-deprecating moments.