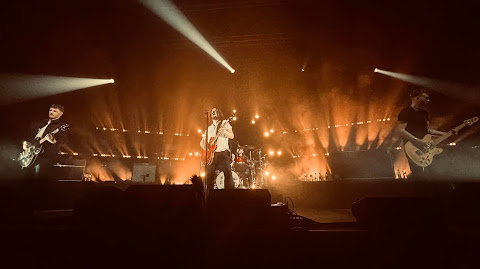 Courteeners brought their White Of Their Eyes tour to a sold-out Blackburn King George's Hall on Monday night where an ecstatic crowd shook off the start of the week blues with a ninety-minute run through old and new favourites. Support came from the impressive Vistas from Edinburgh.
With two albums, the recent What Were You Hoping To Find and last year's Everything Changes In The End, under their belt in the last two years Vistas have been fairly prolific and tonight's eight-song set takes a decent cross-section of them and combines them in a set which goes down a storm with the rapidly filling building as they play. Vocalist Prentice has a powerful voice that helps them fill the cavernous space of the King George's Hall and they've got the songs and the musicianship to match.
From opener Start Again through to the set-closing Tigerblood, their set never drops in intensity or quality, the songs managing to sound instantly familiar and engaging without every sounding cliched or repetitive. Big guitar riffs and pounding uplifting drums are ever-present yet delivered with a variety that keeps it interesting to a crowd that isn't theirs. Early singles Calm and Retrospect have been upgraded with a harder edge without losing the more accessible hooks and melodies that underpin the likes of the more recent What Were You Hoping To Find and Dayglow.
Even though it's a Monday night, the Blackburn crowd is up for it. There's plenty of football chanting goading local rivals from Burnley and Bolton and the extended moshpit is pretty much one heaving mass all evening. The tour has been entitled The Whites Of Their Eyes tour due to the intimate nature of these venues compared to Old Trafford Cricket Ground that they sold out in no time a few months ago, and tonight feels even more like a small show because they're back to a four-piece due to the illness-enforced absence of Elena on keyboards. Even the boomy sound in King George's Hall adds to that feel. 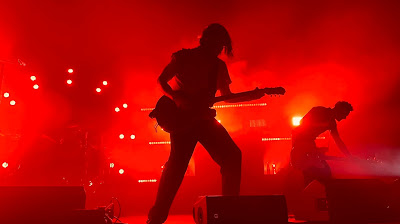 The setlist is a career-spanning one with the focus heavily on their debut St Jude and last year's More. Again. Forever calling off at most places in between. There's also space for one new song - Average Marriage - in the acoustic section of the set where Liam performs solo for three songs including old b-side Smiths Disco. It's the earlier tracks from St Jude in particular that get the most raucous of responses, which given that a significant portion of the crowd downstairs wouldn't have hit puberty at the time it was released is testament to the enduring nature of some of the songs from it.
Courteeners are often belittled by the Southern press as a Northern lads band that aren't as loved outside their home base whilst denying the power of "every last one of you" bouncing around to Not Nineteen Forever on a cold Monday night and a few thousand singing along to Hanging Off Your Cloud from More. Again. Forever. The latter is proof that they can still, despite detractors from even within their own fanbase who want St Jude on a loop, deliver a song that captures the imagination and hearts and minds. That proof is deepened by the likes of  Lose Control, Small Bones, The 17th and Modern Love that demonstrates they've got a significant body of work behind them that stands comparison to the fan favourites that inevitably finish off the evening. 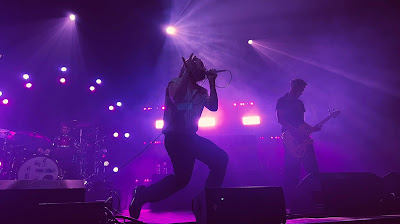 Liam's in animated form, prowling the stage like a man possessed, constantly referencing the love from the crowd and the power that them coming together to sing some of those songs as one gives them. You sense that if this wasn't his band, he'd be down there amongst the crowd somewhere bouncing along to them with everybody else. There's still a passion and a love of what they're doing evident here from the vitriolic spit of Cavorting, Acrylic and Cross My Heart And Hope To Fly to the more reflective One Day At A Time.
As a band, and Liam personally, Courteeners have been very quiet over the past eighteen months and tonight feels like them regrouping after the huge celebration of Old Trafford, resetting their base before moving forwards. The lack of much new material, whilst disappointing, is understandable given the audience's thirst for the headrush adrenaline shot of what they know. There will be a time and place for the new, but tonight is a reminder of just how powerful a live unit Courteeners have become - able to fill spaces much bigger than this one but still retaining a genuine connection with their audience.
Courteeners played Heart Attack, Are You In Love With A Notion, Cavorting, Cross My Heart And Hope To Fly, Acrylic, Hometown One, Small Bones, Lose Control, The 17th, Average Marriage, Please Don't, Smiths Disco, Hanging Off Your Cloud, Modern Love, One Day At A Time, Not Nineteen Forever and What Took You So Long?
Courteeners' website can be found here and they are on Facebook and Twitter. Liam Fray is on Twitter.
Vistas' official site can be found here and they are on Facebook and Twitter.
Photos - Justin Godson
________________________________
Follow Even The Stars on Twitter at @eventhestarsuk and like our Facebook page for all the latest updates
Posted by Even The Stars at 07:30