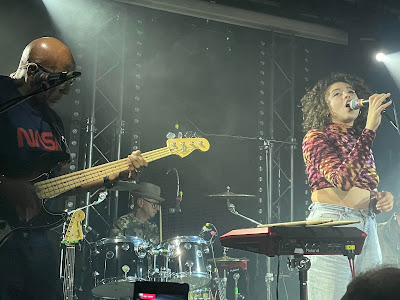 The phrase "snatching victory from the jaws of defeat" is one that's often thrown around and it'd be a perfect description of A Certain Ratio's homecoming show at Manchester Gorilla on Friday night. Technical problems nearly scuppered the whole show, but the band made the brave move of performing a curtailed hour-long set with half their kit not working to an appreciative crowd in what turned out to be a very special if unintentional evening.
A Certain Ratio's stage time of eight thirty came and went with a few worried members of crew and Gorilla staff on stage with a myriad of cables being plugged in then out, then interchanged to try and find why most of their kit wasn't working. As the clock ticked close to nine it became clear that there wasn't going to be an immediate solution and with a ten o'clock curfew for a club night that would follow, they took the decision to make the most of what they had and delivered a unique set that they made up as they went along, discussing the next song to play at the end of the previous one.
Adding to the risk was the fact that this was only Ellen Beth Abdi's sixth show with the band since she stepped into the enormous shoes vacated by Denise Johnson. Ellen took the right approach of not trying to replicate Denise's presence, because that would be impossible, but to stamp her own across the set which she did superbly both in terms of her vocals but also in the way she integrated into the band of men twice her age who produced some of these songs probably before she was born.
That she could is testament to A Certain Ratio's enduring appeal; the crowd tonight is full of veterans of their early Factory days to youngsters discovering their rich and diverse back catalogue which they cherry pick across the hour they're on stage. They've never quite had the acclaim that many of those they've influenced over the years have gone on to receive but there's a real palpable sense of love in the room and if anyone cares about the machine breakdowns and the curtailed set they're not voicing it. 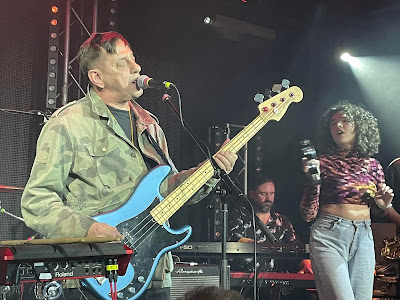 If that bothers them they clearly don't show it, choosing to immerse themselves into old favourites like Shack Up and Won't Stop Loving You, their cover of Talking Heads' Houses In Motion that they resurrected in 2019 after four decades and ACR Loco's Get A Grip where Ellen takes on Maria Uzor of Sink Ya Teeth's vocals. For a set that covers songs released over forty years there's a consistency in quality and their desire to make you move your feet that stands the test of time.
They finish with their traditional set-closer Si Firmi O Grido which at one point is just four cowbells, a whistle, a kick drum and a set of bongos, but which has the crowd moving along to it while Martin and Donald swap between drums and bongos during its course. They leave promising a cheaper Manchester gig in future to make up for the delays and the stripped back nature of the set, but there's no need as they've left us with a unique show that really demonstrated the enduring quality of the band and their songs, both new and old.
A Certain Ratio's website can be found here and they are on Facebook and Twitter.
Their tour continues at Stoke Sugarmill (November 6), York Crescent (7), Birmingham Hare And Hounds (9), Southampton Engine Rooms (10), Brighton Chalk (11), Bristol Exchange (12), London Earth (13), Preston The Ferret (15), Leeds Belgrave Music Hall (16), Glasgow King Tut's Wah Wah Hut (17), Rennes UBU (19), Brest Festival Invisible (20), Lorient Hydrophone (23), Nantes Stereoluxe (24), Bordeaux Rock School Barbery (25), Paris La Boule Noire (26), Besancon La Rodia (27) and Lille L'Aeronef (28)
________________________________
Follow Even The Stars on Twitter at @eventhestarsuk and like our Facebook page for all the latest updates
Posted by Even The Stars at 18:05

Email ThisBlogThis!Share to TwitterShare to FacebookShare to Pinterest
Labels: A Certain Ratio