Ist Ist - The Art Of Lying 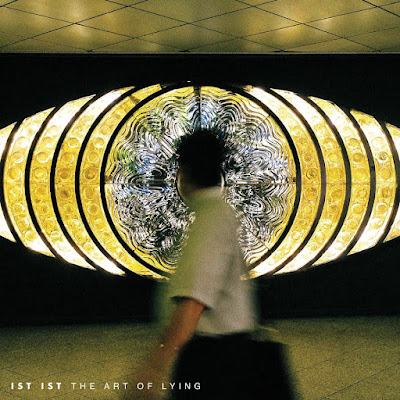 The Art Of Lying is the follow-up to 2020's Even The Stars album of the year Architecture which saw Ist Ist hit an impressive number 3 in the indie album chart, number 4 in the vinyl chart and number 5 in the physical chart, some achievement for a band that self-released and self-funded their debut, reliant on word of mouth and a growing live reputation that began to precede them. They wrote The Art Of Lying remotely and then in the rehearsal room once lockdown was eased and then quietly went into the studio at the end of 2020 to record it, revealing tracks on live streams and then at their recent preview shows.
While Architecture was imposingly introspective at times, The Art Of Lying sees Ist Ist open up a little more. The two pre-album singles Extreme Greed and It Stops Where It Starts wouldn't be out of place on daytime radio as would the bass-led Watching You Watching Me, Middle Distance and Fat Cats Drown In Milk without compromising on the power and intensity that's characterised them from their early days as a three-piece post-punk band to . And whilst The Art Of Lying doesn't deviate violently from the template they laid down on Architecture, it very much feels like they've made significant progression as a band.
If It Tastes Like Wine has an edge that reminds us of some of their very earliest work whilst Listening Through The Walls, The Waves and Heads On Spikes display their impressive control of the pace and tempo of a song, feeling both calculated and clinical without losing any of the passion and feeling that runs through their work. The album finishes on the foreboding electronic haze of Don't Go Gentle. Ist Ist take their music very seriously indeed and expect the same attention from the listener.
Everything about The Art Of Lying feels like a step up from Architecture without denigrating their debut. The guitars are more present giving the songs a harder edge. Adam's vocals are stronger whilst still feeling like he's living every single word as he sings them as is the lyrical content of the songs. The album feels more of a whole as a result of them being written in a shorter timeframe than the debut and fully as a four-piece. The recording and mastering (Gregg Caibi) is crystal clear too, their desire to present the best possible image of themselves once again very apparent.
The Art Of Lying is a mightily impressive body of work from a band who've ploughed their own path for the past six years with a fiercely independent streak and a very strong sense of identity to go with it. It is uncompromisingly a record that they've made for themselves, but which possesses the power and intensity to connect to a much wider audience, organically in their own way as evidenced by the sold-out signs going up on their tour dates but with the opportunity for so much more should the industry take a punt on them in the way they've done with some of their contemporaries.

The Art Of Lying is released on November 26 on black and cobalt blue vinyl, limited edition 2 disc vinyl with demos, CD and cassette and can be ordered via their website. A limited pink vinyl version of the album will be available at their shows.