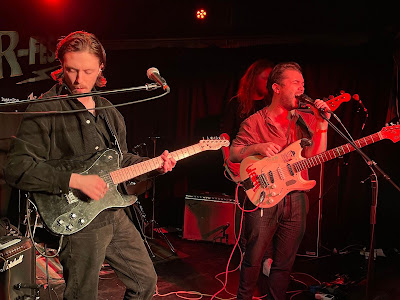 Bullet Girl opened up their first UK tour with a basement show at Manchester's Retro on Sunday night as part of the closing night of R-Fest. A seven-song set full of post-punk energy delighted a small but enthusiastic crowd that will talk about being there for years to come should they follow in the well-trodden path of their contemporaries.
There are people whose opinions on new bands you trust. When those who championed the likes of Fontaines DC and The Murder Capital right at the very start of their careers in previous incarnations of the bands get excited about another new band, you stop and listen. Bullet Girl come with those recommendations so were a must-see as they took to the Retro stage at seven-thirty on a cold Sunday night.
It doesn't take long for the expectations to be met and exceeded - they open with their new single The Hunt and the energy that the four-piece - front man Aaron, guitarist Dylan, bassist Tony and drummer Noel - create in such a small space is exhilarating to experience. The drums are punishingly fierce and upfront in the mix, the guitar riffs piercing right at the edge of distortion as Aaron barks out the lyrics like his very existence depends on them. It's at this point any of the aforementioned comparisons become nothing more than geographical - Bullet Girl are very much their own men, harder-edged and more brutal in their approach, and you can close your eyes and imagine thousands losing themselves in the cacophony rather than a couple of dozen of us being blown away by them. 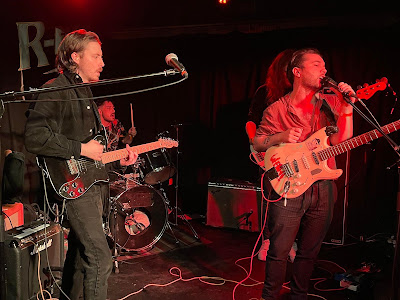 They mix a few of their singles released to date - the aforementioned The Hunt, Whacked and the set-closer Concrete Bed - with unreleased tracks - Paper Guns, McViolence, Parasites and Modern Chaos - some of which we assume will form the basis of their forthcoming debut EP set to land early next year.
Each of them possesses the same DNA but the make-up of the songs never follow the same pattern. They're driven along by a wild energy that builds in the verses and which becomes almost overwhelming in the choruses and a real sense of connection between the four of them which they manage to transmit without compromise to the audience who start off curious and end up totally engrossed. They do this while ensuring that each of the songs has its own personality - Parasites and the aptly-named Modern Chaos in particular stand-outs but there isn't a moment in the half hour where the intensity drops below fever-pitch.
Raw, powerful and uncompromising, Bullet Girl seem set to bulldoze any obstacles in their way.
Bullet Girl are on Facebook and Twitter. They play Sheffield Washington (November 17), London Amersham Arms (18), Glasgow Nice N Sleazy (20), London Fiddlers Elbow (21) and Dun Laoghaire Lighthouse (December 3).
________________________________