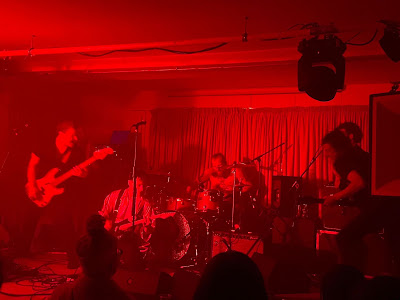 Avalanche Party continued their much-postponed tour on Wednesday night at Manchester Yes to a small but enthusiastic crowd that were delighted by a journey through their impressive collection of singles and debut album.
It's a poor turnout at Yes on a Wednesday night, a sign of the real problems facing touring bands right now. Whether it be clashes, forgotten tickets booked eighteen months ago, bands playing without new releases to support because of the vinyl and lockdown backlogs, a fear of COVID or alternative forms of entertainment discovered during lockdown, it seems to be having a big impact on live attendances and Avalanche Party seem to suffer from that more than most which does them a massive disservice.
Our attendance is last minute spur of the moment pay on the door so we miss the opening band Splint who get very positive feedback from our friends who were there early enough to see them so we make a mental note to find out more about them.
It's four years since we last saw Avalanche Party and in that intervening period they released their debut album 24 Carat Diamond Trephine in 2019 as well as a series of non-album singles which combined make up all of the set bar one new track, 2021. It's a tough time for bands coming back playing live now to decide whether, and both alternatives are equally valid, to possibly overwhelm an audience with new unfamiliar material or to ease them back in with the familiar - and Avalanche Party settled predominantly on the latter approach. 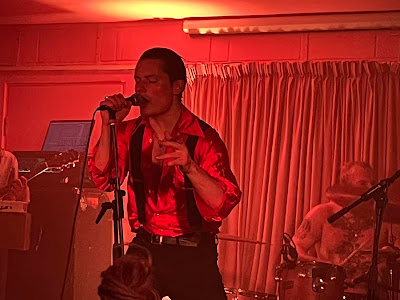 The intensity of the performance that Avalanche Party deliver really does need a hot and sweaty room with people crammed in tight to really be appreciated, but they play like that's exactly where they are, bidding us forward to try and recreate that feeling although the sheer volume that the six-piece create has some of us standing a little further back that allows us to appreciate them as a whole. The crowd response, warm, receptive and engaged, seems to spur them on as well.
They're at the best when they're at their most expansive and ambitious - moments in Milk And Sunlight Is A Heavy Dream and Howl when they take a less direct and obvious path in the course of the song are exciting and interesting and allow them to stand out from those that seek to overwhelm the crowd with volume and pace alone. Add to that Jordan's intense delivery, visually seemingly detached from his band mates, lost in his own world where the evening has taken him, but musically very much in keeping with his band mates Jared and Joe who add weight and depth to the songs with their backing vocals as well as also providing high-energy performances of their own while drummer Kane, shirtless two songs in, holds the cacophony of noise together masterfully.
Dream Johnny Dream takes us on a winding journey to conclude , stopping in its tracks with them chanting "deep in my mind there's a chain reaction" before one final aural onslaught that threatens to blow us all away such is its ferocious intent and reminds us of the sheer power the six of them possess and then they're gone into the night. The size of the crowd may have been disappointing, but Avalanche Party were everything but.
They played I'm So Wet, Milk And Sunlight Is A Heavy Dream, Porcelain, Rebel Forever, Howl, Obstacle, 2021, Million Dollar Man, Ha Ha, 7, Bugzy, Solid Gold and Dream Johnny Dream.
Avalanche Party's website can be found here and they are on Facebook and Twitter.
Their tour continues at Nottingham Angel Microbrewery (November 6), Bristol Louisiana (7), London The Black Heart (8), Stoke Sugarmill (9), Leeds Brudenell Social Club (10) and Sheffield Record Junkee (12).
________________________________
Follow Even The Stars on Twitter at @eventhestarsuk and like our Facebook page for all the latest updates
Posted by Even The Stars at 17:46