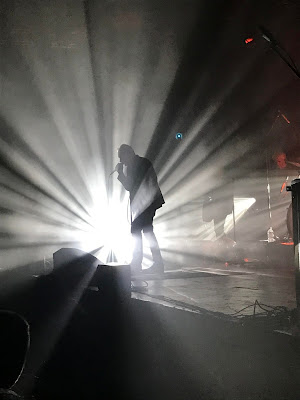 As the band walk on stage singer Jim Reid addresses the crowd “we are going to play Darklands tonight and I'm guessing you realise it's a short album so we're going to do two sets” before joking that they'll be going off for a cup of tea between sets! Jim explains the second set will be a mixed bag of A sides, B sides and obscure songs and this news goes down well with the audience. This is the first big night of the tour, following last night's low key warm up at nearby Stereo which unfortunately we didn't get a ticket for.

As they launch into the opening title track Darklands, a huge cheer goes up from the sold out capacity crowd. Looking around Scotland's premier venue, it's filled with a curious bunch. There are teenagers here. There are twentysomethings here. Indeed there are all ages here, including many fans who have faithfully followed Jim and William Reid's band since their inception nearly forty years ago.

That they can attract such a diverse audience is testimony to their legacy; those first two albums – Psychocandy (itself given the full album tour treatment several years ago) and Darklands – are often feature in the periodic “best albums of all time” polls. In addition, it appears that their influence is now stronger than ever. We saw them play a secret support slot here back in 1998. Back then, the wheels were coming off and they spilt months later. I felt their legacy then wasn't left as it should be. A decade later they were back and in recent years there's been a real resurgence.

Darklands the song is a strong opening and for many the highlight of the set. Somewhat surprising though is the sound in the venue. It might be crystal clear, but, by Mary Chain standards it is somewhat muted. The reflective Deep One Perfect Morning follows, getting another fantastic response from the crowd with drummer Brian Young knocking out a mean Spector Wall of Sound beat before the pace is turned up with a blistering Happy When It Rains. Happy When It Rains for me is one of the Mary Chain's finest ever moments. A perfect pop song and one that I can play on repeat. The crowd clearly agree with me and the response is the best of the night so far.

Down On Me and Fall raise the tempo and are as punk rock as ever. April Skies is another timeless piece of pop with the capacity crowd singing along. On The Wall and About You bring the album and first set to a close and are the most delicate songs on show this evening. To recreate a thirty-four year old album is no mean feat and The Mary Chain pull it off. The fact that they've been waiting eighteen months or so to deliver it only makes it all the more remarkable. Jim seems humbled by the response as About You draws to a close.

The promised second set has something for everyone and rather than going down the best of route they took when they toured Psychocandy, the band decide to challenge themselves and their audience with a more obscure set of songs. Opening with B-side Happy Place, it's such a high octane tune it's hard to comprehend that it was initially tucked away as the third track on a 12” single. It sounds incredibly fresh with both Reid brothers injecting ample enthusiasm into it. It's a tremendous opening for the second set and is followed up with another track from the same record Everything's Alright.

Can't Stop The Rock is the newest song to get an airing tonight, taken from their last album, Damage and Joy from 2017. It ably holds its own against the rest and serves as a reminder of how great that last album was. The county and western flavoured Come On, the second single from Stoned and Dethroned, shows what a diverse band the Mary Chain are and I Love Rock and Roll, one of their last great singles truly sparkles. It borders on glam rock and there's nothing wrong with that. Mo Tucker pays homage to the legendary Velvet Underground drummer and finally sees William's amps cranked up. There's elements of the Beach Boys on here too, as there is on the final track Kill Surf City, another classic B-side. The Mary Chain never shied away from their influences and we admire them for that. Jim is keen for an encore, which, given their early history is encouraging and they finally close with Never Understand.

The Jesus and Mary Chain are the real deal. They always have been. Tonight they demonstrated that once again. Other bands have come and gone yet The Mary Chain still shine brightly. No nonsense rock n roll like it should be.