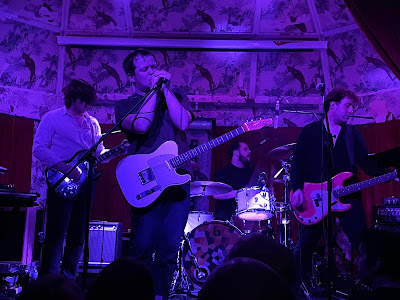 Ist Ist warmed up for their forthcoming tour and release of their second album The Art Of Lying on November 26th with their longest set to date, a twenty-one song marathon at the Deaf Institute in Manchester on Thursday night. Solis provided support with a solo set showcasing tracks from her forthcoming album.
Solis has been around the Manchester music scene for a few years now. We first saw her supporting Blossoms at Yes at a secret show in November 2018 where a pretty disrespectful crowd talked over her wonderfully intimate stripped back solo set. The Ist Ist crowd pay far more respect tonight and are rewarded with a six-song set, four taken from her forthcoming long-awaited album and two new ones. 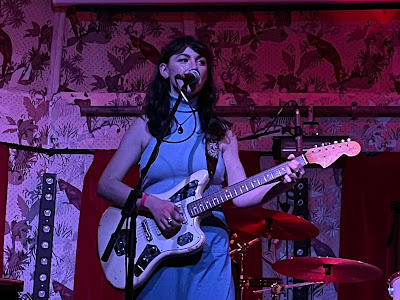 Her voice is the star here, the range allowing us to take in the emotion that you can hear pouring out of every syllable of songs like Jigsaw, Be Together, Mystic Man and Scenery. She struggles a little with the guitar she had to borrow at the last minute but it doesn't detract in any way from the really positive impact she has on a crowd that wouldn't ordinarily be classed as her target audience. We look forward to hearing these songs finally get released on the album and them being fleshed out with her band.
With their second album The Art Of Lying due for release in a couple of weeks and the dates in support of their debut Architecture finally scheduled for November and December, Ist Ist have a bit of a conundrum in having two albums worth of material plus some old favourites to play. Their solution, tonight at least, is to play a longer set incorporating nine of The Art Of Lying's ten tracks, some being played for the first time plus a selection of tracks from Architecture, their early EPs and a brand new song that post-dates the forthcoming album. The Deaf Institute, Manchester's best venue, is perfect for them. The sound is absolutely top-notch, the lighting superb and complementing the music.
The songs demonstrate the breadth of Ist Ist's sonic palette these days. From the brooding atmospheric synth-driven sounds of Under Your Skin, New Love Song and Preacher's Warning to the headrush adrenalin of If It Tastes Like Wine, Fat Cats Drown In Milk and You're Mine, Ist Ist can move effortlessly up and down through the gears, sometimes in the same song as the calculated yet potently powerful Slowly We Escape at the end of the set demonstrates.
The new material, in the main, is more guitar-based than their predecessors but feels like a progression in their sound, a natural evolution and development than a reinvention. They've brought backing vocals into play much more, particularly noticeable on opener Listening Through The Walls and on the new track Fools Paradise which provides an interesting insight into their next move with Andy providing vocals in the chorus. He passes comment towards the end of the set that they've been cranking up their guitars during lockdown and it very much shows. 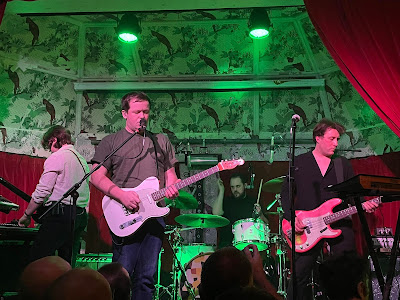 They still have the moments of brooding introspection. Emily, a song right back from their earliest days, soars and shimmers like the great lost single it was and feels timeless, whilst Black, which finishes the main set, and It Stops Where It Starts in a more brutal clinical manner both possess a helpless resigned bruised romanticism that bands from this city seem to specialise in, each in their own way.
Ist Ist still feel like a secret, albeit one that more people are becoming wise to. Even with a twenty-one song set, there's a dozen songs you could list that wouldn't be out of place in their set such is the strength of their body of work already. They're in their element in the live environment, assured, confident and with a smidgeon of the arrogance that great bands have in the knowledge that what they're doing matters.
Ist Ist played Listening Through The Walls, Extreme Greed, Fat Cats Drown In Milk, Emily, Night's Arm, Discipline, Under Your Skin, Fools Paradise, Preacher's Warning, I'm Not Here, If It Tastes Like Wine, New Love Song, Watching You Watching Me, Middle Distance, The Waves, Heads On Spikes, Black, Wolves, You're Mine, It Stops Where It Starts and Slowly We Escape.

The Art Of Lying is released on November 26 on black and cobalt blue vinyl, limited edition 2 disc vinyl with demos, CD and cassette and can be ordered via their website